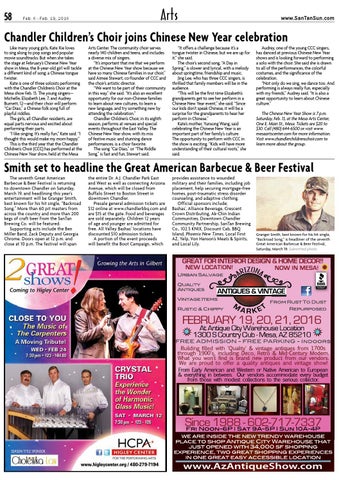 Chandler Children’s Choir joins Chinese New Year celebration Like many young girls, Kate Xie loves to sing along to pop songs and popular movie soundtracks. But when she takes the stage at February’s Chinese New Year show in Mesa, the 8-year-old girl will tackle a different kind of song: a Chinese tongue twister. Kate is one of three soloists performing with the Chandler Children’s Choir at the Mesa show Feb. 13. The young singers— Michelle, Elizabeth Lee, 7, and Audrey Burnett, 12—and their choir will perform “Cai Diao,” a Chinese folk song full of playful riddles. The girls, all Chandler residents, are equal parts nervous and excited about performing their parts. “I like singing. It’s really fun,” Kate said. “I thought this would make my mom happy.” This is the third year that the Chandler Children’s Choir (CCC) has performed at the Chinese New Year show, held at the Mesa

Arts Center. The community choir serves nearly 140 children and teens, and includes a diverse mix of singers. “It’s important that me that we perform at the Chinese New Year show because we have so many Chinese families in our choir,” said Aimee Stewart, co-founder of CCC and the choir’s artistic director. “We want to be part of their community in this way,” she said. “It’s also an excellent opportunity for our non-Chinese families to learn about new cultures, to learn a new language, and try something new by attending the celebration.” Chandler Children’s Choir, in its eighth season, performs at venues and special events throughout the East Valley. The Chinese New Year show, with its mix of festive music and stunning dance performances, is a choir favorite. The song “Cai Diao,” or “The Riddle Song,” is fast and fun, Stewart said.

“It offers a challenge because it’s a tongue twister in Chinese, but we are up for it,” she said. The choir’s second song, “A Day in Spring,” is slower and lyrical, with a melody about springtime, friendship and music. Jing Lee, who has three CCC singers, is thrilled that family members will be in the audience. “This will be the first time Elizabeth’s grandparents get to see her perform in a Chinese New Year event,” she said. “Since our kids don’t speak Chinese, it will be a surprise for the grandparents to hear her perform in Chinese.” Kate’s mother, Yunsong Wang, said celebrating the Chinese New Year is an important part of her family’s culture. The opportunity to perform with CCC in the show is exciting. “Kids will have more understanding of their cultural roots,” she said.

Audrey, one of the young CCC singers, has danced at previous Chinese New Year shows and is looking forward to performing a solo with the choir. She said she is drawn to all of the performances, the colorful costumes, and the significance of the celebration. “Not only do we sing, we dance too. And performing is always really fun, especially with my friends,” Audrey said. “It is also a great opportunity to learn about Chinese culture.” The Chinese New Year Show is 7 p.m. Saturday, Feb. 13, at the Mesa Arts Center, One E. Main St., Mesa. Tickets are $20 to $30. Call (480) 644-6500 or visit www. mesaartscenter.com for more information. Visit www.chandlerchildrenschoir.com to learn more about the group.

Smith set to headline the Great American Barbecue &amp; Beer Festival The seventh Great American Barbecue &amp; Beer Festival is returning to downtown Chandler on Saturday, March 19, and headlining this year’s entertainment will be Granger Smith, best known for his hit single, “Backroad Song.” More than 60 pit masters from across the country and more than 200 kegs of craft beer from the SanTan Brewing Co. will be featured. Supporting acts include the Ben Miller Band, Zack Deputy and Georgia Chrome. Doors open at 12 p.m. and close at 10 p.m. The festival will span

the entire Dr. A.J. Chandler Park East and West as well as connecting Arizona Avenue, which will be closed from Buffalo Street to Boston Street in downtown Chandler. Presale general admission tickets are $12 online at www.chandlerbbq.com and are $15 at the gate. Food and beverages are sold separately. Children 12 years of age and younger are admitted for free. All Valley Bashas’ locations have discounted $10 admission tickets. A portion of the event proceeds will benefit the Boot Campaign, which