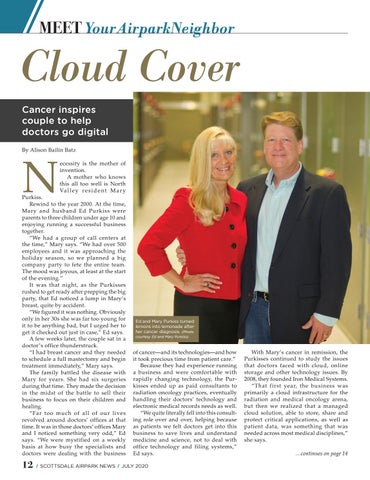 By Alison Bailin Batz ecessity is the mother of invention. A mother who knows this all too well is North Va l l e y r e s i d e n t M a r y

Purkiss. Rewind to the year 2000. At the time, Mary and husband Ed Purkiss were parents to three children under age 10 and enjoying running a successful business together. “We had a group of call centers at the time,” Mary says. “We had over 500 employees and it was approaching the holiday season, so we planned a big company party to fete the entire team. The mood was joyous, at least at the start of the evening.” It was that night, as the Purkisses rushed to get ready after prepping the big party, that Ed noticed a lump in Mary’s breast, quite by accident. “We figured it was nothing. Obviously only in her 30s she was far too young for it to be anything bad, but I urged her to get it checked out just in case,” Ed says. A few weeks later, the couple sat in a doctor’s office thunderstruck. “I had breast cancer and they needed to schedule a full mastectomy and begin treatment immediately,” Mary says. The family battled the disease with Mary for years. She had six surgeries during that time. They made the decision in the midst of the battle to sell their business to focus on their children and healing. “Far too much of all of our lives revolved around doctors’ offices at that time. It was in those doctors’ offices Mary and I noticed something very odd,” Ed says. “We were mystified on a weekly basis at how busy the specialists and doctors were dealing with the business

of cancer—and its technologies—and how it took precious time from patient care.” Because they had experience running a business and were comfortable with rapidly changing technology, the Purkisses ended up as paid consultants to radiation oncology practices, eventually handling their doctors’ technology and electronic medical records needs as well. “We quite literally fell into this consulting role over and over, helping because as patients we felt doctors get into this business to save lives and understand medicine and science, not to deal with office technology and filing systems,” Ed says.

With Mary’s cancer in remission, the Purkisses continued to study the issues that doctors faced with cloud, online storage and other technology issues. By 2008, they founded Iron Medical Systems. “That first year, the business was primarily a cloud infrastructure for the radiation and medical oncology arena, but then we realized that a managed cloud solution, able to store, share and protect critical applications, as well as patient data, was something that was needed across most medical disciplines,” she says. …continues on page 14