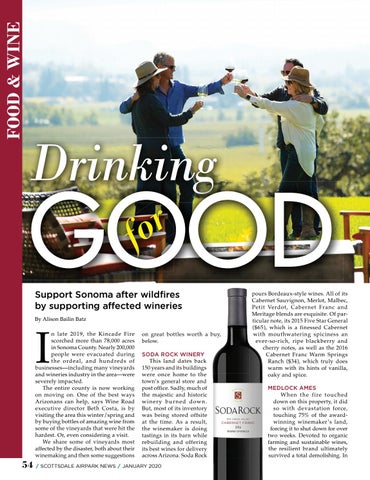 By Alison Bailin Batz n late 2019, the Kincade Fire scorched more than 78,000 acres in Sonoma County. Nearly 200,000 people were evacuated during the ordeal, and hundreds of businesses—including many vineyards and wineries industry in the area—were severely impacted. The entire county is now working on moving on. One of the best ways Arizonans can help, says Wine Road executive director Beth Costa, is by visiting the area this winter/spring and by buying bottles of amazing wine from some of the vineyards that were hit the hardest. Or, even considering a visit. We share some of vineyards most affected by the disaster, both about their winemaking and then some suggestions

on great bottles worth a buy, below. SODA ROCK WINERY This land dates back 150 years and its buildings were once home to the town’s general store and post office. Sadly, much of the majestic and historic w i n e r y b urne d do w n. But, most of its inventory was being stored offsite at the time. As a result, the winemaker is doing tastings in its barn while rebuilding and offering its best wines for delivery across Arizona. Soda Rock

pours Bordeaux-style wines. All of its Cabernet Sauvignon, Merlot, Malbec, Petit Verdot, Cabernet Franc and Meritage blends are exquisite. Of particular note, its 2015 Five Star General ($65), which is a finessed Cabernet with mouthwatering spiciness an ever-so-rich, ripe blackberry and cherry notes, as well as the 2016 Cabernet Franc Warm Springs Ranch ($34), which truly does warm with its hints of vanilla, oaky and spice. MEDLOCK AMES When the fire touched down on this property, it did so with devastation force, touching 75% of the awardwinning winemaker ’s land, forcing it to shut down for over two weeks. Devoted to organic farming and sustainable wines, the resilient brand ultimately survived a total demolishing. In