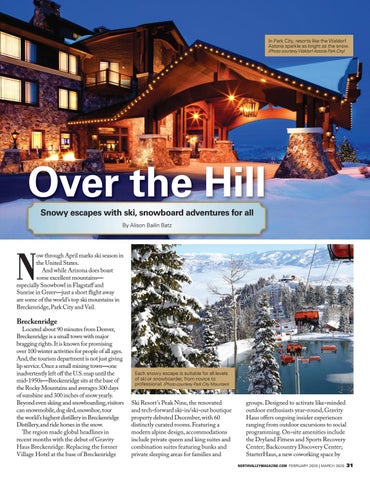 Over the Hill Snowy escapes with ski, snowboard adventures for all By Alison Bailin Batz

ow through April marks ski season in the United States. And while Arizona does boast some excellent mountains— especially Snowbowl in Flagstaff and Sunrise in Greer—just a short flight away are some of the world’s top ski mountains in Breckenridge, Park City and Vail.

Located about 90 minutes from Denver, Breckenridge is a small town with major bragging rights. It is known for promising over 100 winter activities for people of all ages. And, the tourism department is not just giving lip service. Once a small mining town—one inadvertently left off the U.S. map until the mid-1950s—Breckenridge sits at the base of the Rocky Mountains and averages 300 days of sunshine and 300 inches of snow yearly. Beyond even skiing and snowboarding, visitors can snowmobile, dog sled, snowshoe, tour the world’s highest distillery in Breckenridge Distillery, and ride horses in the snow. The region made global headlines in recent months with the debut of Gravity Haus Breckenridge. Replacing the former Village Hotel at the base of Breckenridge

Each snowy escape is suitable for all levels of ski or snowboarder, from novice to professional. (Photo courtesy Park City Mountain)