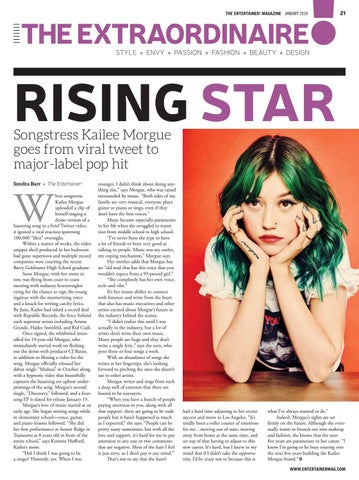 hen songstress Kailee Morgue uploaded a clip of herself singing a demo version of a haunting song in a brief Twitter video, it ignited a viral reaction spawning 100,000 “likes” overnight. Within a matter of weeks, the video snippet she’d produced in her bedroom had gone supernova and multiple record companies were courting the recent Barry Goldwater High School graduate. Soon Morgue, with her mom in tow, was flying from coast to coast meeting with industry heavyweights vying for the chance to sign the young ingénue with the mesmerizing voice and a knack for writing catchy lyrics. By June, Kailee had inked a record deal with Republic Records, the force behind such superstar artists including Ariana Grande, Hailee Steinfeld, and Kid Cudi. Once signed, the whirlwind intensified for 19-year-old Morgue, who immediately started work on fleshing out the demo with producer CJ Baran, in addition to filming a video for the song. Morgue officially released her debut single “Medusa” in October along with a hypnotic video that beautifully captures the haunting yet upbeat underpinnings of the song. Morgue’s second single, “Discovery,” followed, and a foursong EP is slated for release January 19. Morgue’s love of music started at an early age. She began writing songs while in elementary school––voice, guitar, and piano lessons followed. “She did her first performance at Sunset Ridge in Tramonto at 8 years old in front of the entire school,” says Kimmie Hufford, Kailee’s mom. “Did I think I was going to be a singer? Honestly, yes. When I was

younger, I didn’t think about doing anything else,” says Morgue, who was raised surrounded by music. “Both sides of my family are very musical, everyone plays guitar or piano or sings, even if they don’t have the best voices.” Music became especially paramount in her life when she struggled to transition from middle school to high school. “I’ve never been the type to have a lot of friends or been very good at talking to people. Music was my outlet, my coping mechanism,” Morgue says. Her mother adds that Morgue has an “old soul that has this voice that you wouldn’t expect from a 95-pound girl.” “She completely has her own voice, style and vibe.” It’s her innate ability to connect with listeners and write from the heart that also has music executives and other artists excited about Morgue’s future in the industry behind the scenes. “I didn’t realize this until I was actually in the industry, but a lot of artists don’t write their own music. Many people are huge and they don’t write a single lyric,” says the teen, who pens three or four songs a week. With an abundance of songs she writes at her fingertips, she’s looking forward to pitching the ones she doesn’t use to other artists. Morgue writes and sings from such a deep well of emotion that there are bound to be naysayers. “When you have a bunch of people paying attention to you, along with all that support, there are going to be rude people but it hasn’t happened as much as I expected,” she says. “People can be pretty nasty sometimes, but with all the love and support, it’s hard for me to pay attention to any one or two comments that are negative. Most of the hate I feel is just envy, so I don’t pay it any mind.” That’s not to say that she hasn’t

had a hard time adjusting to her recent success and move to Los Angeles. “It’s totally been a roller coaster of emotions for me…moving out of state, moving away from home at the same time, and on top of that having to adjust to this new career. It’s hard, but I knew in my mind that if I didn’t take the opportunity, I’d be crazy not to because this is

what I’ve always wanted to do.” Indeed, Morgue’s sights are set firmly on the future. Although she eventually wants to branch out into makeup and fashion, she knows that the next five years are paramount to her career. “I know I’m going to be busy touring over the next five years building the Kailee Morgue brand.” WWW.ENTERTAINERMAG.COM