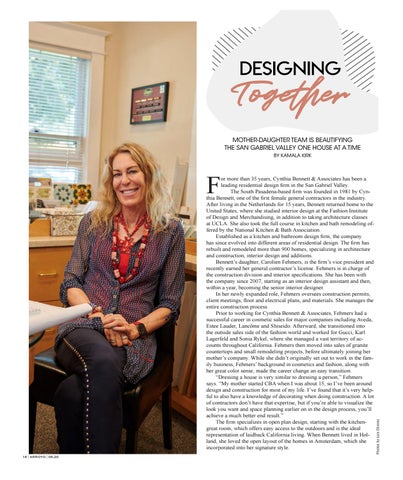 or more than 35 years, Cynthia Bennett & Associates has been a leading residential design firm in the San Gabriel Valley. The South Pasadena-based firm was founded in 1981 by Cynthia Bennett, one of the first female general contractors in the industry. After living in the Netherlands for 15 years, Bennett returned home to the United States, where she studied interior design at the Fashion Institute of Design and Merchandising, in addition to taking architecture classes at UCLA. She also took the full course in kitchen and bath remodeling offered by the National Kitchen & Bath Association. Established as a kitchen and bathroom design firm, the company has since evolved into different areas of residential design. The firm has rebuilt and remodeled more than 900 homes, specializing in architecture and construction, interior design and additions. Bennett’s daughter, Carolien Fehmers, is the firm’s vice president and recently earned her general contractor’s license. Fehmers is in charge of the construction division and interior specifications. She has been with the company since 2007, starting as an interior design assistant and then, within a year, becoming the senior interior designer. In her newly expanded role, Fehmers oversees construction permits, client meetings, floor and electrical plans, and materials. She manages the entire construction process. Prior to working for Cynthia Bennett & Associates, Fehmers had a successful career in cosmetic sales for major companies including Aveda, Estee Lauder, Lancôme and Shiseido. Afterward, she transitioned into the outside sales side of the fashion world and worked for Gucci, Karl Lagerfeld and Sonia Rykel, where she managed a vast territory of accounts throughout California. Fehmers then moved into sales of granite countertops and small remodeling projects, before ultimately joining her mother’s company. While she didn’t originally set out to work in the family business, Fehmers’ background in cosmetics and fashion, along with her great color sense, made the career change an easy transition. “Dressing a house is very similar to dressing a person,” Fehmers says. “My mother started CBA when I was about 15, so I’ve been around design and construction for most of my life. I’ve found that it’s very helpful to also have a knowledge of decorating when doing construction. A lot of contractors don’t have that expertise, but if you’re able to visualize the look you want and space planning earlier on in the design process, you’ll achieve a much better end result.” The firm specializes in open plan design, starting with the kitchengreat room, which offers easy access to the outdoors and is the ideal representation of laidback California living. When Bennett lived in Holland, she loved the open layout of the homes in Amsterdam, which she incorporated into her signature style.