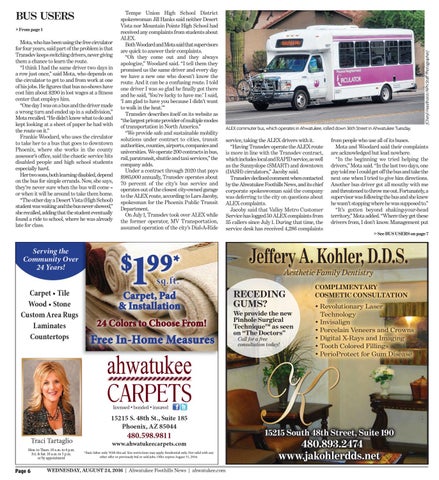 Mota, who has been using the free circulator for four years, said part of the problem is that Transdev keeps switching drivers, never giving them a chance to learn the route. “I think I had the same driver two days in a row just once,” said Mota, who depends on the circulator to get to and from work at one of his jobs. He figures that bus no-shows have cost him about $200 in lost wages at a fitness center that employs him. “One day I was on a bus and the driver made a wrong turn and ended up in a subdivision,” Mota recalled. “He didn’t know what to do and kept looking at a sheet of paper he had with the route on it.” Frankie Woodard, who uses the circulator to take her to a bus that goes to downtown Phoenix, where she works in the county assessor’s office, said the chaotic service hits disabled people and high school students especially hard. Her two sons, both learning disabled, depend on the bus for simple errands. Now, she says, they’re never sure when the bus will come – or when it will be around to take them home. “The other day a Desert Vista (High School) student was waiting and the bus never showed,” she recalled, adding that the student eventually found a ride to school, where he was already late for class.

Tempe Union High School District spokeswoman Jill Hanks said neither Desert Vista nor Mountain Pointe High School had received any complaints from students about ALEX. Both Woodard and Mota said that supervisors are quick to answer their complaints. “Oh they come out and they always apologize,” Woodard said. “I tell them they promised us the same driver and every day we have a new one who doesn’t know the route. And it can be a confusing route. I told one driver I was so glad he finally got there and he said, ‘You’re lucky to have me.’ I said, ‘I am glad to have you because I didn’t want to walk in the heat.’” Transdev describes itself on its website as “the largest private provider of multiple modes of transportation in North America.” “We provide safe and sustainable mobility solutions under contract to cities, transit authorities, counties, airports, companies and universities. We operate 200 contracts in bus, rail, paratransit, shuttle and taxi services,” the company adds. Under a contract through 2020 that pays $985,000 annually, Transdev operates about 70 percent of the city’s bus service and operates out of the closest city-owned garage to the ALEX route, according to Lars Jacoby, spokesman for the Phoenix Public Transit Department. On July 1, Transdev took over ALEX while the former operator, MV Transportation, assumed operation of the city’s Dial-A-Ride

service, taking the ALEX drivers with it. “Having Transdev operate the ALEX route is more in line with the Transdev contract, which includes local and RAPID service, as well as the Sunnyslope (SMART) and downtown (DASH) circulators,” Jacoby said. Transdev declined comment when contacted by the Ahwatukee Foothills News, and its chief corporate spokeswoman said the company was deferring to the city on questions about ALEX complaints. Jacoby said that Valley Metro Customer Service has logged 50 ALEX complaints from 35 callers since July 1. During that time, the service desk has received 4,286 complaints

from people who use all of its buses. Mota and Woodard said their complaints are acknowledged but lead nowhere. “In the beginning we tried helping the drivers,” Mota said. “In the last two days, one guy told me I could get off the bus and take the next one when I tried to give him directions. Another bus driver got all mouthy with me and threatened to throw me out. Fortunately, a supervisor was following the bus and she knew he wasn’t stopping where he was supposed to.” “It’s gotten beyond shaking-your-head territory,” Mota added. “Where they get these drivers from, I don’t know. Management put >> See BUS USERS on page 7

RECEDING GUMS? We provide the new Pinhole Surgical Technique™ as seen on “The Doctors” Call for a free consultation today!

15215 South 48th Street, Suite 190 *Basic labor only. With this ad. Size restrictions may apply. Residential only. Not valid with any other offer or previously bid or sold jobs. Offer expires August 31, 2016.