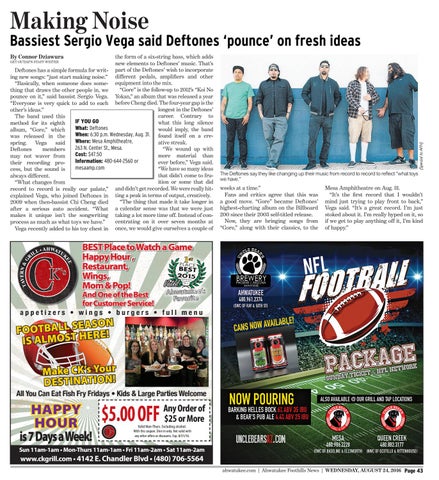 the form of a six-string bass, which adds new elements to Deftones’ music. That’s Deftones has a simple formula for writ- part of the Deftones’ wish to incorporate ing new songs: “just start making noise.” different pedals, amplifiers and other “Basically, when someone does some- equipment into the mix. “Gore” is the follow-up to 2012’s “Koi No thing that draws the other people in, we pounce on it,” said bassist Sergio Vega. Yokan,” an album that was released a year “Everyone is very quick to add to each before Cheng died. The four-year gap is the longest in the Deftones’ other’s ideas.” career. Contrary to The band used this IF YOU GO what this long silence method for its eighth What: Deftones would imply, the band album, “Gore,” which When: 6:30 p.m. Wednesday, Aug. 31. found itself on a crewas released in the Where: Mesa Amphitheatre, ative streak. spring. Vega said 263 N. Center St., Mesa. “We wound up with Deftones members Cost: $47.50 more material than may not waver from Information: 480-644-2560 or ever before,” Vega said. their recording promesaamp.com “We have so many ideas cess, but the sound is that didn’t come to frualways different. ition or some that did “What changes from record to record is really our palate,” and didn’t get recorded. We were really hitexplained Vega, who joined Deftones in ting a peak in terms of output, creatively. “The thing that made it take longer in 2009 when then-bassist Chi Cheng died after a serious auto accident. “What a calendar sense was that we were just makes it unique isn’t the songwriting taking a lot more time off. Instead of concentrating on it over seven months at process as much as what toys we have.” Vega recently added to his toy chest in once, we would give ourselves a couple of

The Deftones say they like changing up their music from record to record to reflect “what toys we have.”

weeks at a time.” Fans and critics agree that this was a good move. “Gore” became Deftones’ highest-charting album on the Billboard 200 since their 2003 self-titled release. Now, they are bringing songs from “Gore,” along with their classics, to the

Mesa Amphitheatre on Aug. 31. “It’s the first record that I wouldn’t mind just trying to play front to back,” Vega said. “It’s a great record. I’m just stoked about it. I’m really hyped on it, so if we get to play anything off it, I’m kind of happy.”

BEST Place to Watch a Game Happy Hour , Restaurant, Wings, Voted Mom & Pop! ee’s And One of the Best for Customer Service!

HAPPY HOUR is 7 Days a Week!

With this coupon. Dine in only. Not valid with any other offers or discounts. Exp. 8/31/16.