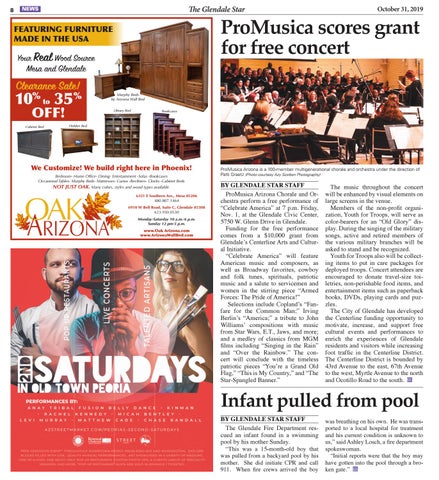 FEATURING FURNITURE MADE IN THE USA

BY GLENDALE STAR STAFF ProMusica Arizona Chorale and Orchestra perform a free performance of “Celebrate America” at 7 p.m. Friday, Nov. 1, at the Glendale Civic Center, 5750 W. Glenn Drive in Glendale. Funding for the free performance comes from a $10,000 grant from Glendale’s Centerline Arts and Cultural Initiative. “Celebrate America” will feature American music and composers, as well as Broadway favorites, cowboy and folk tunes, spirituals, patriotic music and a salute to servicemen and women in the stirring piece “Armed Forces: The Pride of America!” Selections include Copland’s “Fanfare for the Common Man;” Irving Berlin’s “America;” a tribute to John Williams’ compositions with music from Star Wars, E.T., Jaws, and more; and a medley of classics from MGM films including “Singing in the Rain” and “Over the Rainbow.” The concert will conclude with the timeless patriotic pieces “You’re a Grand Old Flag,” “This is My Country,” and “The Star-Spangled Banner.”

The music throughout the concert will be enhanced by visual elements on large screens in the venue. Members of the non-profit organization, Youth for Troops, will serve as color-bearers for an “Old Glory” display. During the singing of the military songs, active and retired members of the various military branches will be asked to stand and be recognized. Youth for Troops also will be collecting items to put in care packages for deployed troops. Concert attendees are encouraged to donate travel-size toiletries, non-perishable food items, and entertainment items such as paperback books, DVDs, playing cards and puzzles. The City of Glendale has developed the Centerline funding opportunity to motivate, increase, and support free cultural events and performances to enrich the experiences of Glendale residents and visitors while increasing foot traffic in the Centerline District. The Centerline District is bounded by 43rd Avenue to the east, 67th Avenue to the west, Myrtle Avenue to the north and Ocotillo Road to the south.

BY GLENDALE STAR STAFF The Glendale Fire Department rescued an infant found in a swimming pool by his mother Sunday. “This was a 15-month-old boy that was pulled from a backyard pool by his mother. She did initiate CPR and call 911. When fire crews arrived the boy

was breathing on his own. He was transported to a local hospital for treatment and his current condition is unknown to us,” said Ashley Losch, a fire department spokeswoman. “Initial reports were that the boy may have gotten into the pool through a broken gate.”