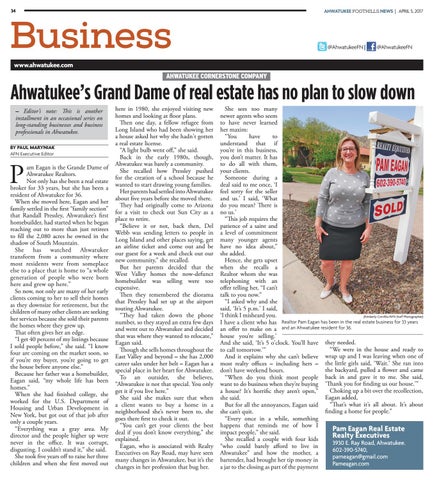 Ahwatukee’s Grand Dame of real estate has no plan to slow down – Editor’s note: This is another installment in an occasional series on long-standing businesses and business professionals in Ahwatukee. BY PAUL MARYNIAK AFN Executive Editor

am Eagan is the Grande Dame of Ahwatukee Realtors. Not only has she been a real estate broker for 33 years, but she has been a resident of Ahwatukee for 36. When she moved here, Eagan and her family settled in the first “family section” that Randall Pressley, Ahwatukee’s first homebuilder, had started when he began reaching out to more than just retirees to fill the 2,080 acres he owned in the shadow of South Mountain. She has watched Ahwatukee transform from a community where most residents were from someplace else to a place that is home to “a whole generation of people who were born here and grew up here.” So now, not only are many of her early clients coming to her to sell their homes as they downsize for retirement, but the children of many other clients are seeking her services because she sold their parents the homes where they grew up. That often gives her an edge. “I get 40 percent of my listings because I sold people before,” she said. “I know four are coming on the market soon, so if you’re my buyer, you’re going to get the house before anyone else.” Because her father was a homebuilder, Eagan said, “my whole life has been homes.” When she had finished college, she worked for the U.S. Department of Housing and Urban Development in New York, but got out of that job after only a couple years. “Everything was a gray area. My director and the people higher up were never in the office. It was corrupt, disgusting. I couldn’t stand it,” she said. She took five years off to raise her three children and when she first moved out

here in 1980, she enjoyed visiting new homes and looking at floor plans. Then one day, a fellow refugee from Long Island who had been showing her a house asked her why she hadn't gotten a real estate license. “A light bulb went off,” she said. Back in the early 1980s, though, Ahwatukee was barely a community. She recalled how Pressley pushed for the creation of a school because he wanted to start drawing young families. Her parents had settled into Ahwatukee about five years before she moved there. They had originally come to Arizona for a visit to check out Sun City as a place to retire. “Believe it or not, back then, Del Webb was sending letters to people in Long Island and other places saying, get an airline ticket and come out and be our guest for a week and check out our new community,” she recalled. But her parents decided that the West Valley homes the now-defunct homebuilder was selling were too expensive. Then they remembered the diorama that Pressley had set up at the airport touting Ahwatukee. “They had taken down the phone number, so they stayed an extra few days and went out to Ahwatukee and decided that was where they wanted to relocate,” Eagan said. Though she sells homes throughout the East Valley and beyond – she has 2,000 career sales under her belt – Eagan has a special place in her heart for Ahwatukee. To an outsider, she believes, “Ahwatukee is not that special. You only get it if you live here.” She said she makes sure that when a client wants to buy a home in a neighborhood she’s never been to, she goes there first to check it out. “You can’t get your clients the best deal if you don’t know everything,” she explained. Eagan, who is associated with Realty Executives on Ray Road, may have seen many changes in Ahwatukee, but it’s the changes in her profession that bug her.

She sees too many newer agents who seem to have never learned her maxim: “You have to understand that if you’re in this business, you don’t matter. It has to do all with them, your clients. Someone during a deal said to me once, ‘I feel sorry for the seller and us.’ I said, ‘What do you mean? There is no us.’ “This job requires the patience of a saint and a level of commitment many younger agents have no idea about,” she added. Hence, she gets upset when she recalls a Realtor whom she was telephoning with an offer telling her, “I can’t talk to you now.” “I asked why and she said, ‘It’s 5 p.m.’ I said, ‘I think I misheard you. (Kimberly Carrillo/AFN Staff Photographer) I have a client who has Realtor Pam Eagan has been in the real estate business for 33 years an offer to make on a and an Ahwatukee resident for 36. house you’re selling.’ And she said, ‘It’s 5 o’clock. You’ll have they needed. “We were in the house and ready to to call tomorrow.’” And it explains why she can’t believe wrap up and I was leaving when one of most realty offices – including hers – the little girls said, ‘Wait.’ She ran into the backyard, pulled a flower and came don’t have weekend hours. “When do you think most people back in and gave it to me. She said, want to do business when they’re buying ‘Thank you for finding us our house.’” Choking up a bit over the recollection, a house? It’s horrific they aren’t open,” Eagan added, she said. “That’s what it’s all about. It’s about But for all the annoyances, Eagan said finding a home for people.” she can’t quit. “Every once in a while, something happens that reminds me of how I Pam Eagan Real Estate impact people,” she said. Realty Executives She recalled a couple with four kids 3930 E. Ray Road, Ahwatukee. “who could barely afford to live in 602-390-5740, Ahwatukee” and how the mother, a pameagan@gmail.com bartender, had brought her tip money in Pameagan.com a jar to the closing as part of the payment