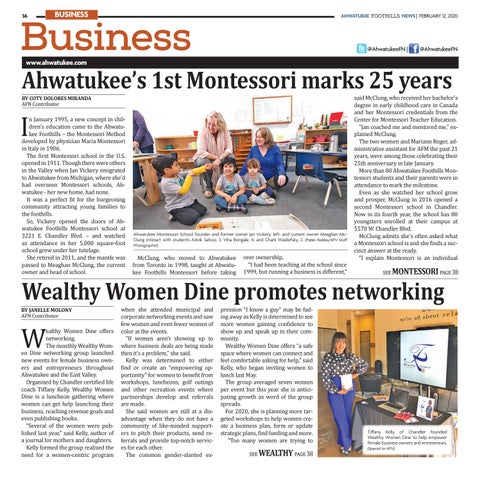 n January 1995, a new concept in children’s education came to the Ahwatukee Foothills – the Montessori Method developed by physician Maria Montessori in Italy in 1906. The first Montessori school in the U.S. opened in 1911. Though there were others in the Valley when Jan Vickery emigrated to Ahwatukee from Michigan, where she’d had overseen Montessori schools, Ahwatukee - her new home, had none. It was a perfect fit for the burgeoning community attracting young families to the foothills. So, Vickery opened the doors of Ahwatukee Foothills Montessori school at 3221 E. Chandler Blvd. – and watched as attendance in her 5,000 square-foot school grew under her tutelage. She retired in 2011, and the mantle was passed to Meaghan McClung, the current owner and head of school.

McClung, who moved to Ahwatukee from Toronto in 1998, taught at Ahwatukee Foothills Montessori before taking

over ownership. “I had been teaching at the school since 1999, but running a business is different,”

said McClung, who received her bachelor’s degree in early childhood care in Canada and her Montessori credentials from the Center for Montessori Teacher Education. “Jan coached me and mentored me,” explained McClung. The two women and Mariann Roger, administrative assistant for AFM the past 21 years, were among those celebrating their 25th anniversary in late January. More than 80 Ahwatukee Foothills Montessori students and their parents were in attendance to mark the milestone. Even as she watched her school grow and prosper, McClung in 2016 opened a second Montessori school in Chandler. Now in its fourth year, the school has 80 youngsters enrolled at their campus at 5570 W. Chandler Blvd. McClung admits she’s often asked what a Montessori school is and she finds a succinct answer at the ready. “I explain Montessori is an individual

ealthy Women Dine offers networking. The monthly Wealthy Women Dine networking group launched new events for female business owners and entrepreneurs throughout Ahwatukee and the East Valley. Organized by Chandler certified life coach Tiffany Kelly, Wealthy Women Dine is a luncheon gathering where women can get help launching their business, reaching revenue goals and even publishing books. “Several of the women were published last year,” said Kelly, author of a journal for mothers and daughters. Kelly formed the group realized the need for a women-centric program

when she attended municipal and corporate networking events and saw few women and even fewer women of color at the events. “If women aren’t showing up to where business deals are being made then it’s a problem,” she said. Kelly was determined to either find or create an “empowering opportunity” for women to benefit from workshops, luncheons, golf outings and other recreation events where partnerships develop and referrals are made. She said women are still at a disadvantage when they do not have a community of like-minded supporters to pitch their products, send referrals and provide top-notch services for each other. The common gender-slanted ex-

pression “I know a guy” may be fading away as Kelly is determined to see more women gaining confidence to show up and speak up in their community. Wealthy Women Dine offers “a safe space where women can connect and feel comfortable asking for help,” said Kelly, who began inviting women to lunch last May. The group averaged seven women per event but this year she is anticipating growth as word of the group spreads. For 2020, she is planning more targeted workshops to help women create a business plan, form or update strategic plans, find funding and more. “Too many women are trying to