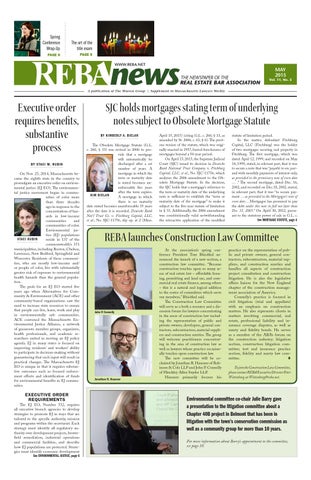 The art of the title exam

THE NEWSPAPER OF THE

A publication of The Warren Group | Supplement to Massachusetts Lawyers Weekly

On Nov. 25, 2014, Massachusetts became the eighth state in the country to promulgate an executive order on environmental justice (EJ EO). The environmental justice movement began in communities of color more than three decades ago in response to the concentration of hazards in low-income communities and communities of color. Environmental justice (EJ) populations STACI RUBIN reside in 137 of the commonwealth’s 351 municipalities, including Boston, Chelsea, Lawrence, New Bedford, Springfield and Worcester. Residents of these communities, who are mostly low-income and/ or people of color, live with substantially greater risk of exposure to environmental health hazards than the general population. The push for an EJ EO started five years ago when Alternatives for Community & Environment (ACE) and other community-based organizations saw the need to increase state resources to ensure that people can live, learn, work and play in environmentally safe communities. ACE convened the Massachusetts Environmental Justice Alliance, a network of grassroots member groups, organizers, health professionals, and academic researchers united in moving an EJ policy agenda. EJ in many states is focused on improving residents’ and workers’ ability to participate in decision-making without guaranteeing that such input will result in practical changes. The Massachusetts EJ EO is unique in that it requires substantive outcomes such as focused enforcement efforts and identification of funds for environmental benefits in EJ communities.

The EJ EO, Number 552, requires all executive branch agencies to develop strategies to promote EJ in ways that are tailored to the specific authority, mission and programs within the secretariat. Each strategy must identify all regulatory authority over development projects, brownfield remediation, industrial operations and commercial facilities, and describe how EJ populations are protected. Strategies must identify economic development See ENVIRONMENTAL JUSTICE, page 6

The Obsolete Mortgage Statute (G.L. c. 260, § 33) was revised in 2006 to provide that a mortgage will automatically be discharged after a set number of years. A mortgage in which the term or maturity date is stated becomes unenforceable five years after the term expires. KIM BIELAN A mortgage in which there is no maturity date stated becomes unenforceable 35 years after the date it is recorded. Deutsche Bank Nat’l Trust Co. v. Fitchburg Capital, LLC, et al., No. SJC-11756, slip op. at 2 (Mass.

April 15, 2015) (citing G.L. c. 260, § 33, as amended by St. 2006, c. 63, § 6). The previous version of the statute, which was originally enacted in 1957, barred foreclosures of mortgages beyond a 50-year period. On April 15, 2015, the Supreme Judicial Court (SJC) issued its decision in Deutsche Bank National Trust Company v. Fitchburg Capital, LLC, et al., No. SJC-11756, which analyzes the 2006 amendment to the Obsolete Mortgage Statute. In the decision, the SJC holds that a mortgage’s reference to the term or maturity date of the underlying note is sufficient to establish the “term or maturity date of the mortgage” to make it subject to the five-year statute of limitation in § 33. Additionally, the 2006 amendment was constitutionally valid notwithstanding the retroactive application of the modified

statute of limitation period. In the matter, defendant Fitchburg Capital, LLC (Fitchburg) was the holder of two mortgages securing real property in Fitchburg. The first mortgage, which was dated April 12, 1999, and recorded on May 14, 1999, stated, in relevant part, that it was to secure a note that was “payable in one yearand with monthly payments of interest only, as provided in the promissory note of even date … .” The second mortgage, dated Dec. 16, 2002, and recorded on Dec.18, 2002, stated, in relevant part, that it was “to secure payment … as provided in the Mortgagor’s note of even date… Mortgagor has promised to pay the debt under this note in full not later than Dec. 31, 2003.” On April 30, 2012, pursuant to the statutory power of sale in G.L. c. See MORTGAGE STATUTE, page 4

At the association’s spring conference President Tom Bhisitkul announced the launch of a new section, a construction law committee. “Because construction touches upon so many areas of real estate law – affordable housing, permitting and land use, and commercial real estate finance, among others – this is a natural and logical addition to the roster of committees which serve our members,” Bhisitkul said. The Construction Law Committee will serve as a both a resource and a discussion forum for lawyers concentrating in the areas of construction law including the representation of public and private owners, developers, general contractors, subcontractors, material suppliers and construction sureties. The group will welcome practitioners concentrating in the area of construction law as well as lawyers whose practice occasionally touches upon construction law. The new committee will be cochaired by Jonathan R. Hausner of Robinson & Cole LLP and John P. Connelly of Hinckley Allen Snyder LLP. Hausner primarily focuses his

practice on the representation of public and private owners, general contractors, subcontractors, material suppliers, and construction sureties and handles all aspects of construction project consultation and construction litigation. He is also the legislative affairs liaison for the New England chapter of the construction management association of America. Connelly’s practice is focused in civil litigation (trial and appellate) with an emphasis on construction matters. He also represents clients in matters involving commercial, real estate, professional liability and insurance coverage disputes, as well as surety and fidelity bonds. He serves as a member of the ABA’s forum on the construction industry; litigation section, construction litigation committee; tort and insurance practice section, fidelity and surety law committee. t To join the Construction Law Committee, please contact REBA Executive Director Peter Wittenborg at Wittenborg@reba.net.

Environmental committee co-chair Julie Barry gave a presentation to the litigation committee about a Chapter 40B project in Belmont that has been in litigation with the town’s conservation commission as well as a community group for more than 10 years. For more information about Barry’s appointment to the committee, see page 10.