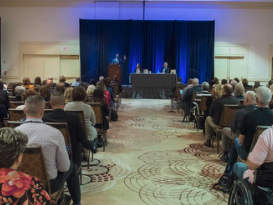 Behind the scenes of consumer ...
By Natalie Pressman | The Registrar

Driving change in an organization does not happen overnight, but can be achieved with hard work, passion, and determination. This is evident at CPA Atlantic, the school that trains incoming and existing Chartered Professional Accountants in Atlantic Canada and Bermuda.

Equity, Diversity, and Inclusion (EDI) have become fundamental pillars for the organization’s governance and operations to further build a profession and workplace that is more reflective of the greater population.

Equity, Diversity, and Inclusion (EDI) have become fundamental pillars for the organization’s governance and operations to further build a profession and workplace that is more reflective of the greater population.

Anne-Marie Gammon, the school’s CEO, is at the helm of the shift, along with Jennifer Gosse, chair of the school’s board of directors, and Andre Bellefeuille, vice president of marketing and business development.

While the trio admits the process has been one of endurance, often seeing only small steps forward, the deliberate work of improving EDI could have huge impacts on the industry.

“What we do now directly affects the future of our profession,” Gosse says of the school’s work. “We create a funnel that goes into our membership across Canada.”

Gosse recalls a conversation with another director on the board who spoke of being the only female in her university accounting class in the 1980s. Today, the entrance rate of women at the Atlantic School of Business is over 50 percent, proving that small steps can aggregate over time.

In formalizing its EDI strategy, the school is focused on education, outreach, and data collection. CPA Atlantic is looking at how its student body is represented in gender identification, visible minorities, persons with disabilities, and Indigenous representation.

If we’re going to grow and be relevant and be seen as contemporary and be an attractive profession, we have to do this work

This year, Bellefeuille explains, just under two percent of student applicants identified as Indigenous. Having the figure as a starting point, the leadership team can investigate the reason behind this and how to address obstacles that are preventing diverse communities from being interesting in or accessing the profession’s programs.

Connecting with leaders of Indigenous and African Nova Scotian communities has also become a key part of CPA Atlantic’s outreach strategy. Through this work, Gammon was able to take on the first CPA-approved employer in Canada in Membertou First Nation, in Cape Breton.

“If we’re going to grow and be relevant and be seen as contemporary and be an attractive profession, we have to do this work,” says Gammon.

In October 2021, all staff, members of the Board, and faculty will commence an almost year-long training program in EDI. To be facilitated by Camille Dundas, an internationally acclaimed EDI consultant who specializes in allyship and anti-racism education, participants will gain a deeper understanding of principles of EDI, its application in the workplace, and issues such as unconscious bias.

Bellefeuille echoes that “It’s not just about a moral compass, there’s an economic, tangible material measurable benefit from the diversity.”

Gosse points to numerous studies demonstrating that when diversity is present, companies thrive in many more ways than profit. “It’s better to have different perspectives when tackling obstacles and challenges,” she says.

In prioritizing DEI, the CPA Atlantic School of Business has also created a culture where faculty are encouraged to come forward with their ideas for improvements. While the school is continuing to find ways to move the needle forward, ensuring the conversation doesn’t stop is top of mind.

“Just keep talking about it because there’s always something else to improve upon,” Gosse says. “If you stop the conversation, you’re going to stop your progress. We need to keep the conversation moving.”