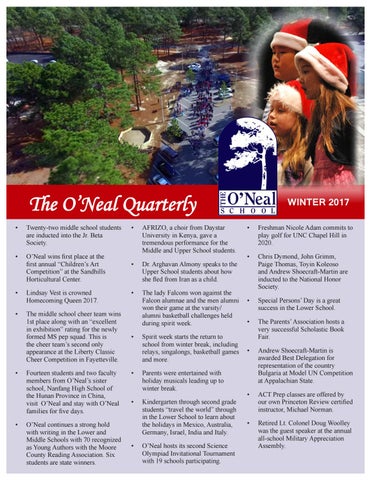 The middle school cheer team wins 1st place along with an “excellent in exhibition” rating for the newly formed MS pep squad. This is the cheer team’s second only appearance at the Liberty Classic Cheer Competition in Fayetteville.

Fourteen students and two faculty members from O’Neal’s sister school, Nanfang High School of the Hunan Province in China, visit O’Neal and stay with O’Neal families for five days. O’Neal continues a strong hold with writing in the Lower and Middle Schools with 70 recognized as Young Authors with the Moore County Reading Association. Six students are state winners.

AFRIZO, a choir from Daystar University in Kenya, gave a tremendous performance for the Middle and Upper School students.

Dr. Arghavan Almony speaks to the Upper School students about how she fled from Iran as a child.

The lady Falcons won against the Falcon alumnae and the men alumni won their game at the varsity/ alumni basketball challenges held during spirit week.

Parents were entertained with holiday musicals leading up to winter break.

Kindergarten through second grade students “travel the world” through in the Lower School to learn about the holidays in Mexico, Australia, Germany, Israel, India and Italy.

Special Persons’ Day is a great success in the Lower School.

Andrew Shoecraft-Martin is awarded Best Delegation for representation of the country Bulgaria at Model UN Competition at Appalachian State.

Matthew is currently the director of student life at Berkeley Preparatory School in Tampa, FL. He is a graduate of Washington and Lee University and received a Master of Arts degree in history from the University of New Hampshire. Currently he is in the process of earning his Master of Science in education from the University of New England. Matthew began his teaching career as an intern at Woodberry Forest School and then served as teacher and department head at Bishop Guertin High School before Berkeley Prep. He, his wife Bethany and their two children are excited to join the O’Neal community in July.

017 has already been a great year at O’Neal. Homecoming, the fifth grade musical, a Middle School art award, and all-conference athletic performances all highlight the accomplishments of our students. We continue to welcome new and visiting families to our campus, and look forward to the arrival of our new Head of Upper School, Matthew Jacobs. O’Neal’s comprehensive college counseling program allows Ms. Ferrerio to work with all students in grades 8-12, and we are proud of the Class of 2017 and their college acceptances and scholarship awards. Many have been admitted to some of the most selective programs in the nation, which is a testament to their successes. The primary goal of our program remains to find the best college match to meet the needs and aspirations of each individual student and family. The Annual Auction is a highlight of the early spring. Most of our teachers have had the opportunity to engage in professional development thanks to the generous donations of supporters at last year’s Auction Fund a Need. Workshops, classes and visiting peer schools are just some of the ways the faculty has worked to improve teaching and learning at O’Neal.

’Neal is pleased to announce Matthew Jacobs as head of Upper School beginning school year 2017-2018. The position is currently held by Will Rhem, who announced early in the school year his desire to seek international opportunities.

“I’m looking forward to having Matt onboard,” says Head of School John Elmore. “His track record in making the school environment a fulfilling, memorable experience for students coupled with his focus on curriculum and love of teaching makes him a great fit for our Upper School.”

Meet our Annual Auction Honorary Chairs speechless. What I give, I do from my heart, for the kids and the School. There’s a lot more people who do more than I do.”

’Neal is pleased to announce Pete and Alkaterini Kakouras as Honorary Auction Chairs for this year’s Annual Auction. Their son, Andreas is in O’Neal’s seventh grade.

Theatrical performances, spring athletics and Field Day will soon be here. At these events, and throughout each day at O’Neal, seeing the inquisitive, excited faces of our students exemplifies the energetic, happy environment we have for “We thank the School for the privilege of being Honorary Auction Chairs,” says Pete. learning. “I didn’t expect such an honor and I’m

Pete has been a strong steward of O’Neal as he has provided food for the School’s Field Day, the Booster Club Homecoming dinners, the Science Olympiad Invitational tournament, the Women in Sports luncheon and more. He is a donor to the “Please Be Seated” campaign where a bench is named for his family in the Landmark Garden. He is also a repeat business sponsor for the Annual Auction. “I am happy to have the opportunity to be asked to be a part of this family and help the School,” says Pete. “It’s a unique feeling. I’ve been around the world a few times and Moore County itself has embraced me.” Pete helps to support the schools in North Moore County and he is also the #1 sponsor for Farmers Day in Robbins.

’Neal and swimming have had a strong relationship since the early 1970’s when Taws Hall was built – including the pool and Tate Gym. What great fun it is to have swimming as a part of your physical education! The offering of swimming as a PE class is still a great attraction for families of young children who look to enroll and is a strong contributor to the uniqueness of O’Neal.

Swimming as an O’Neal sport also has a notable history. Doak Finch ’96 was a 4-year high school All American, which is determined by being among the top 50 high school swimmers in the nation. “We never won a state championship, but we were always runner-up,” says Doak. “Back then, there were no divisions defined by school size, so we competed against larger schools like Charlotte Latin and Ravenscroft.” Currently Doak is an assistant swimming coach at Duke University previously holding coaching positions at Penn State and Doak Finch ‘96 placed seventh in the UVA. He is one of the many Falcons 2000 U.S. Olympic Trials in the 200 who have been able to competitivebutterfly where the top two who ly swim in college and beyond. qualified for the Olympics team were current (at the time) record holder Of record, since O’Neal became for the 200 fly, Tom Malchow and the a division 2A school in 2002, the present 200 fly record holder, Michael boys’ and girls’ teams have each won Phelps. the state championship at least three times. Within the past ten years, each of the teams have won their conference championships more times than not. O’Neal currently holds half the state relay records. O’Neal swimmer and High School All American Greg Doughty ‘07 broke the 100 Free record in 2007; it is the longest standing boys record on the books.

On Friday, February 3rd, O’Neal fifth grade performed their second annual musical: Yaddraw Kcabeht: A Day of Strange Happenings, by David and Heather Lussier. Allie is a kid who loves to do things her own way. Some people in her life love this about her, others find it a bit annoying. One day Allie is transported to a world where everything is done the way she likes it: tilted upside down and backwards. Allie loves this at first, however she finds out it can get to be too much. Back in the real world, Allie learns you can still be an original but don’t let it mess up someone else’ day.

Getting In at the Right Price: How to Maximize Your College Admission Prospects and Save Big Money in the Process

O ’ NEAL SUMMER FUN Summer enrichment programs for youth age 3 through high school. Camps are priced at a $10 discount through May 31st. 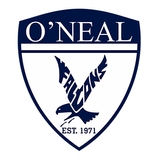 The quarterly newsletter of The O'Neal School

The quarterly newsletter of The O'Neal School