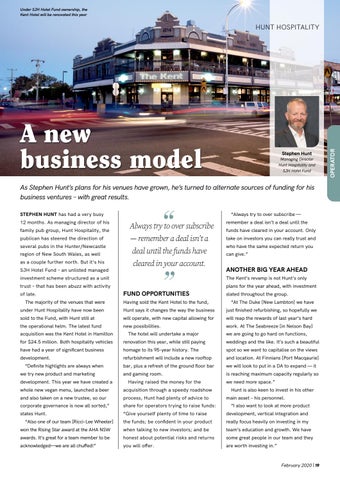 Under SJH Hotel Fund ownership, the Kent Hotel will be renovated this year

As Stephen Hunt’s plans for his venues have grown, he’s turned to alternate sources of funding for his business ventures – with great results. STEPHEN HUNT has had a very busy 12 months. As managing director of his family pub group, Hunt Hospitality, the publican has steered the direction of several pubs in the Hunter/Newcastle region of New South Wales, as well as a couple further north. But it’s his SJH Hotel Fund – an unlisted managed

remember a deal isn’t a deal until the

— remember a deal isn’t a

take on investors you can really trust and

deal until the funds have cleared in your account.

investment scheme structured as a unit trust – that has been abuzz with activity of late. The majority of the venues that were

funds have cleared in your account. Only who have the same expected return you can give.”

FUND OPPORTUNITIES Having sold the Kent Hotel to the fund,

plans for the year ahead, with investment slated throughout the group. “At The Duke [New Lambton] we have

under Hunt Hospitality have now been

Hunt says it changes the way the business

just finished refurbishing, so hopefully we

sold to the Fund, with Hunt still at

will operate, with new capital allowing for

will reap the rewards of last year’s hard

the operational helm. The latest fund

work. At The Seabreeze [in Nelson Bay]

acquisition was the Kent Hotel in Hamilton

The hotel will undertake a major

for $24.5 million. Both hospitality vehicles

renovation this year, while still paying

have had a year of significant business

homage to its 95-year history. The

spot so we want to capitalise on the views

refurbishment will include a new rooftop

and location. At Finnians [Port Macqaurie]

bar, plus a refresh of the ground floor bar

we will look to put in a DA to expand — it

is reaching maximum capacity regularly so

“Definite highlights are always when we try new product and marketing development. This year we have created a

Having raised the money for the

we are going to go hard on functions,

acquisition through a speedy roadshow

and also taken on a new trustee, so our

process, Hunt had plenty of advice to

corporate governance is now all sorted,”

“Give yourself plenty of time to raise

the funds; be confident in your product

really focus heavily on investing in my

won the Rising Star award at the AHA NSW

when talking to new investors; and be

team’s education and growth. We have

awards. It’s great for a team member to be

honest about potential risks and returns

some great people in our team and they

are worth investing in.”

“Also one of our team [Ricci-Lee Wheeler]

Hunt is also keen to invest in his other main asset – his personnel. “I also want to look at more product