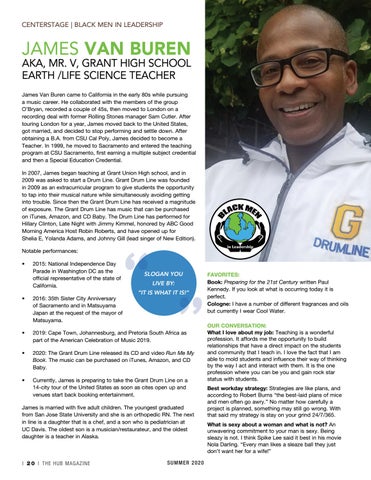 AKA, MR. V, GRANT HIGH SCHOOL EARTH /LIFE SCIENCE TEACHER James Van Buren came to California in the early 80s while pursuing a music career. He collaborated with the members of the group O’Bryan, recorded a couple of 45s, then moved to London on a recording deal with former Rolling Stones manager Sam Cutler. After touring London for a year, James moved back to the United States, got married, and decided to stop performing and settle down. After obtaining a B.A. from CSU Cal Poly, James decided to become a Teacher. In 1999, he moved to Sacramento and entered the teaching program at CSU Sacramento, first earning a multiple subject credential and then a Special Education Credential. In 2007, James began teaching at Grant Union High school, and in 2009 was asked to start a Drum Line. Grant Drum Line was founded in 2009 as an extracurricular program to give students the opportunity to tap into their musical nature while simultaneously avoiding getting into trouble. Since then the Grant Drum Line has received a magnitude of exposure. The Grant Drum Line has music that can be purchased on iTunes, Amazon, and CD Baby. The Drum Line has performed for Hillary Clinton, Late Night with Jimmy Kimmel, honored by ABC Good Morning America Host Robin Roberts, and have opened up for Shelia E, Yolanda Adams, and Johnny Gill (lead singer of New Edition). Notable performances: •

2015: National Independence Day Parade in Washington DC as the official representative of the state of California.

2016: 35th Sister City Anniversary of Sacramento and in Matsuyama Japan at the request of the mayor of Matsuyama.

2019: Cape Town, Johannesburg, and Pretoria South Africa as part of the American Celebration of Music 2019.

2020: The Grant Drum Line released its CD and video Run Me My Book. The music can be purchased on iTunes, Amazon, and CD Baby.

Currently, James is preparing to take the Grant Drum Line on a 14-city tour of the United States as soon as cites open up and venues start back booking entertainment.

James is married with five adult children. The youngest graduated from San Jose State University and she is an orthopedic RN. The next in line is a daughter that is a chef, and a son who is pediatrician at UC Davis. The oldest son is a musician/restaurateur, and the oldest daughter is a teacher in Alaska.

FAVORITES: Book: Preparing for the 21st Century written Paul Kennedy. If you look at what is occurring today it is perfect. Cologne: I have a number of different fragrances and oils but currently I wear Cool Water. OUR CONVERSATION: What I love about my job: Teaching is a wonderful profession. It affords me the opportunity to build relationships that have a direct impact on the students and community that I teach in. I love the fact that I am able to mold students and influence their way of thinking by the way I act and interact with them. It is the one profession where you can be you and gain rock star status with students. Best workday strategy: Strategies are like plans, and according to Robert Burns “the best-laid plans of mice and men often go awry.” No matter how carefully a project is planned, something may still go wrong. With that said my strategy is stay on your grind 24/7/365. What is sexy about a woman and what is not? An unwavering commitment to your man is sexy. Being sleazy is not. I think Spike Lee said it best in his movie Nola Darling. “Every man likes a sleaze ball they just don’t want her for a wife!”

Summer 2020 Celebrating Black Men in Leadership special edition issue of THE HUB Magazine. Navigating Black California just got better with THE HUB Magazine quarterly publication. In every issue of THE HUB: The Urban Entertainment & Lifestyle Magazine there are feature articles on major event reviews, career profiles and business services throughout California. This magazine celebrates the achievements of African Americans while informing and uplifting Black families to succeed in life. Every special edition issue is worth archiving. 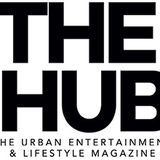