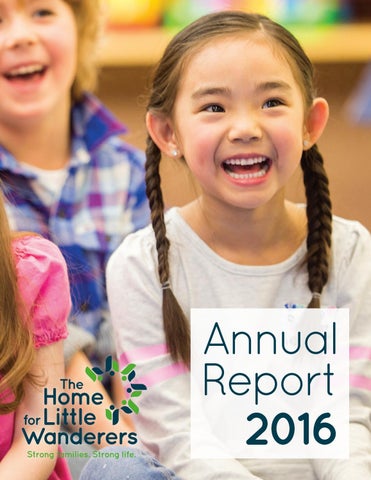 The Home never gives up on children. And we donâ&#x20AC;&#x2122;t let children give up on themselves.

A Letter From Our Leadership Dear Friends, The Home thrived during Fiscal Year 2016, positively impacting more than 7,000 lives. It can be heartbreaking to think of how many children and families need our services and of the paths which brought them to The Home. The opioid epidemic and other societal factors have drastically increased the number of children in the care of the Massachusetts Department of Children and Families. While children are living with state-contracted providers like The Home, we are responsible for building their physical, social, emotional, and behavioral health through evidence-based practices while making them feel safe and loved. As the need for our residential services grew so did our two special education schools. We are thrilled to see the schools being better utilized. We know children who struggle with emotional, behavioral, and special education needs will flourish under our curriculum but it has been a long road to convince local school districts of that. We strive to be innovative in our work and create programs for children no one else serves. In FY16, we opened the Duggan House, an independent living program on our Longview Farm Campus. We identified a trend of many young adults aging out of our Longview Farm program while still attending high school. Even though they may not have been eligible for services because of their age, we knew they still needed clinical, social, and housing supports. Duggan House allows them to be close to their clinicians and Longview Farm staff while acquiring the skills necessary to live independently. In the wake of national discourse regarding race, The Home launched its Young Men of Color Initiative to give this population both the space and time to talk about the unique challenges they face and how they can positively overcome them. The initiative began with a conference and continued throughout the year with community-wide barbeques, breakout sessions, and program-based discussions. Our growth and continued delivery of quality services would not be possible without our generous support system including our Board of Directors, Board of Ambassadors, donors, friends, volunteers, and staff. Thank you for your continued belief in our mission and your gifts which enable the vulnerable children and families of Massachusetts to be supported and given the opportunity to succeed in all aspects of their lives. Thank you,

hildren who have consistent connections with an adult and with their community are more successful in their treatment and have a more positive outlook. Always working to better the lives of the children we serve, The Home decided to revamp its volunteer program in Fiscal Year 2016 to create more opportunities for our kids to succeed. Volunteering is split into two programs — Program Volunteer Mentoring and Corporate Volunteers — the former being led by Taryn Marino. Taryn has grown our volunteer presence in The Home’s 20+ programs to over 100 people who donate more than 400 hours each month! Many volunteers are mentors; they are matched with an individual child based on mutual interests and are asked to commit to at least one year of service and spend at least two hours a week with our kids. Mentors bond with youth and do everything from taking them to sports practice to Six Flags field trips. For many youth, their mentor is the only consistent one-on-one relationship they’ve had in their entire life. Individual mentoring is an important piece of The Home’s new Permanency Initiative which strives to have every child leave our care with at least one lifelong connection. Thanks to Taryn and the revamped program, mentors are helping trauma-affected kids form positive connections.

welve year-old Caleb* has gone through a difficult couple of years while living with The Home. He was hospitalized, his father was incarcerated and recently, he switched group homes. There was one person with him through it all, his mentor Ade. Ade, a 25 year-old pursing his Doctorate in Chemical Engineering, knows the impact one caring adult can make in a child’s life. Growing up in the small country of Botswana, Ade has a deep sense of community which compelled him to volunteer with The Home. Ade makes sure Caleb gets time to be a kid when they spend time together with trips to the Museum of Science, movies, and the park. But he also helps Caleb focus on therapeutic goals as the young boy works through

his traumatic past. Just showing up every week and maintaining a consistent relationship has helped Caleb rebuild trust with adults; something he struggled with previously. Caleb has made tremendous progress while at The Home and matched with Ade. He is now going on weekend visits with his biological family. Ade is looking forward to continuing mentoring Caleb and helping him through whatever transition happens next, “It is not just a task. It can lead to a lifetime of commitment. I think about how I will be helping Caleb ten years down the road.” *Names and identifying information have been changed to  protect our clients

he Home’s rebirth of volunteering created a new way to engage corporate partners while maximizing the benefit to our kids and programs. Over Fiscal Year 2016, Chelsea Gordon, Volunteer Manager, worked to strengthen relationships with corporate and community partners to ensure our programs were getting their needs fulfilled and supporters were achieving their Corporate Social Responsibility (CSR) goals. Her hard work resulted in one of our best years yet!

Impacts on Kids and Families

ur Volunteer Program focuses on maximizing volunteersâ&#x20AC;&#x2122; positive impact on our programs where children live, play, and grow. Our corporate partnerships provided Duck Tours, Field Days, Wellness Days, Family Dinner and Game Nights, and holiday meals that enabled our children to forget their worries and just have fun. Other volunteer days involved planting of trees at Longview Farm, a makeover of common spaces at Roxbury House, building a patio at Roxbury Village, and landscaping at Southeast Campus. These projects helped children who are at our residential programs feel more at home. Corporate volunteers help us provide improvements and additional fun opportunities to kids and families who are facing some of the toughest times in their lives.

fter closing our iconic Knight’s Children Center in Jamaica Plain to move children out to a much more updated facility in Walpole, The Home’s Big Wishes Toy Room spent three years wandering throughout Greater Boston. In 2015, we found a permanent home within The Thrift Shop of Boston’s new location on Corinth Street, a part of Roslindale Village. The Home is thrilled to have the Toy Room back in Boston where most of the children and families we serve live. The Roslindale Village community was very welcoming and generous. “I was extremely impressed by the community’s generosity from people of all means and socioeconomic status,” said Chelsea Gordon, Volunteer Manager and Toy Room coordinator.

93% of families’ wishes were pledged

Finding Help in a New City

aughing and squealing could be heard throughout the halls of the Preschool Outreach Program (POP) as Aniyah, 5 and Angelique, 2, played in the Sensory Motor Arousal Regulation Treatment (SMART) room. Their attitudes were very different than months ago when their mother, Elbia, loaded them on the unfamiliar MBTA bus to take them to The Home’s Boston-Suffolk County Family Resource Center to get help with housing. Due to unforseen circumstances, Elbia and her husband found themselves homeless with their five children and grandbaby. The only shelter that could take the family of eight was in Boston, a city they are not from. Elbia didn’t know where to turn for help in this new town; her neighbor suggested she go to the Boston-Suffolk County Family Resource Center (FRC). Amy McCarthy, Program Director of the FRC, and her staff thought Elbia and her children could benefit from additional supports. Homelessness is a toxic stressor that can be emotionally, mentally, and behaviorally taxing. Their first referral was to POP to help Aniyah with her nightmares and Angelique with her stranger anxiety. The next two older children and mom began seeing a mental

health clinician at the Children and Family Counseling Clinic (CFCC). Conveniently, all of these programs are under one roof at The Home’s Roslindale location. There was no doubt Elbia was impressed with the services her family were receiving, “It’s a great place for community information. And I can always pick up the phone and ask for more information and help for my kids.” Over the past year, the family has attended countless FRC events like Family Art Circles, a father’s day cookout, Little Yogis, and more. Mom has attended two 12-week parenting trainings and job readiness seminars. The two middle daughters attended therapeutic summer camp at CFCC. Aniyah’s nightmares have almost gone away and Angelique happily hugs the FRC staff. Most importantly, with the help of the FRC the family has found permanent housing. Amy’s staff will continue to support the family through this journey by finding them furniture and linens for their new home. “The FRC is always working to keep families strong and together,” said Elbia.

The FRC served 350 families in its first year and participated in close to 200 outreach events in FY16.

For internal management and budgeting purposes, The Home uses the Operating Surplus/(Deficit) line.

We gratefully recognize all our donors who gave in Fiscal Year 2016. Thank you for your generosity to the children and families in our care.

Leadership Circle of Hope The Leadership Circle of Hope is The Home’s recognition society for donors contributing $1,000 or more within a given fiscal year. The following list reflects all gifts and pledges received between July 1, 2015 and June 30, 2016. VISIONARY COUNCIL ($200,000 to $500,000) Natixis Global Asset Management Estate of Ruth E. Parent Trust of Edna Betts Talbot The TJX Companies United Way of Massachusetts Bay & Merrimack Valley

Think Differently. Give Differently. Many of our generous donors have devised quite creative ways of ensuring that The Home is remembered — both now and in the future. Some examples are:   •  Naming The Home a beneficiary in their will   •  Earmarking their Social Security check to come to The Home on a monthly basis   •  Making The Home the beneficiary of their insurance policy   •  Establishing a charitable gift annuity   •  Bequeathing the balance in their savings account to The Home   •  Transferring of stock and appreciated assets

Join Our Circle of Friends Show your commitment to our communities’ most vulnerable children by making a sustaining gift — an automatic recurring donation that is both easy to set up and maintain. Your sustaining donations remind children, who many otherwise feel alone, that someone is thinking of them. A heartfelt thank you to our friends and supporters for helping us make a difference in the lives of children and families who need it the most.

The Legacy Circle honors those friends who have included The Home in their estate plans or have established a planned gift. This perpetual link between the donor and The Home is a testament to the donor’s passion to better the lives of vulnerable children and families.

22 young adults at YARN and Roxbury Village secured a job during calendar year 2015.

THANK YOU for helping us to make a difference in the lives of children and families. 27 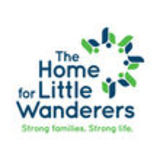 The Home for Little Wanderers