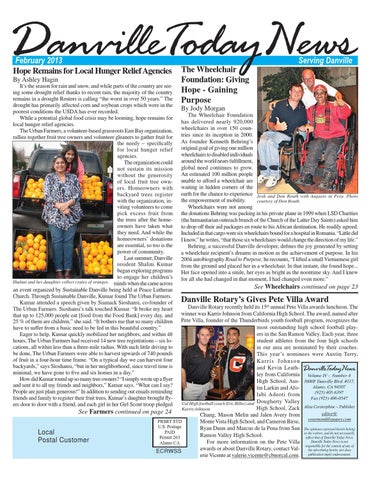 February 2013 Hope Remains for Local Hunger Relief Agencies By Ashley Hagin It’s the season for rain and snow, and while parts of the country are seeing some drought relief thanks to recent rain, the majority of the country remains in a drought Reuters is calling “the worst in over 50 years.” The drought has primarily affected corn and soybean crops which were in the poorest conditions the USDA has ever recorded. While a potential global food crisis may be looming, hope remains for local hunger relief agencies. The Urban Farmers, a volunteer-based grassroots East Bay organization, rallies together fruit tree owners and volunteer gleaners to gather fruit for the needy – specifically for local hunger relief agencies. The organization could not sustain its mission without the generosity of local fruit tree owners. Homeowners with backyard trees register with the organization, inviting volunteers to come pick excess fruit from the trees after the homeowners have taken what they need. And while the homeowners’ donations are essential, so too is the power of community. Last summer, Danville resident Shalini Kumar began exploring programs to engage her children’s Shalani and her daughter collect crates of oranges. minds when she came across an event organized by Sustainable Danville being held at Peace Lutheran Church. Through Sustainable Danville, Kumar found The Urban Farmers. Kumar attended a speech given by Siamack Sioshansi, co-founder of The Urban Farmers. Sioshansi’s talk touched Kumar. “It broke my heart that up to 125,000 people eat [food from the Food Bank] every day, and 25 % of them are children,” she said. “It bothers me that so many children have to suffer from a basic need to be fed in this beautiful country.” Eager to help, Kumar quickly mobilized her neighbors, and within 48 hours, The Urban Farmers had received 14 new tree registrations – six locations, all within less than a three-mile radius. With such little driving to be done, The Urban Farmers were able to harvest upwards of 740 pounds of fruit in a four-hour time frame. “On a typical day we can harvest four backyards,” says Sioshansi, “but in her neighborhood, since travel time is minimal, we have gone to five and six homes in a day.” How did Kumar round up so many tree owners? “I simply wrote up a flyer and sent it to all my friends and neighbors,” Kumar says. “What can I say? People are just plain generous!” In addition to sending out emails reminding friends and family to register their fruit trees, Kumar’s daughter brought flyers door to door with a friend, and each girl in her Girl Scout troop pledged

Serving Danville The Wheelchair Foundation: Giving Hope - Gaining Purpose By Jody Morgan The Wheelchair Foundation has delivered nearly 920,000 wheelchairs in over 150 countries since its inception in 2000. As founder Kenneth Behring’s original goal of giving one million wheelchairs to disabled individuals around the world nears fulfillment, global need continues to grow. An estimated 100 million people unable to afford a wheelchair are waiting in hidden corners of the earth for the chance to experience Josh and Don Routh with Augusto in Peru. Photo the empowerment of mobility. courtesy of Don Routh. Wheelchairs were not among the donations Behring was packing in his private plane in 1999 when LSD Charities (the humanitarian outreach branch of the Church of the Latter Day Saints) asked him to drop off their aid packages en route to his African destination. He readily agreed. Included in that cargo were six wheelchairs bound for a hospital in Romania. “Little did I know,” he writes, “that those six wheelchairs would change the direction of my life.” Behring, a successful Danville developer, defines the joy generated by setting a wheelchair recipient’s dreams in motion as the achievement of purpose. In his 2004 autobiography Road to Purpose, he recounts, “I lifted a small Vietnamese girl from the ground and placed her in a wheelchair. In that instant, she found hope... Her face opened into a smile, her eyes as bright as the noontime sky. And I knew for all she had changed in that moment, I had changed even more.” 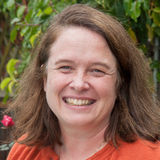