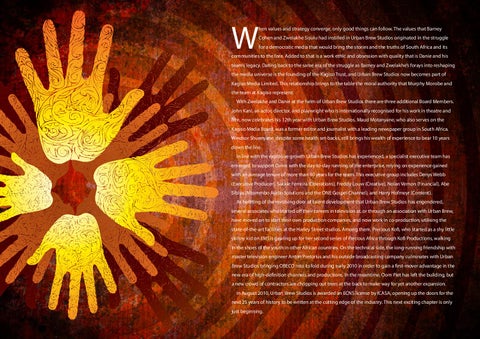 hen values and strategy converge, only good things can follow. The values that Barney Cohen and Zwelakhe Sisulu had instilled in Urban Brew Studios originated in the struggle for a democratic media that would bring the stories and the truths of South Africa and its

communities to the fore. Added to that is a work ethic and obsession with quality that is Danie and his teamâ&#x20AC;&#x2122;s legacy. Dating back to the same era of the struggle as Barney and Zwelakheâ&#x20AC;&#x2122;s forays into reshaping the media universe is the founding of the Kagiso Trust, and Urban Brew Studios now becomes part of Kagiso Media Limited. This relationship brings to the table the moral authority that Murphy Morobe and the team at Kagiso represent. With Zwelakhe and Danie at the helm of Urban Brew Studios there are three additional Board Members. John Kani, an actor, director, and playwright who is internationally recognised for his work in theatre and film, now celebrates his 12th year with Urban Brew Studios. Maud Motanyane, who also serves on the Kagiso Media Board, was a former editor and journalist with a leading newspaper group in South Africa. Windsor Shuenyane, despite some health set-backs, still brings his wealth of experience to bear 10 years down the line. In line with the explosive growth Urban Brew Studios has experienced, a specialist executive team has emerged to support Danie with the day-to-day running of the enterprise, relying on experience gained with an average tenure of more than 10 years for the team. This executive group includes Denys Webb (Executive Producer), Sakkie Ferreira (Operations), Freddy Louw (Creative), Nolan Vernon (Financial), Abe Sibiya (Mtommbo Audio Solutions and the ONE Gospel Channel), and Harry Hofmeyr (Content). As befitting of the revolving door of talent development that Urban Brew Studios has engendered, several associates who started off their careers in television at, or through an association with Urban Brew, have moved on to start their own production companies, and now work in co-production, utilising the state-of-the-art facilities at the Harley Street studios. Among them, Precious Kofi, who started as a shy little skinny kid on EMS is gearing up for her second series of Precious Africa through Kofi Productions, walking in the shoes of the youth in other African countries. On the technical side, the long-running friendship with master television engineer Anton Pretorius and his outside broadcasting company culminates with Urban Brew Studios bringing OBECO into its fold during early 2010 in order to gain a first-mover advantage in the new era of high-definition channels and productions. In the meantime, Oom Piet has left the building, but a new crowd of contractors are chopping out trees at the back to make way for yet another expansion. In August 2010, Urban Brew Studios is awarded an ECNS license by ICASA, opening up the doors for the next 25 years of history to be written at the cutting edge of the industry. This next exciting chapter is only just beginning. 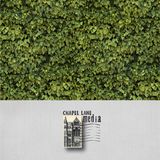 Another fine publication by Chapel Lane Media which demonstrates their depth of research, excellent time management, zero error policy, and...

Another fine publication by Chapel Lane Media which demonstrates their depth of research, excellent time management, zero error policy, and...