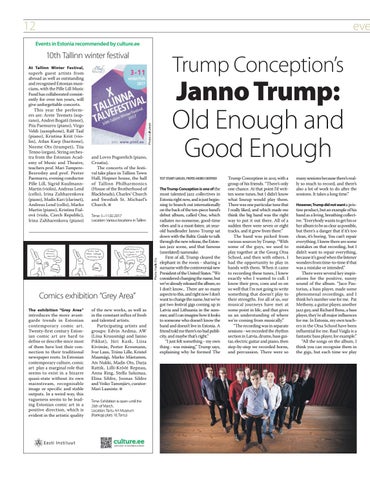 12 Events in Estonia recommended by culture.ee

and Lovro Pogorelich (piano, Croatia). The concerts of the festival take place in Tallinn Town Hall, Hopner house, the hall of Tallinn Philharmonics (House of the Brotherhood of Blackheads), Charles’ Church and Swedish St. Michael’s Church. ■

The Trump Conception is one of the

introduces the more avantgarde trends in Estonian contemporary comic art. Twenty-first century Estonian comic art are hard to define or describe since most of them have lost their connection to their traditional newspaper roots. In Estonian contemporary culture, comic art play a marginal role that seems to exist in a bizarre quasi-state without its own mainstream, recognisable image or specific and stable outputs. In a weird way, this vagueness seems to be leading Estonian comic art in a positive direction, which is evident in the artistic quality

most talented jazz collectives in Estonia right now, and is just beginning to branch out internationally on the back of the ten-piece band’s debut album, called One, which radiates no-nonsense, good-time vibes and is a must-listen. 26 yearold bandleader Janno Trump sat down with the Baltic Guide to talk through the new release, the Estonian jazz scene, and that famous (unrelated) namesake. First of all, Trump cleared the elephant in the room - sharing a surname with the controversial new President of the United States. “We considered changing the name, but we’ve already released the album, so I don’t know... There are so many aspects to this, and right now I don’t want to change the name, but we’ve got two festival gigs coming up in Latvia and Lithuania in the summer, and I can imagine how it looks to someone who doesn’t know the band and doesn’t live in Estonia. A friend told me there’s no bad publicity, and maybe that’s right.” “I just felt something - my own thing - was missing,” Trump says, explaining why he formed The

Trump Conception in 2015 with a group of his friends. “There’s only one chance. At that point I’d written some tunes, but I didn’t know what lineup would play them. There was one particular tune that I really liked, and which made me think the big band was the right way to put it out there. All of a sudden there were seven or eight tracks, and it grew from there.” The band was picked from various sources by Trump. “With some of the guys, we used to play together at the Georg Otsa School, and then with others, I had the opportunity to play in bands with them. When it came to recording these tunes, I knew exactly who I wanted to call. I know their pros, cons and so on so well that I’m not going to write something that doesn’t play to their strengths. For all of us, our musical journeys have met at some point in life, and that gives us an understanding of where we’re coming from musically.” “The recording was in separate sessions - we recorded the rhythm section in Latvia, drums, bass guitar, electric guitar and piano, then step-by-step we recorded horns, and percussion. There were so

many sessions because there’s really so much to record, and there’s also a lot of work to do after the sessions. It takes a long time.” However, Trump did not want a pris-

tine product, but an example of his band as a living, breathing collective. “Everybody wants to get his or her album to be as clear as possible, but there’s a danger that if it’s too clean, it’s boring. You can’t repair everything. I know there are some mistakes on that recording, but I didn’t want to repair everything, because it’s good when the listener wonders from time-to-time if that was a mistake or intended.” There were several key inspirations for the positive, sunny sound of the album. “Jaco Pastorius, a bass player, made some phenomenal recordings, and I think he’s number one for me. Pat Metheny, a guitar player, another jazz guy, and Richard Bona, a bass player, they’re all major influences for me. In Estonia, my own teachers in the Otsa School have been influential for me. Raul Vaigla is a fantastic bass player, for example.” “All the songs on the album, I think you can recognise them in the gigs, but each time we play

The Baltic Guide in English is a tourist newspaper for visitors to Estonia. 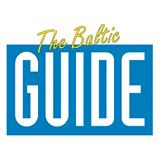