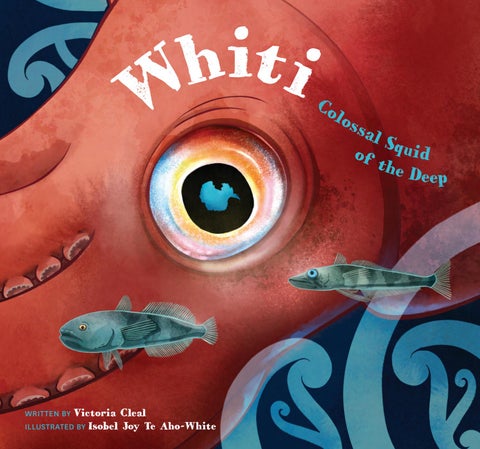 Journey to the icy waters of the Ross Sea in Antarctica and descend into Whitiâ&#x20AC;&#x2122;s dark underwater world. Learn more about colossal squid and the plants and animals that live beneath the ice, and follow Whiti as she grows from newborn squid to massive queen of the depths.

Whiti Colossal Squid of the Deep

The colossal squid has been the most popular exhibit at Te Papa since she arrived there in 2007. Now this appealing book for young readers tells the fascinating story of Whiti, one of these great creatures from the deep.

Antarctica – brrr! Looking for a colossal squid? You’ve come to the right place — Antarctica. You’ve travelled a long way south from Aotearoa New Zealand to here, the Ross Sea. It’s about six hours in a plane across the stormy Southern Ocean. Are you wearing lots of warm layers? Antarctica’s the coldest, windiest continent on the planet. It’s summer now, but it’s just minus 2 degrees Celsius – colder than your fridge. In winter the temperature plummets to minus 40 degrees Celsius. That’s about twice as cold as your freezer. Almost everywhere you look, there’s ice. Thin ice covers some of the Ross Sea, too. Only a small part of the land is bare of ice, and that’s where Adelie penguins make their nests. Few animals can survive in this harsh world, and those that do are built tough. As well as penguins, there are seals and seabirds, and even bugs like little springtails. Some plants live here, too – mosses, lichens and tiny algae. CRAAACK! Now the sun’s heat is breaking up the sea ice. It’s time to explore underwater. Will it be as bare as above the ice? Will we spot a colossal squid? keep snug with tightly packed feathers. They stay dry by spreading waterproof oil over their feathers. On land, they waddle or sledge on their bellies over the ice.

[gatefold - folds back onto following spread]

are on the lookout to grab a penguin egg or chick. These incredible travellers fly to the moana (ocean) between Russia and Alaska, then back again – a journey of 34,000 kilometres every year.

Ready, steady, grow The Ross Sea is fizzing with life, but summer is short. Animals here have to eat lots and grow quickly — winter will soon be back. live here all year. This mum and her pup are sunbathing by a breathing hole. Seals dive for kai (food), but they need to come up for air. Dad guards the hole. Other males don’t dare to poke their snouts up here!

are pure white. This camouflages them against the ice, making it easier for them to hunt for ika (fish), ngū (squid) and krill. They nest further south than any bird on Earth.

The chilly waters of the Southern Ocean flow to other moana, too. They carry oxygen and nutrients that ika and other animals need to thrive. The seafood we enjoy in Aotearoa New Zealand depends on these waters – thanks, Antarctica! Storms from the Southern Ocean reach us, too, keeping Papatūānuku, the Earth Mother, moist and cool.

See how the ice is a greenish colour underneath? It’s covered in tiny plants called algae – they’re the start of this explosion of life. Algae need light to grow, and right now they’re getting it 24 hours a day. In summer, the sun doesn’t set in Antarctica. Millions of shrimp-like krill gobble up the algae. Ika, penguins and many other animals gorge on the krill. Then those animals become kai for seals. The mauri (life force) is strong here in the sunlight zone (0 to 200 metres deep). The temperature of the wai (water) is minus 1.8 degrees Celsius all year, and only its saltiness stops it from freezing. But these animals can cope with cold. Plankton (tiny plants and animals) float in the moana. Sometimes, blooms of plant plankton grow so huge that they can be seen from space. There are even tiny colossal squid here – can you spot them?

are fierce predators. Some swim as far as Aotearoa.

arenâ&#x20AC;&#x2122;t really spiders, but the ones in the Ross Sea do have eight legs. They can grow as big as a dinner plate, but their bodies are tiny. They have straw-like mouths to suck up the soft bits of animals.

hide by putting bits of seaweed on their tube feet. This type of seaweed tastes gross to sea stars, so they donâ&#x20AC;&#x2122;t eat kina that are covered in it.

Who needs a backbone? The sea floor under the ice swarms with colourful invertebrates – animals that don’t have backbones. Can you feel your backbone? You’re a vertebrate, like fish and birds.

grow huge – a diver can fit inside some of these animals.

This is a delicate lace coral.

look like sea stars, but they’re skinnier. Their wriggly arms allow them to move fast.

[gatefold - folds back onto previous spread]

Watch out, babies Male go without kai all winter, while they’re sitting on an egg waiting for it to hatch – so this one’s hungry now!

can bunch together when a predator shows up – tens of thousands of kōura rangi can pack into an armchair-sized ball.

Newborn colossal squid are a tasty meal for many animals. Being seethrough helps them hide — but only a lucky few will survive. These bulgy-eyed babies hatched from ant-sized eggs. Cute! Now they’re as big as your thumb. Their fins are too tiny for swimming, so they pump wai out their tube-like funnels to push themselves along. They poo out of the funnels, too. These little invertebrates gobble whatever they can grab, like animal plankton. And they get gobbled, too! Penguins, ika and lots of other animals love to eat tender baby ngū. It’s hard to hide from hunters in the moana, but baby colossal squid have a few neat tricks. They probably squirt ink out their funnels to confuse predators, and they’re hard to spot. They’re a type of glass squid, and are almost totally see-through. Not everyone’s fooled though. Uh-oh! A young toothfish just nabbed some babies. This Antarctic minke whale’s chasing krill – but it might scoop up tiny ngū, too. Swim, babies! One ngū called Whiti escapes. Phew, that was close.

This gulps in wai, then pushes it out between bristly plates called baleen. The bristles strain out the wai and trap little animals like krill.

Ika that thrive in ice Most ika would freeze solid into a fishblock if they touched ice, and that’s everywhere here. Some ika in the Antarctic have a secret weapon – chemicals in their blood stop ice growing in their bodies. Icefish have gone even further. They’re the only ika in the world with no red blood cells (which make blood thicker). Without red blood cells, the icefish’s blood flows more easily in the chilly wai.

Glowing in the dark Whiti’s grown big — soon she’ll start moving into the deep. It’s dark there, but Whiti’s eyes are like headlights! She travels down through the twilight zone (200 to 1,000 metres deep). Only a tiny bit of light reaches this far. Deeper … deeper … Now she’s in the midnight zone (1,000 to 4,000 metres deep). This is where Whiti will live from now on – in darkness. Imagine swimming around down here. All you’d see of Whiti would be lights beaming from around her karu (eyes). This is bioluminescence – light made by living things. The light may help her spot prey and figure out how far away it is. Whiti sees better than any animal in the deep. Her karu are the biggest in the world, the size of soccer balls! The pupils of these enormous karu are as large as apples. They let in 144 times more light than your pupils. Daylight would now be agony for Whiti. But down here, those sharp karu see all prey. And she’s about to attack …

Lights of the deep Most animals in the deep make light, to look for one another or for dinner. Lanternfish flash patterns of light from their bellies. That’s how they find their own species among all the other lanternfish. Millions of lanternfish swim up nearer the moana surface every night to feed. It’s like a galaxy of moving stars.

Colossal squid have eight arms, each with two rows of suckers and sharp hooks in the middle. Most suckers have sharp, pointy ‘teeth’ to grip victims. A few suckers have spikes instead of teeth – another way to snag prey.

She spends most of her time watching for kai. She doesn’t chase ika and smaller ngū, but waits for them to come to her. She spots lanternfish – they’re tasty. Whiti gets ready to attack … Wait. A toothfish glides up. That’s one huge meal! But a feisty toothfish can take a serious chunk out of a colossal squid. Is it worth the fight? Whiti lifts her arms to see it better. It’s big, but not too big. She tenses, then lunges and fires out her tentacles. Gotcha! The tentacles’ hooks snag the toothfish. Whiti grabs it with her eight arms and hauls it in. The toothfish thrashes, but it’s totally wrapped in her strong arms. Whiti gobbles the toothfish the way you’d eat a corn cob. As well as eight arms, colossal squid have two tentacles. These grow up to 2 metres long in adults – longer than the height of most human adults. The clubs at the end have big hooks that are the size of a $2 coin. These hooks can twist right round. The colossal squid is the only known ngū with swivelling hooks.

The super-tough colossal squid beak looks like a parrot’s beak – but upside down. It chops kai into bite-sized chunks.

Doughnut brain After Whiti cuts up kai with her beak, she shreds the chunks with her radula. This is a kind of tongue with rasp-like teeth. The kai needs to be mashed up so it can pass down a tube that is a bit wider than your middle finger. This tube goes through Whiti’s doughnut-shaped brain.

FOR MORE INFORMATION OR TO ORDER https://www.tepapa.govt.nz/about/te-papa-press/childrens-titles/whiti 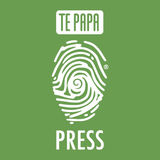 Look Inside: Whiti – Colossal Squid From the Deep

The colossal squid has been the most popular exhibit at Te Papa since it arrived there in 2007. Now this appealing book for young readers te...

Look Inside: Whiti – Colossal Squid From the Deep

The colossal squid has been the most popular exhibit at Te Papa since it arrived there in 2007. Now this appealing book for young readers te...