Fits To A Tee 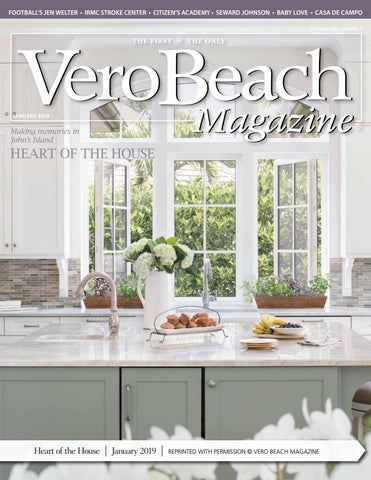 HEART OF THE HOUSE

Heart of the House

or over 40 years Janet and Dave Gallagher and their children enjoyed spending time with her parents in John’s Island. For the Atlanta couple

and their three offspring, school vacations and holiday time translated to Vero Beach time. There were hugs to be shared, gifts to be exchanged, tales to be told, and above all, moments spent together to be cherished. When Janet’s parents passed away, the house they had built in 1985 became hers — no strings attached. They had made it clear their daughter and her husband could do whatever they wanted: They could renovate, sell, or tear it down and rebuild; it was up to them. Before making their decision Janet and Dave looked at homes for sale in other barrier island communities, but at the end of the day they always found themselves coming back to John’s Island. The familiar surroundings and relationships formed over the years appealed to them. So did the three 18-hole championship golf courses. Both Janet and Dave are avid players, and their new home has a wide-angle view of the South Course’s 16th fairway. The prime location and sentimental tugs couldn’t be ignored. “We had so many memories of all the fun times we spent in John’s Island with our family and friends, who would often join us for a golf weekend. We felt comfortable here,” says Janet, sharing a smile with Dave, who adds, “There was never a question about renovating. There was just too much work involved, given the current building codes. We wanted to start fresh.” And

Architect Harry Howle positioned the house so the Gallaghers, both avid golfers, can enjoy a wide-angle view of the South Course’s 16th fairway while relaxing on the lanai.

It’s been said that the kitchen is the “heart of the house.”

manager Shelly Craft. Having spent so much time in John’s Island, Janet and Dave were familiar with the quality work the three firms are known for. Croom Construction has been building homes for 40 years and the Spectrum Interior Design team has transformed many a home in the neighborhood. However, in order to make sure the French overtones they desired would be reflected in the overall design of their new house, the couple met with a handful of architects. They came prepared. “I had torn pages from magazines that showed pictures of the things we liked and we talked about them,” says Janet. “Harry really captured our vision.” Howle’s challenge was to design a residence with a distinctive French flavor that was in keeping with the traditional classic architecture John’s Island is known for. He accomplished this with a pitched mansard roofline, dual chimneys, a cupola with terracotta dovecote and, as he says, “eyebrows over windows.” Janet and Dave couldn’t have been happier as they saw the design for their house taking shape. The word “their” is the operative word, as throughout

The kitchen is Janet’s happy place; thanks to Spectrum’s attention to detail, the island features a shimmering quartzite countertop, and the striking stone hood over the gas range is actually faux painted.

“Janet and Dave were in there with us throughout the project.” – CHARLES CROOM

from their former Atlanta home, Janet and Dave worked

of the way. When there was a design meeting, both were

there. If a budgetary adjustment needed to be made, Janet

touches and a color palette of white, sky blue and celadon

and Dave were on the same page. When a decision regard-

reign. It’s just what they wanted — and more.

ing a specific building material was needed, they made it together. The test of that togetherness came one morning when a

of kitchen cabinetry; you would never know it was there

unless someone told you. Nancy Drew, girl super-sleuth,

en island countertop was scheduled at the last minute. “I

would have loved it. Open two of the tall cabinet panels

and abracadabra — you will find yourself in a room with,

me and said it was important that I go with her and Shelly,

as Janet says, “all my favorite cookbooks, my needlepoint

that I needed to be there,” says Dave, grinning as he recalls

how he found himself walking around a stone yard instead

of teeing up on the golf course.

robing room” and a small bathroom that opens to an out-

slab of quartzite that was more beautiful and durable than

door shower designed for rinsing off after a swim. The rob-

what they had originally sought. It’s also an example of

ing room is a perfect place for shedding soggy swimsuits

Janet and Dave were.

A guest bedroom, with its cozy window seat and plenty of room to spread out, is perfect for visits from the Gallaghers’ children and grandchildren, who, like them, are creating lasting memories.

As Howle explains, “Janet and Dave knew their three children and seven grandchildren would be visiting often,

As a result, their three-bedroom pool home is warm and

just as they did with their kids, so the outdoor shower

inviting and reflects their present-day lifestyle and inter-

ests. Both had retired recently, and even though they enjoy

house without going through any of the main rooms was

many of the same things, each wanted a space of his or her

important. We also made space on the patio for an outdoor

kitchenette with a grill, sink and refrigerator.”

She, the former owner of a successful catering firm, has

It’s been said the kitchen is “the heart of the house,”

and for Janet, David and their family it’s their favorite place

of the house next to the kitchen. He, a former insurance

to be. They gather around the spacious island skirted by a

executive, has a den/office on the opposite side, adjacent

trio of counter stools and the breakfast table surrounded

to the master suite.

Separating the two is a great room where living and din-

Next to the “retreat” is what everyone refers to as “the

He’s glad he made the trip, because they found a large

something 10 times better. You just have to be there. And

But back to the kitchen and “Janet’s retreat,” a tale that bears telling. The entrance is cleverly hidden within a wall

ing activities combine in one glorious open space. A large-

Spectrum’s attention to detail, the kitchen is Janet’s do-

screen television centered above the fireplace has custom

main. She knew what appliances she wanted, and a farm-

cabinetry and shelving on both sides.

house sink topped the list of her must-haves. However, she

With the exception of a few treasured family pieces

and David agreed that the antique stone hood from France,

over the gas range she had her heart set on, was way over budget. Not to worry. Howle designed a similar shape, Croom installed it, and the Spectrum team had it faux painted to look like stone. Perfect. Janet admits that since retiring, she’s not as much into cooking and baking as she once was, which brings us to Thanksgiving 2017. With construction completed and furnishings in place, everything was ready to welcome family for the time-honored feast. Janet had a plan: She would roast the turkey and purchase side dishes from the Village Beach Market, one of her favorite go-to places, freeing up time better spent with the kids and grandkids. It worked so well it’s become a new family tradition. Yet, with any plan or project, there can occasionally be a tiny detail that is overlooked. After all the work in the kitchen had been completed, Janet realized it was in full view of the living and dining room. “If I was preparing a meal, I didn’t want everyone looking in and seeing all the pots and pans. There would be times the kitchen needed to be closed off, so Harry and James came out, worked on the design and Charles (Croom) made it happen,” says Janet, doing a Vanna White turn as she demonstrates sliding one of the double pocket doors closed. “If there ever was a glitch, Charles, Harry or Shelly took care of it right away. There was never a time when any one of them said this is what you have to have, this is what you have to do.” Howle recalls the addition of the kitchen doors well. “It was just like a light bulb went on in Janet’s head. We’ve all gone down that road. Every house we design and the details we make are all very different, just like every client is different, and so that does leave room for change,” he points out. “The exciting part of it for me is that Janet and Dave involved themselves in the whole process, which generates more ideas and different details.” Croom couldn’t agree more. “Janet and Dave were in there with us throughout the project, which is not typical, but honestly it was refreshing from our standpoint. For me the thing that stood out was the relationship, the trust we all forged with the Gallaghers. They let Harry do his magic but they also brought a lot of elements to the project, and they did it together.”

With the exception of a few treasured family pieces, the Gallaghers opted for new furnishings that reflected their desire to “start fresh.” Subtle shades of sky blue, white and celadon reign, as do textures and organic touches.

For years, Janet had collected images of the French-flavored architecture that appeals to her. The challenge was to create a motif while maintaining the traditional classic architecture that defines John’s Island. They accomplished both goals, as seen in the arches, pitched mansard roof, and “eyebrows over windows.”

One of the factors that allowed this collaboration was

just as Janet’s parents did so many years ago. Their children

that Janet and Dave were basically free from other com-

and grandchildren visit often, and friends from Atlanta join

mitments. They had the time and desire to be involved in

them for a round of golf; all is well with their world.

creating their new home. In effect, it became their full-time job, one they enjoyed. Today the Gallaghers are creating their own memories,

“This was home before it was home,” says Janet, smiling as she takes in her surroundings. “It’s been a dream come true.” ❀

Fits To A Tee