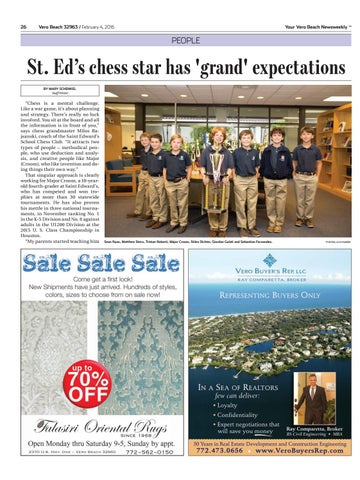 “Chess is a mental challenge. Like a war game, it’s about planning and strategy. There’s really no luck involved. You sit at the board and all the information is in front of you,” says chess grandmaster Milos Bajsanski, coach of the Saint Edward’s School Chess Club. “It attracts two types of people – methodical people, who use deduction and analysis, and creative people like Major (Croom), who like invention and doing things their own way.” That singular approach is clearly working for Major Croom, a 10-yearold fourth-grader at Saint Edward’s, who has competed and won trophies at more than 30 statewide tournaments. He has also proven his mettle in three national tournaments, in November ranking No. 1 in the K-5 Division and No. 8 against adults in the U1200 Division at the 2015 U. S. Class Championship in Houston. “My parents started teaching him

PEOPLE chess when he was little and his mind just wrapped around it,” says Major’s mother, Circuit Court Judge Janet Croom. “He kept getting better and better.” His father, David Croom, is owner of Croom Construction and Whitehall Professional Home Maintenance. The couple’s daughter Katie, 12, also plays but Janet Croom says with a laugh, “She’s retired now. She’s found other things that she likes better.” Not Major, who at age 5 was given special permission to enter the chess club in kindergarten, and now has aspirations of becoming a grandmaster – the highest title a player can attain – in about 10 years. Janet Croom has high praise for Bajsanski, who drives down from Melbourne every Monday to coach club members and since 2011 has given private lessons to Major. “He’s fabulous; we’re so lucky to have a grandmaster in our area,” she says. &quot;Who gets a chance to work with a grandmaster? It’s just a great opportunity to get exposed to international talent.” “My coach and I started out doing puzzles on paper,” says Major, explaining that he tries to visualize the board and think about what his opponent will do before making a move. His preferred openings, a crucial time in the development of the game, are the Scotch Game for white and Caro-Kann Defense for black. “You have openings and you do certain moves at the beginning, and then the middle you just do whatever your heart desires,” says Major, who practices with his mother. He adds with a cheeky grin, “She&#39;s never beaten me since two years ago, after I started getting lessons with my coach. Now I crush her every time. She&#39;s a warmup; at nationals I warm up with my mom and then I just slug for the rest of the day.” And while he realizes that chess can help with math and other cog-

nitive skills “because in chess you have to think a ton,” Major says the best part is simply playing the game. “When you get in there and you&#39;re about to start the game it&#39;s fun. It&#39;s like a new opponent and they play different stuff every time. And you don&#39;t know what they’re going to play, so it&#39;s fun every time.” The benefits of playing chess are so great that in many parts of the world it is part of the school curriculum. At Saint Edward’s, although the chess club is currently comprised of Lower School students, there is always a chess game being played around the campus. Some of the older students, while not in the club, do compete in weekend tournaments. “It improves math logic, problem solving skills and reading comprehension. It takes concentration, focus. These children, who are 7, 8, 9 years old, are expected to stay focused for two or three hours,” says Bajsanski. He adds that chess is closer to art than any other game and he believes that aspect is one of the appeals for Major. “He has the creative side and plays doing some flashy, imaginative moves. He loves that, that appeals to him, that’s what chess offers him,” Bajsanski explains. “When we do one-on-one lessons you can tell by his demeanor, body language, he gets such a thrill getting these moves. Pure joy is displayed in his eyes; there’s a glowing on his face. His creative side is satisfied.” Bajsanski learned to play in the former Yugoslavia and participated in competitions throughout Europe, but stopped competing when he entered law school. He worked at Ohio State University after moving to the U.S. in 1989 and soon began coaching chess. “Very quickly some of the boys won first place in the country,” says Bajsanski, who now coaches at six area schools and also gives private

lessons. “I found it a really personally satisfying experience. It’s more like a passion now; it’s not work for me personally. You develop a relationship with the child and watch them grow and understand the intricacies of the game. Their attention span is longer and you can do more. Their performance excels their expectation.” Bajsanski notes that chess is one of the few games where young players can compete against adults because “chess really has no element of luck; it’s all ability and skill. You can’t claim lucky shot. And you lose

because you made a mistake; it’s your responsibility. So it’s very gratifying when you win an important game.” Asked if he believes Major could attain grandmaster status, Bajsanski says, “If he stays with it, if he doesn’t lose interest, it’s quite possible. The ability and potential is there; that’s clear.” Upcoming competitions for Major include the Florida State Regional Tournament Feb. 6 in Viera, Florida State Championship March 11-13 in Orlando, and National K-6 Chess Championship in Nashville, Tenn. 