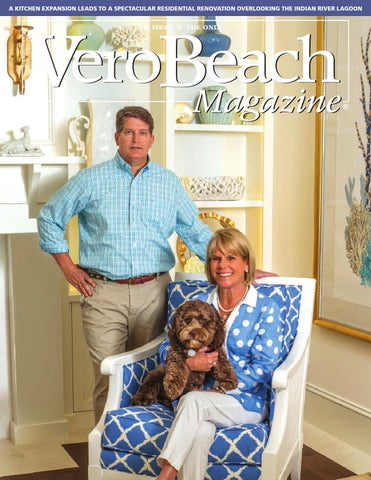 The open kitchen expansion features a family room that looks out over the Indian River Lagoon. Indoor-outdoor fabrics were chosen for style, comfort and durability.

hen John and Leslie Halsted decided it was completed in two-and-a-half months, just in time for time to buy a house in Florida, they began Thanksgiving. looking in Delray Beach, then moved up On a recommendation from their realtor, they contactthe coast to Jupiter and Palm Beach Gardens. All were ed Page Franzel, owner of Page 2 Design, to make their too crowded for their liking. Fortunately, they rememvision a reality. “Leslie walked me through the house bered how much John’s two aunts and explained that eventually they loved living in Vero Beach. The wanted to do some minor renominute they drove into town they vations, but the most important understood why. thing was that she wanted a larger “We looked at houses everykitchen,” Franzel says. “However, where on the island as being on to do that, I felt that a wall needed the water was very important to to be pushed out and the den and a me. When I moved away from it, I full bathroom had to be eliminatreally missed it,” says Leslie. ed. That meant that a lot of support When their realtor took them walls and beams had to go.” to a house in The Moorings overFranzel brought architect Jeff looking the Indian River Lagoon, Ray and contractor Joe Foglia of they knew their search was over. Waters Edge Development on – LESLIE HALSTED There were a few changes the Halboard. On close inspection, they steds eventually planned to make, realized that there wasn’t suffibut Leslie wanted to expand the kitchen right away – a cient footing under the 30-year-old house to allow for the simple and straightforward undertaking. The couple expansion Leslie wanted. What was to have been a relafrom Columbus, Ohio figured the renovation would be tively simple project had become far more complicated

“IT’S THE SIGHT, THE SOUND AND THE SMELL I REMEMBERED FROM YEARS AGO AND MISSED SO MUCH.”

In the living room, Franzel designed the wall unit surrounding the fireplace, and Phillip Warren Custom Cabinetry brought it to life. The gold-framed mirror, gold sconces and fireplace screen add a charming glitter.

than originally anticipated. When the Halsteds were told infinity edge on all four sides. With a blue glass finish, the that their November deadline wasn’t realistic, they decidpool resembles a lagoon. ed to go ahead with the list of other changes they had With every structural change, a new construction peralready been considering. mit had to be secured from the county as well as approval “John and Leslie wanted the French doors removed so from the community’s architectural review committhey could look straight out to the river since the view tee, causing delays. Franzel kept the Halsteds informed of the river was the main reaevery step of the way since their son they bought the house,” says approval was needed as well. Franzel, who had Nano doors They never hesitated to give it. installed. “The bathrooms needFor Jeff Ray, dealing with existed to be updated and the opening conditions in an older home ings to the bedrooms needed to is part of the job. “For a number be widened. The changes they of years, I worked with an hiswanted made in the living room toric preservation contractor, so dictated a complete renovation of I learned early on to expect the the master bedroom. It became unexpected,” he says, explaining a domino effect, with one thing that the great room, which had leading to another.” been renovated twice before, For Foglia and his construclacked the traditional centerline tion crew, this was nothing new. leading from the foyer through “The project started out at a certo the lanai, so he created one. tain level; and when the Halsteds “Once we arrived at the new wanted layout changes as well as great room space, the fireplace new windows and bathrooms, needed to be moved.” we brought everything up to The exterior of the house, the standard a house like that which over the years had deserves. Had we known what remained much the same, was was involved, it probably would updated with new windows, have been better to start over, but shutters, front door and porch, we were already too far along,” coach lamps, focal columns and Foglia explains. “Was it worth architectural modifications. All it? Absolutely. I’ve worked with new landscaping was installed John and Leslie Halsted enjoy their new home with 10-monthPage for eight years; she underas well as a Page 2 Design cusold puppy “Teddy.” stands construction schedultom security gate. ing and had everything pretty Today the Halsteds have a brand well put together,” he adds. new lagoon-side home that is everything they hoped it There was a great deal to put together. Not only were would be. Open, fresh and colorful, it reflects their peradditional concrete footers needed to shore up the sonalities and lifestyle. foundation, new plumbing and electrical wiring were required to bring the house up to current energy-efficient ince the renovations started with the kitchen, standards. let’s begin with a look at some of the changes The surprises kept coming. When the bricks surroundthere. Open and spacious, the first thing you ing the swimming pool were removed to make way for see is an impressive custom-built island with Calcutta Olympic stone, Franzel received a frantic call from marble countertop. Franzel’s search for four full slabs of Foglia’s crew. “They said, ‘Page, you need to come here marble that would seamlessly dovetail took her to Miami right away and take a look,’” Franzel says. “When I got where she also found azul macaubas quartzite with colors here and saw there was nothing beneath the pool but a big of the sea for perimeter countertops. Handsome hardhole, I couldn’t believe it. The sand had all been washed wood floors are people traffic and puppy paw forgiving. away.” That discovery led to removing the original kidHand-blown Juliska light fixtures shine over the island ney-shaped pool and replacing it with one featuring an illuminating the open area, which includes a cobalt blue

banquette and dining table for informal gatherings. The more formal dining and living areas share space in the great room where new hand-waxed hardwood floors are bordered by limestone to prevent moisture encroachment. Gigi Bair, Page 2 Design’s director of design, found – and fought for – the eye-catching chandelier over the dining table. “When Gigi first showed it to me I said, ‘No way, it’s not going to work in this house.’ I thought the shells were crystals, which would have been far too formal for Leslie’s taste,” says Franzel, who admits that once the Troy light fixture was Franzel and her team selected everything, in place, it was per- including the china, glassware and silverware fect. “It’s one of Les- – even the napkin rings. lie’s favorite things.” Even though Leslie was either at their home in Ohio or traveling with John during the renovation, she remained closely involved. When she sent Franzel an image of a decorative pillow in shades of violet, blues and greens that she liked, a color palette emerged. “We started with one fabric that dictated the colors,” says Franzel, referring to a matching pair of sofa pillows in the living room where indoor-outdoor fabrics were selected for style, comfort and durability. When she and Bair couldn’t find the lamps they wanted for the sofa table, they used cobalt blue ginger jars to fashion a perfect pair. Franzel designed the wall unit surrounding the fireplace; and Phillip Warren Custom Cabinetry brought it to life. “Leslie was very particular about what she wanted in the bedroom suites, and she sent us bedding selections,” says Franzel. “The ones for her two daughters’ rooms were fresh and colorful. The one for the master bedroom paled in comparison, so Gigi pulled a brighter option together, hoping Leslie would like it. She loved it,” says Franzel with a big smile. She has every reason to smile. What started as a two-and-a-half-month kitchen remodel turned into a

A chandelier with layers of multiple shells illuminates the dining area where colors found in furnishings, a centerpiece and place settings evoke feelings of sky and sea.

year-and-a-half turnkey project. “All of us, including Gigi, designers Mimi, Ruthie and Marliee; and our office assistant, Allyson, were working on it. We ended up buying every piece of furniture, all of the china, glassware, silverware and serving pieces all the way down to light bulbs and extension cords. We even stocked the pantry. We probably did more custom pieces than we’ve ever done before; it was entirely different and it was fun.”

The color palette for the living room was inspired by the violet, blues and greens of a decorative pillow. Franzel used this as a springboard for the selection of fabrics and accent pieces.

Franzel built the bedroom design around bedding selections made by Leslie, using pink and green accents to bring the room to life.

The outdoor living area with an expansive view of the Indian River Lagoon is one of Leslie’s favorite places to be. Recalling her formative years by the water in South Hampton, she says, “It’s the sight, the sound and the smell I remember from years ago and missed so much.”

Bair couldn’t agree more. “In the beginning, had we known the extent of what was going to be involved, we probably would have recommended starting all over. The great thing is that we worked with the challenges and everything turned out beautifully. Every room has been done to Leslie’s taste and satisfaction. There has been no compromise in quality or design.” Even though the Halsteds had been kept fully informed throughout the project, they had no idea what the end result would look like. They trusted Franzel to make their vision become a reality. “There was that something that clicked with Page and me from the very beginning. We were on the same page,

and I knew right away everything was going to be fabulous,” says Leslie. “When we walked in even John, who is very laid back and kind of quiet said ‘Wow!’ I was in such awe I had tears running down my cheeks.” “Every morning I get up, and the first thing I do is have a cup of coffee and go outside. It’s the sight, the sound and the smell I remembered from years ago and missed so much. And there’s always something to look at. We have a blue heron that comes every day and there are dolphin families, with the mothers teaching their babies how to catch fish. It’s the cutest darn thing,” says Leslie, all smiles. “We wanted a fresh and happy Florida home, unlike what we have anywhere else, and now we do.” &#96;