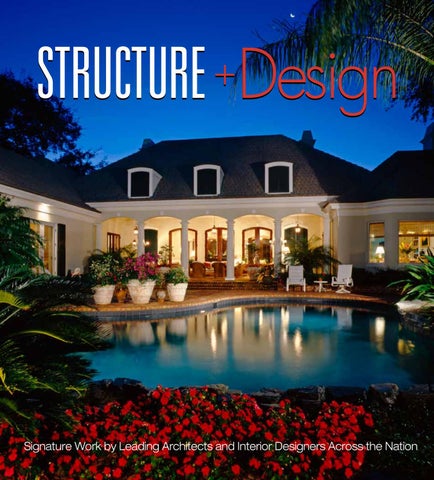 Signature Work by Leading Architects and Interior Designers Across the Nation

HARRY GANDY HOWLE ARCHITECTS & ASSOC. VERO BEACH, FL Harry Howle’s work spans the highlands of North Carolina to Florida’s coastline and is as far reaching as Cozumel. Holding licensed certification in the allied disciplines of architecture, landscape architecture, and interior design, Harry and his firm competently understand, plan, and provide for every aspect of design. However it really goes beyond that, long before Harry’s career began thirty-three years ago. A native of South Carolina’s coastal plain, where some of the most splendid examples of Southern Classical domestic architecture exist, Harry absorbed the presence of these structures growing up. His early exposure to the grand style and reasoned order of these distinguished plantation homes imbued him with his intuitive classical approach to architecture. It simply became second nature to him. Later on, Harry’s innate design skills were deftly honed during his education at Clemson University and the University of Georgia. In addition, he has been profoundly influenced by the architectural treatises of Vitruvius and Palladio, who both defined the splendor of classical antiquity, as well as the Spanish Colonial vernacular Addison Mizner brought to Palm Beach in the 1920s. In particular Harry respects Mizner’s penchant for blurring the distinction between inside and outside through the generous use of wide balconies, glazed cloister ways and open loggia rooms.

“Classical architecture is not susceptible to casual interpretation because it is based on exacting mathematical proportions.” - Harry G. Howle

ABOVE: This example of Classicism bathed in the glow of the setting sun is anexpression of pure classical antiquity employing the Ionic Order. The Orders of classical architecture are not susceptible to casual interpretation because each is composed of a melody of exacting components. The comparative relationships of these Orders from the simplest to the most complex are closely related by a series of mathematical progressions that have stood the test of time.

The presence of the portico overlooking the pool is a reflection of the precepts of its chosen vernacular in its purest form, avoiding the pitfalls of eclecticism, which tends to promote architectural contradictions and a lack of discernible style.

The Sylvester palms stand as sentries guarding the approach from the lower garden of this residence offering filtered shade around the languid pool and an array of dancing shadows on the surfaces below them.

FACING PAGE BOTTOM LEFT: The kitchen in view beyond takes its leading role from the movie “Something’s Gotta Give” using white antique style cabinetry, stainless commercial appliances, soapstone countertops and white subway tile for the backsplashes. FACING PAGE BOTTOM RIGHT: A popular feature for an outdoor lifestyle includes areas for alfresco dining, while offering a view of the pool and the placid serenity of the body of water beyond. These living areas are also used to provide a seemingly transparent transition between indoor and outdoor spaces.

ABOVE: The reasoned order of this beautiful Georgian faĂ§ade is created by the correct use of its architectural principles resulting in the properly measured proportions to present a welcoming greeting upon arrival to this beachfront residence.

There is always something magical about the serenity of a veranda that evokes memories of lazy summer afternoons curled up on a sofa, book in hand, savoring sweet tea and bathed by the soothing ocean breezes.

FACING PAGE: Upon entering the residence, the Stair Hall presents a double-

helix staircase beautifully crafted with marble treads and decorative iron handrails, which beckons oneâ&#x20AC;&#x2122;s ascension to the sanctuary of the private quarters above.

“Domestic architecture should be a result of the fulfillment of a homeowner’s dreams, but it must respect the purest precepts of its chosen vernacular.” - Harry G. Howle

The historical antecedents of the architectural vernacular coined “Anglo-Caribbean,” draw a resemblance to 16th-century St. Augustine and other small settlements in the Caribbean islands. These outposts were first settled by the Spanish, building single-story masonry structures along narrow streets. Wood-framed upper stories were added by the English in the 1700s.

FACING PAGE TOP: Beyond the entry portal of the British West Indies vernacular residence awaits the intrigue of an enchanting courtyard surrounded by columned loggias and the soothing resonance of water dancing in the fountain.

Photograph by Kim Sargent FACING PAGE BOTTOM: Arriving home, this welcoming feature embellished with mahogany doors and columned pergola greets the owner with space to stow away the classic automobiles, while the Cotswold dormer provides refreshing light to the service quarters above.

Structure + Design: Signature Work by Architects and Interior Designers Across the Nation

Structure + Design: Signature Work by Architects and Interior Designers Across the Nation