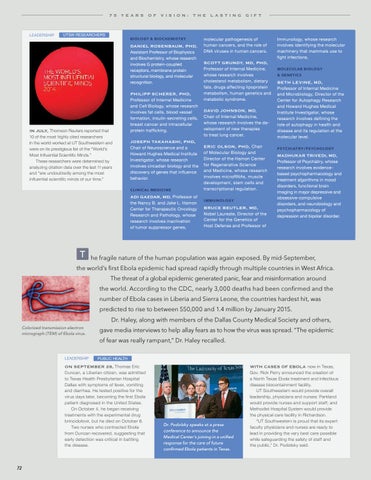 75 YEARS OF VISION: THE LASTING GIFT

IN JULY, Thomson Reuters reported that 10 of the most highly cited researchers in the world worked at UT Southwestern and were on its prestigious list of the “World’s Most Influential Scientific Minds.” These researchers were determined by analyzing citation data over the last 11 years and “are undoubtedly among the most influential scientific minds of our time.”

Immunology, whose research involves identifying the molecular machinery that mammals use to fight infections.

BRUCE BEUTLER, MD, Nobel Laureate, Director of the Center for the Genetics of Host Defense and Professor of

BETH LEVINE, MD, Professor of Internal Medicine and Microbiology, Director of the Center for Autophagy Research and Howard Hughes Medical Institute Investigator, whose research involves defining the role of autophagy in health and disease and its regulation at the molecular level. P S YC H I AT RY / PSYCHOLOGY

he fragile nature of the human population was again exposed. By mid-September,

the world’s first Ebola epidemic had spread rapidly through multiple countries in West Africa. The threat of a global epidemic generated panic, fear and misinformation around the world. According to the CDC, nearly 3,000 deaths had been confirmed and the number of Ebola cases in Liberia and Sierra Leone, the countries hardest hit, was predicted to rise to between 550,000 and 1.4 million by January 2015. Dr. Haley, along with members of the Dallas County Medical Society and others, Colorized transmission electron micrograph (TEM) of Ebola virus.

gave media interviews to help allay fears as to how the virus was spread. “The epidemic of fear was really rampant,” Dr. Haley recalled. PUBLIC HEALTH

WITH CASES OF EBOLA now in Texas,

Duncan, a Liberian citizen, was admitted to Texas Health Presbyterian Hospital Dallas with symptoms of fever, vomiting and diarrhea. He tested positive for the virus days later, becoming the first Ebola patient diagnosed in the United States. On October 4, he began receiving treatments with the experimental drug brincidofovir, but he died on October 8. Two nurses who contracted Ebola from Duncan recovered, suggesting that early detection was critical in battling the disease.

Gov. Rick Perry announced the creation of a North Texas Ebola treatment and infectious disease biocontainment facility. UT Southwestern would provide overall leadership, physicians and nurses; Parkland would provide nurses and support staff; and Methodist Hospital System would provide the physical care facility in Richardson. “UT Southwestern is proud that its expert faculty physicians and nurses are ready to lead in providing the very best care possible while safeguarding the safety of staff and the public,” Dr. Podolsky said.

Dr. Podolsky speaks at a press conference to announce the Medical Center’s joining in a unified response for the care of future confirmed Ebola patients in Texas.

Part III of our historical series "75 Years of Vision". This edition highlights the exceptional advancements in health care and medicine made at UT Southwestern Medical Center from 2000-2015 and the incredible vision and generosity of our community that made it all possible. Learn more at swmedical.org