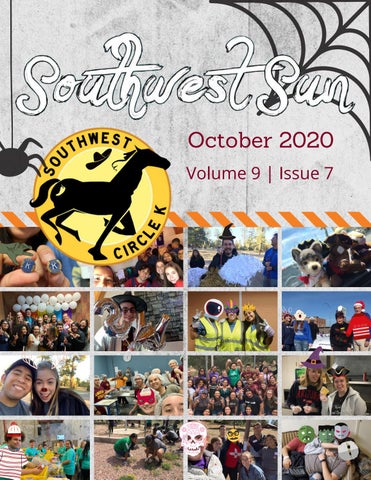 Directory Want to reach out to a board member? You can find their contact information here

Hello Southwest, I hope you are all doing well and enjoyed Spooky Season! As always the district board is hard at work to make sure we finish this semester strong and to start planning for the spring semester. I enjoyed meeting everyone that came to DLSSP and Fall Rally. Both of these events went very well, and we were able to successfully move these events online and even being able to incorporate new aspects into each event. I wish everyone the best of luck with their zoom classes, upcoming exams, and Finals. Remember that CKI canâ&#x20AC;&#x2122;t accomplish anything without you, the members who are out there doing the service and making a difference.

Hello everyone, I hope you like this special edition of the Southwest Sun. I wanted to take the festivities of this month into the bulletin and it was so much fun to get really creative with it! This month passed by so quickly with lots of fun events, colder weather, and end of the school semester drawing near. With that said CKI is still going strong. If you haven't yet, VOTE! It's important at every level and you can make your voice heard on what you think is best for your community! That's all I have to say this time, until next time Stay spicy Southwest!

FALL RALLY 2020 Earlier this month was Fall Rally, the last district event for this semester. It was a great three-day event to unwind, hang out with members from all over the Southwest District, and see some new faces from outside the district. Notable guests were Kaitlyn Carroll, our International Trustee from Florida State University, and Austin Underwood, another International Trustee from THE Ohio State University, who was also at our District Convention earlier this year. What great friends supporting friends! Friday was all about Fellowship and getting to know each other before the swing of things. After introductions of Livia, the Fall Rally chair, Josh, the Governor, and all of the Group Leaders for the weekend we jumped right into playing Matchmaker. The premise of the game is to ask questions of one person and based on their answer if you disagree you turn your camera off. This continues until thereâ&#x20AC;&#x2122;s one person left who is then their match! Some questions from these rounds that quickly lost people included, Is a Hot Dog a Sandwich, and Iron Man or Captain America? After playing three rounds of that we then played two games of Kahoot. The first was focused on Toy Story Trivia (of course) and the second was about CKI

Day Two the next morning jumped right into the day with a presentation by Nicole, our Service Chair. In it, she explained ways we can turn our hobbies into service. There were some minor technical difficulties, but we got through it. Afterward, we were able to brainstorm together some ways we can take what we like to do into something we can do to help our communities. Some ideas that were brought up included for cooking/baking you could donate any food made to a food bank. For our runners or walkers, you could pick up trash as you go, or even for our creative members consider selling art to help fundraise for a cause. After explaining many more ideas we went into our first Campfire Chat of the day. During the times we were in the Campfire Chats we had a discussion and/or played an activity. To get to know each other better for the first Campfire Chat we played some ice breaker games like guessing whose interesting facts go to which person. There was a bit of time left so we got started on Trivia. From there it switched over to Jeopardy

where it continued to test our knowledge on CKI

This was followed by a small break and

with the four groups competing against each

when we came back all together we had

other. There was Team Rex, Team Forky, Team

our next presentation, which was on

Buzz, and Team Lotso. After many questions and

WASH/UNICEF. We learned about one of

collective confusion, Team Forky came out as the winners! With extra time in the schedule we played another Kahoot game, this time Halloween themed before we switched over to a quick game of skribbl.io. Before the night was ended we went into small discussion groups. In them, some people played games like Among Us while others passed the time by chatting. We grouped up again to end the evening. For those who wanted to continue to hang out, they played a few games of Among Us before day two the next morning.

our partners, UNICEF, the specific part we fundraise for, WASH, and all the ins and outs of that. This informational session was then followed by another Campfire Chat session, where some groups continued playing games or started on the escape rooms. That intermission then led to another presentation, this time about our partner the Peace Corps. They taught us what the Peace Corps does and what we can do with them if we decide to join them. It was very helpful and educational for

members to learn more about the Peace

included was the value of voting and how we

Corp and consider if it is something they

want to do in the future. Next, we met again

by voting. This then led to the service project

from that presentation with our groups for

time where we had an hour to either write

another Campfire Chat. After another half

cards to the elderly or play Freerice.

hour of some fun doing scavenger hunts we

Following that, it was time for the closing

met up again, but this time for a CKI Alumni

session. During the closing session, it was

Q&A panel. We got to ask questions of Laura

time to recap all that there was in store in

the future! For those who attended Fall Rally,

we hope you had a great time, and if we

member. They gave great insight and

see you at DCON next semester.

Day Two to an end. The following morning we had a tiny introduction for the day, but just as quickly we got into the first presentation of the day by Aisha, our Social Awareness chair. This presentation explained the importance of Civic Engagement! Some of what this

ALONE WE CAN DO SO LITTLE;

TOGETHER WE CAN DO SO MUCH 7

The event started off with quick introductions of the hosts who were later the leads for the breakout room activities. Then it went into the mini-presentations which covered the WASH project and Child Safety. The next activity brought people into the breakout rooms to do the Halloween Bingo. Options like knowing all the words to the Monster Mash song, living near a cemetery, or owning Halloween themed earrings were options. This was a quicker activity to do which led to revealing the candidates of the costume party. The options were Lizzie as Boudicca, Alyx as Halloween Energy, Meit as Hitachi from Naruto, and Abi as Ariel. The rules were explained about how to cast your vote. With that explained it went into the next portion, which was watching the Haunted House Tour videos of the Queen Mary Ship. It detailed the history of the Queen Mary and the kinds of indescribable occurrences visitors have experienced. This allowed for enough time to pass that with the costume contest then closed the winners were revealed as Lizzie and Austin. For the latter, it was from a costume contest on the CKI website between Tana, Ethan, and Austin.

By this point, it was time for a fundraising update which showed that we were at $221 raised! Next was time for another breakout room session where they competed in scavenger hunts where there were 2 minutes given to grab miscellaneous items asked of the group. After this brought the Tricks-for-Treats portion of the event. The premise was people pledged varying amounts of money in exchange for members doing challenges. A fan favorite from the challenges was a pie to the face. Especially so in that three people from the Southwest put down a pledge for Josh to get pied in the face. Another notable challenge included taking shots of lemon juice, which Kyle took to another level by chugging lemon juice. Would. Not. Recommend. Don't try that. Alissa was also challenged to do this, but with a lack of lemon juice, she took a shot of soy sauce, an acceptable replacement for the challenge, but not for the weak of stomach. Other challenges included drawing a self-portrait, doing dances, and showing embarrassing photos. This brought the event to an end and with a final check of the grand total raisedâ&#x20AC;Ś$550! It was a great fundraising event alongside a fun time to witness the chaos of the challenges.

Birthday: October 8th Home club: NAU Hi! This is me heheh. I'm the District Bulletin Editor. Besides the bulletins I'm behind the screen for the social media and website.

Birthday: October 9th Home club: ASU She is the Social Awareness Chair. Her role consists of helping educate our members on different topics either through events or resources.

Birthday: October 18th Home club: NAU This hardworking bean is our Recruitment LTG and she is also serving on the International board! At its core as LTG she helps clubs in recruiting members 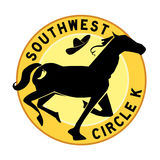 Inside you can read up on what happened during Fall Rally, get all the details about the Virtual Halloween Fundraising Party International h...

Inside you can read up on what happened during Fall Rally, get all the details about the Virtual Halloween Fundraising Party International h...