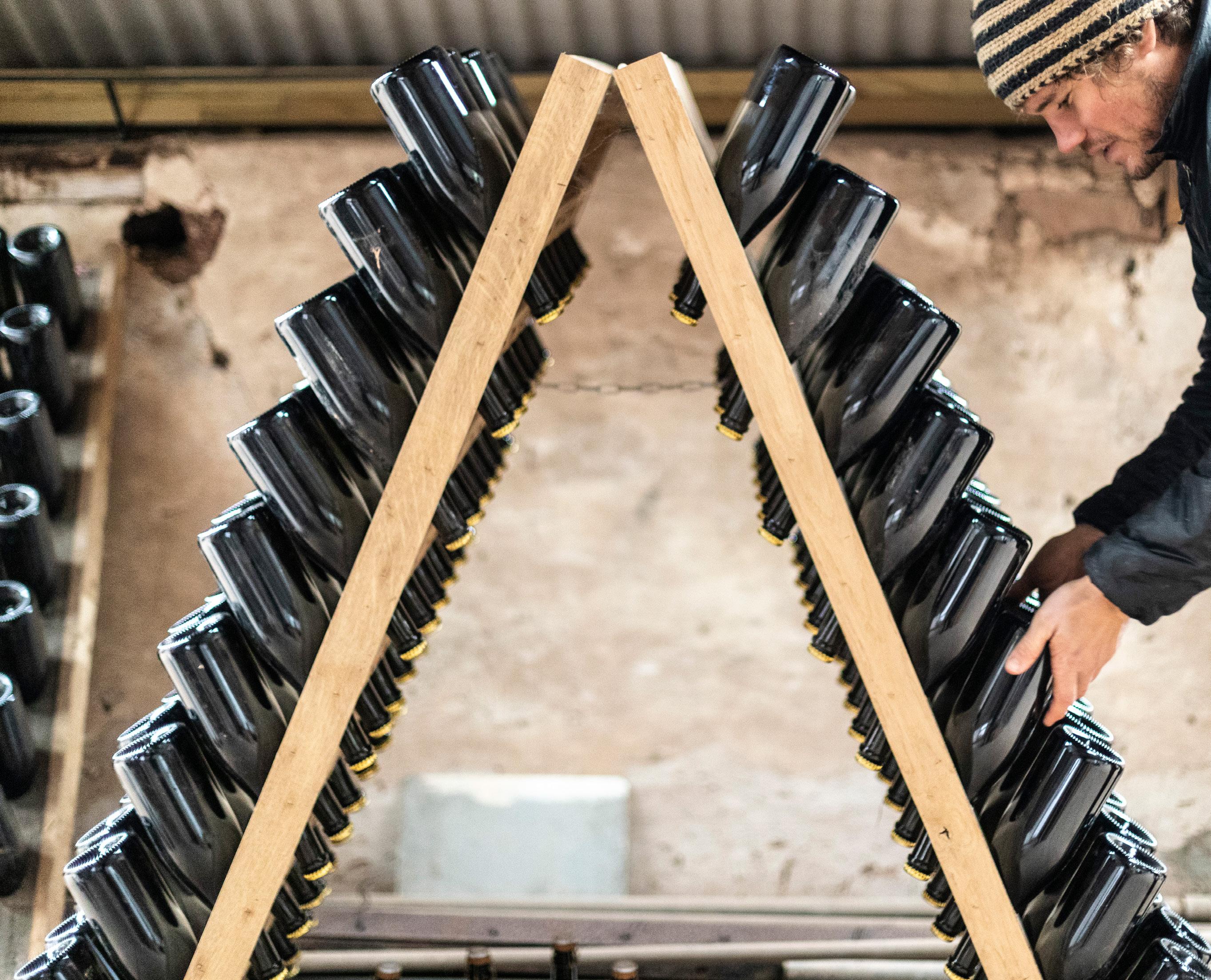 MORE THAN JUST A FESTIVAL, THE TXOTX SEASON EMBODIES THE VITALITY AND VIBRANCY OF THE BASQUE COUNTRY’S ELECTRIFYING CIDER WORLD. ADD TO THIS THE GASTRONOMIC HERITAGE OF SAN SEBASTIAN, AND ADAM WELLS FINDS AN UNBEATABLE PROPOSITION

Let’s cut to the chase here, and in Basque cider country the chase is txotx. If you visit Astigarraga, Hernani, San Sebastián and you don’t attend at least one txotx meal then I’m afraid that your Basque journey is incomplete and you need to go back as soon as you can. The white hot soul of Basque cider is bedded as deeply in the sizzle of cod omelette, the rich, hot, oily flesh-reek of perfectly rare steak, the clackety tumult of crowded dining rooms and the long lines of waiting punters snaking from colossal chestnut casks as it is in the glittering lace of sagardoa that arcs from those casks into impossibly thin proffered glasses.

Txotx is a celebration of the culmination of a vintage; the first taste of the fermented cider. Anywhere else it would be filed under “festival”. Here it happens every day for three months at every cidery. Just think about that for a moment. By the time it closes in April, over 800,000 people have attended. Every last one of them eating the set menu of chorizo in cider and honey, salt cod omelette, cod loin with peppers, t-bone steak and cheeses. And every last one of them drinking cider. It almost doesn’t matter which cidery – sagardotegia – you visit. The experience at each one will be like nothing you have ever done before. This is cider writ gourmet; writ spectacle; writ theatre. For the record, we went to Zelaia, pictured immediate right, and it was magnificent.

But the funny thing is that txotx as a festival really hasn’t been around all that long. Merchants and gastronomic societies may have dropped by at cideries to taste and procure the first of the vintage for centuries, but the public meals, the set menus, the theatre – that’s only existed for about as long as the Beatles. From nought to 800,000 in half a century. It’s an impressive statistic – one that cider regions around the world would do well to bear in mind.

Cider is everywhere in San Sebastián, but it’s everywhere you’re not looking. It’s hidden in huge fridges under the counters at bars. It’s on the bottom shelves of shops, beneath Rioja and the local wine, Txakoli. It certainly looks the part; always served in an elegant 75cl wine bottle, in the style of a German Riesling or an Alsatian white. At a cursory glance from an uninformed consumer it could easily be mistaken for wine, until you see the price tag of just €3 or so for even the most premium, gold-topped bottles. As is so often the case, even in the heartlands of cider world, the juice of the fermented apple is generally seen in San Sebastián bars as a poor second cousin to that of the grape.

A shame, because Basque cider is rocketing at the moment, thanks to cideries like Zapiain and Zelaia, who treat their fruit with a winemaker’s reverence, sensibility and equipment. And let’s dwell on that fruit for a moment, because it’s an important aside. Unlike North-West France and South-West England, where tannins often reign supreme, this is the land of sharps. What bittersweets are used tend to sit on the mildest end of the spectrum; there really isn’t much tannin here, if any. What there is, is a beautiful rasp of acidity that whispers through the oil and fat and protein of local cooking. The cider is built to match the food – and it does so, beautifully. You won’t often see apples named on labels, but something in the

region of 115 varieties are permitted by local legislation.

That legislation was put in place to catch up with Spain’s other great cider region, Asturias, and to lay down a Protected Designation of Origin (PDO) designed to safeguard quality and tradition.

The Basque PDO falls into three categories: Gorenak, comfortably the largest, which permits apple varieties from outside the Basque Country, and requires an independent rating of at least 53/100. Then there’s Euskal Sagardoa, marked by a red top. Again, a score of 53 is required, but the apples must be Basque. Finally there’s the Gold Top, Euskal Sagardoa Premium. Only Basque apples qualify, and the cider must be rated at least 70 points. Realistically we’re talking the top 1%.

But how do you drink these ciders? Well, stay your hand, don’t pour all the way to the top of the glass. Whether you’re catching cider from a barrel or pouring from a bottle, you only want an inch – maybe two inches at a time – poured from a great height. Why? For a delicate seam of carbonation, a ribbon of beads that lift the liquid and heighten its fruit. In Asturias you’ll see bartenders pouring with arms fully stretched, but you don’t need to be as showy as that – a foot or two is more than sufficient distance. And many of the ciders have specially-designed corks to prevent you making too much of a mess.

“THERE ISN’T MUCH TANNIN HERE. THERE IS A BEAUTIFUL RASP OF ACIDITY THAT WHISPERS THROUGH THE OIL AND FAT AND PROTEIN OF LOCAL COOKING”

In 1967, Basque cider production was as low as 1.25m litres in the year. These days it’s risen back up to 13m – and growing. There are festivals in summer and at harvest time and at the start of the year, of course, there is the txotx season. Cideries are improving their techniques – even experimenting with different styles, like champagnemethod and ice cider – but chiefly perfecting their classic, natural, dry still. This unique, dazzling, refreshing, natural cider, so closely entwined with the cuisine of one of the world’s gastronomic epicentres, is getting its mojo back, and no mistake.

ADAM WELLS is a drinks writer, covering cider for Graftwood and Malt Review in addition to his articles in Full Juice. He writes extensively about whisky for several magazines and websites, works in the wine trade and holds the WSET Diploma. HARITZ RODRIGUEZ aka Ciderzale, is a Basque cider enthusiast, journalist and marketing consultant. ciderzele.com

HOW TO GET THERE

A regular, one-hour bus ride will take you straight from Bilbao airport to the centre of San Sebastián. The cideries of Astigarraga are then just a 15-minute bus ride… or a very pleasant hour-or-so’s walk away.

This cider museum, complete with its own orchards and handy tourist office, should be your first port of call on arrival. You’ll learn about the historic, ancient beginnings of Basque cider and track its journey through the tumult of the 20th century, to the present day. Topped off with a few tasters, a healthilystocked gift shop, and a chance to plan your other visits. www.sagardoarenlurraldea.eus/en/

You should try to visit as many cideries as you can, but if you can only get to one, make it Zapiain. It’s the biggest Basque cidery, at around 1,000,000 litres a year, but its output is entirely natural, entirely full-juice… and outstanding quality. They also lead the region in innovation; their ice and fortified ciders are delicious, and their brandy’s no slouch either.

The all-important. You have dozens of options here, but the season only lasts from mid-January to April, so be sure you book your visit for then. And don’t forget the other 799,999 visitors … txotx evenings book up well in advance. Prices are generally around €35pp. For the quantity and quality of food… and bottomless cider straight from cask… it’s a thief’s bargain.

THE BARS OF SAN SEBASTIÁN.

Another huge generalisation, but the experience is so universally excellent that you’re more or less well-set whichever you stumble into. Order yourself a plate of pintxos – the local specialities, disarmingly simple but hugely varied small bites of food – and a bottle of whatever cider they sell, sit back, and one small pour at a time, realise you’re starting to “get it”.

The best bottling from a cidery at the top of its game. Bone dry and sitting slap bang in the middle of the Basque cider flavour scale that runs from citrus to tropical. Brimming with green apples, sherbet and sorbet-fresh lime juice. Utterly refreshing.

Made from local apples including Txalaka, Urtebia and Gezamina, this shares the whipcrack acidity of the Zelaia, but its fruit tends in a slightly deeper, more tropical direction. Impressive and deliciously lingering. Demands a lazy afternoon in the sunshine.

A single variety ice cider Zapiain makes from the Errezile apple. A decadent, unctuous nectar of a drink, kept fresh by a core of piercing acidity that lends brightness to the richer caramels, baked apples and brown sugars. Essential sipping for lovers of great dessert wines… or simply those with a very sweet tooth.

The deluxe edition of Astarbe’s champagne-method Byhur, this one takes its name from the 24 months it sits on its lees before disgorgement after its second fermentation in bottle. A yeasty, brioche richness beautifully accompanies the apple and citrus of the fruit, offset by a fine, creamy mousse.