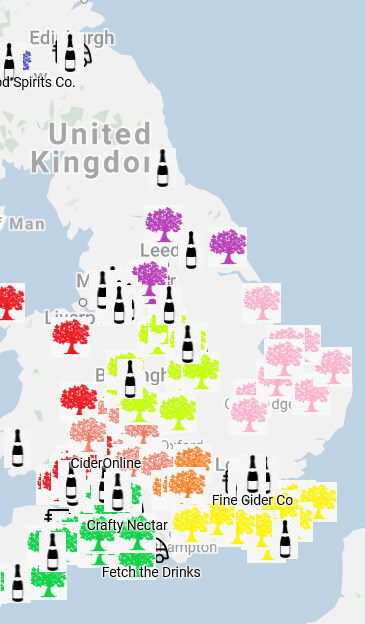 If we didn’t have places that grow apples we wouldn’t have cider. But as Gabe Cook explains, the full value of orchards is way higher than we might think

Orchards are lush. They really are the most special, unique environments, and are one of the most important uses of land in the UK today. For me, what makes them so intriguing is that they are on the front line of the interplay between the anthropic world and Mother Nature. It’s like they are entering into a joint venture for mutual gain.

What one must remember, of course, is that orchards are inherently unnatural places. Their entire existence is brought about through a series of considered decisions: location, size and shape of tree, spacing distance and selection of varietals are all entirely conscious decisions. Human decisions. But that’s not to say that nature doesn’t get to have its say – the quality, quantity and distribution of the fruit produced every year is certainly not determined by horticultural practice alone.

I think that’s why orchards appeal to me so much – orchards are managed, and cider apples are produced, using methods that have been around for hundreds, if not thousands of years. They are so much more than simply productive pieces of land. They are entirely entwined into their local culture and heritage and today provide socially and environmentally crucial functions – they are in essence, highly sustainable.

Now, I understand that mention of the word “sustainable” or “sustainability” can elicit an eye roll from some people, probably because they’ve heard the terms being used in a macro context, and attached to issues which seem entirely out of an individual’s control, or without any clearly defined meaning.

But, in the context of the wider world, for something to be “sustainable” it has to operate and function in a net positive way in relation to its economic, environmental and social interactions. Or in other words, something that does stuff that it can continue to do in the future without harming other stuff.

When you break it down, orchards are wonderfully sustainable places. And here’s how.

As with many forms of agriculture, the growing of apples has become less profitable for farmers over recent decades. There is still some money to be made, as demonstrated by the tens of thousands of acres of commercial apple orchards planted in the UK. And now, orchardists are beginning to understand the extra value that can be derived from old fashioned apple varieties from older, standard orchards.

The economic benefits of orchards extend beyond that experienced by the grower, however, as cider orchards have other positive financial impacts, too. In the commercial cider apple growing regions of the West and South West of England for example, an entire industry has been created around the growing of these apples, providing crucial jobs in rural areas.

Specific pieces of machinery are necessary to manage orchards and harvest the fruit, and these are developed, built and maintained by local agricultural engineers.

Specialised apple contractors are needed during the autumn to harvest the fruit, whilst many local haulage firms will be transporting nothing other than cider apples during October and November, day and night.

Although I described orchards as unnatural environments, I meant that purely in the context of them not occurring in this form within nature. That is not to say, of course, that they do not retain any natural value – orchards open the front door for all sorts of wild things because, let’s face it, it’s as close to a woodland environment as many parts of the world get these days, postNeolithic transition.

“PEOPLE OF ALL AGES CAN DISCOVER NATURE, EXPLORE THE CHANGING SEASONS AND LEARN VOCATIONAL SKILLS SUCH AS PRUNING, HARVESTING AND GRAFTING”

Orchards are hotspots for biodiversity; a result of the mosaic of habitats they encompass, including fruit trees themselves, but also scrub, hedgerows, hedgerow trees, non-fruit trees within the orchard, the orchard floor habitats, fallen dead wood and associated features such as ponds and streams. As a result, uncommon and rare birds, invertebrates, mammals and amphibians all call traditional orchards home.

Of course, one can not gloss over the fact that most modern apple orchards will be utilising spays and applications to control certain invertebrates and fungi. But an orchard of any description will always be more bio-active than a patch of mono-culture arable crop that is devoid of any adjoining habitat, and a sub soil that has been tilled into oblivion.

One should also consider that, like any tree, apple trees are net carbon sequestrators. Through photosynthesis they are storing up carbon dioxide that would otherwise be present within the atmosphere. That’s right– in order to help combat the ravages of global warming, I propose that we should all drink more cider!

Orchards can play an important role in the general health and wellbeing of individuals and entire communities. Within urban environments, Community Orchards have grown in popularity over the last decade, driven by a genuine desire for communities to have a place to meet and rediscover the benefits and pleasures of cultivating green spaces.

These oases of green space nestling amongst the concrete hum can provide a fantastic place for isolated or otherwise disparate people to come together to be social, active and engaged. They promote the health benefits of fresh produce and outdoor exercise, improving wellbeing and making our cities and neighbourhoods more pleasant places to live. They also offer a hands-on approach to learning. People of all ages can discover nature, explore the changing seasons and learn vocational skills such as pruning, harvesting and grafting.

Orchards also play an important role within the rural communities in which they normally sit. They have a massive social value. They are places where people go to exercise, walk the dog, have a picnic with family, go camping with friends, or steal a kiss. There is nothing better than sitting in an orchard during the height of blossom with good weather, good company and good cider. They are the seat of wider social gatherings – celebrations, feasts and festivals.

For many people, myself included, orchards are more than an amenity space – they are the epitome of the cultural heritage of a particular place, a particular landscape. Their mere presence is an inherent positive contribution to society.

A piece of research undertaken in Herefordshire and published in 2012 sought to understand the economic, environmental and social value of orchards in hard cash terms. To ascertain the social value of an orchard, nearby residents of the orchards in question were invited to events to guage their perspectives. One of the study orchards was on private land, with no footpaths or public access, invisible from any road or hill as it was predominantly surrounded by woodland.

Yet the local residents to this invisible orchard gave it the highest ranking of importance of any of the orchards being studied. Why? The residents took immense satisfaction that this old orchard was simply there. How lush is that?

An edited extract from Ciderology
This story is from:
Full Juice - Episode 4
by Susanna Forbes