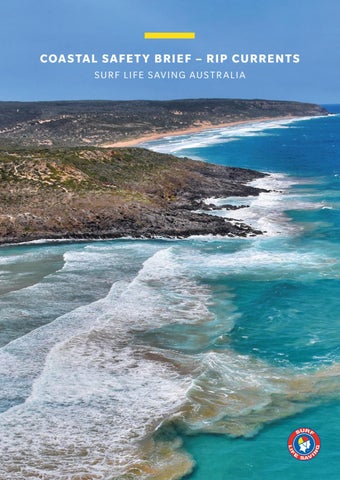 ANALYSIS On average 19 people drown per year as a result of rip currents in Australia. It’s the highest number of deaths for an individual hazard or activity.

Rip currents are the number one hazard at the Australian coast and there are more than 17,000 rips in Australia on any given day. A rip current is a narrow seaward flowing current of water moving through the surf zone. Rip currents are a significant contributor to coastal drowning deaths and account for more deaths per year than sharks, floods and cyclones combined1. The Surf Life Saving Australia National Coastal Safety Survey 20182 revealed that there are 10 million Australian adults who go swimming and wading at the coast, and 3.5 million are frequent participants. Furthermore, 25% of swimmers say they have been caught in a rip unintentionally. There were 262 rip-current-related drowning deaths between 2004â&#x20AC;&#x201C;18 on the Australian coast, which is an average of 19 per year3. Most of these deaths occurred while swimming or wading, predominantly at unpatrolled locations or at patrolled locations outside of patrol hours. Young males aged 15-39 are highly represented in the drowning statistics and are a key target group for rip-current-related interventions. This demographic comprises almost one third (35%) of coastal drowning deaths and represent more than half (51%) of rip current related fatalities. The Ipsos Social Research Institute Swimming and Wading Report 2016 highlighted that swimming at the beach is a core part of Australian culture. It is primarily about fun and relaxation. As a result, swimmers typically do not feel that they need safety information and they do not seek it out. Communications regarding rip safety need to be pushed to swimmers and other coastal participants, and need to challenge their beliefs regarding beach safety. Surf Life Saving Australia has created a national rip current safety campaign that aims to increase awareness of the rip current hazard and influence risky behaviours, particularly in young men. The campaign was launched in 2016 and over a five-year period will deliver key messages and strategies for beachgoers to identify and avoid rip currents.

51% MORE THAN 1KM FROM A LIFESAVING SERVICE

OF KNOWN CASES WERE RESCUED BY A MEMBER OF THE PUBLIC

RESCUED BY Of known cases 45%

Member of the public

DEPTH AT TIME OF INCIDENT 2%

COULD TOUCH THE BOTTOM

*Of known times. This is under reporting nighttime deaths. They are usually not recorded until the morning and happen without witnesses. Time would be recorded as 'unknown' and as such not included in the analysis. 5% of cases happened at unknown times.

been caught in a Rip

AUSTRALIANS SAY THEY HAVE BEEN CAUGHT IN A RIP CURRENT UNINTENTIONALLY

I feel safe where I go

I am a good/confident swimmer

I don't go far in to the ocean

They are too crowded

There is no patrolled beach close to where I live

Not very or not at all hazardous

Other marine stinger creatures such as bluebottles

Not very or not at all hazardous

2016-2018 HOW LIKELY ARE BEACHGOERS TO RESCUE SOMEONE WHO IS CAUGHT IN A RIP CURRENT?

2014-2018 HOW OFTEN DO SWIMMERS/WADERS LOOK FOR RIP CURRENTS BEFORE ENTERING THE WATER?

Are very unlikely to rescue someone from 40% a rip current

Always Most of the time Sometimes Never Can’t say

Depends upon the sea/water conditions

I am a good swimmer

I swim where other people swim

I know the beach well/I know where the rips are

No rips on my beach/where I go

Sometimes rips are hard to identify

I swim between the flags

I don't go far in the ocean

Don't know what to look for/can’t identify a rip

Not at all confident

2017-2018 RIP IDENTIFICATION OF BEACHGOERS THAT SAY THEY ARE CONFIDENT

WHEN TESTED, LESS THAN HALF OF THE BEACHGOERS WHO WERE CONFIDENT COULD CORRECTLY IDENTIFY A RIP 100% OF THE TIME.

COULD NOT IDENTIFY A RIP

Survey participants were asked to identify a rip in two different images. Of the people who said they were very or somewhat confident, less than half (47%) were correct in identifying the rip in both images. Almost one-third (32%) could identify the rip in one of the images and 21% were incorrect both times.

• Confidence in their swimming ability, based on: -- previous ‘education’ (including informal guidance from parents) -- a lifetime of experience in the water (despite varied levels) -- surfing experience and ability -- feel safe within the flags, or even just near them, if the lifeguards or lifesavers can see them, or if they are still standing or not going too far out • Many lack clarity regarding rip identification and different escape options (especially without assistance) • Some (e.g. recent migrants) lack detailed understanding of the risks of swimming in the ocean, especially what rips really are and how they work, and the importance of swimming between the flags

55% don’t always look for the presence of rips Physical

4 million Australians have been caught in a rip current unintentionally

OPPORTUNITY (Factors outside the individual) Physical

• Swimming competence affects level of caution taken and perceived risk • Limited actual experience, and (where tested recently) varied ability, in escaping a rip or treading water in difficult conditions • Desire to relax and have fun makes it harder for ‘safety’ messaging to appeal to or cut through to the target audience • Many assume they are safe enough if others are swimming nearby • Some prefer non-flag areas or unpatrolled beaches for a number of reasons, including: convenience, space and quiet • Behaviour is limited by certain attitudes (e.g. I am experienced, I am already aware of the rules/recommendations, and I can judge a safe spot)

• There is a strong norm to swim between the flags, for most (although not for some more experienced surfers/swimmers) • Some follow their more experienced friends (e.g. in deciding whether it’s safe enough to go in, or when they swim further out) • Friends aren’t necessarily trusted or seen as experts on rips or ocean survival • Lifeguards/lifesavers are an important source of advice, in situ

HOW DO WE TALK WITH THEM?4

The least confident or least experienced swimmers (including recent migrants)

This group tends to be reasonably cautious, once or if they are aware of the risks

Early awareness is critical among this group. They are relatively easily targeted as they are open to new information

Everyone in the middle

This group think they know enough and are doing enough, but this is not necessarily the case

Communications need to challenge this belief and show swimmers that they are not doing enough to be safe. If it is made clear enough to this group that they lack particular knowledge, they seem to listen

The most confident or experienced swimmers (including surfers)

This group takes more risks and is harder to convince to stay between the flags, as they think they are experienced enough not to need to. They are (or believe they are) better able to identify rips and (if caught) to escape

ONCE YOU ARE EXPERIENCED ENOUGH, YOU KNOW HOW TO GET OUT.

I KNOW THERE IS DANGER, BUT I DON’T REALLY THINK ABOUT IT.

IF IT LOOKS CALM, I’LL BE HAPPIER TO STAY AWAY FROM THE FLAGS.

I AM MORE WORRIED ABOUT BEING BITTEN THAN DROWNING. IN A LARGE SWELL I KNOW I CAN SWIM OUT, BUT I CAN’T FIGHT OFF A SHARK. Born overseas, male, 18–24 years old

• Take awareness and changed perception to give clear directive of new behaviour that’s catchy and memorable. • Encourage consideration of beach conditions and rip current identification. • Stop. Look. Make a safe plan. • Continue messaging around swimming at patrolled beaches and between the red and yellow flags. • Harder hitting message to impact on behaviour change.

The first two years of the campaign targeted rip current awareness by addressing common myths and facts. The campaign challenged beachgoer beliefs and confidence related to rips and encouraged them to learn how to identify and escape rip currents.

Years three to five will launch in December 2018 and aims to influence the behaviours of beachgoers, by urging them to always check for rips before entering the water. The second phase of the campaign will continue to target young men as well as the wider community by asking them to:

STOP to check for rips. LOOK for other dangers. PLAN how to stay safe.

Draw the line on Rips.

Awareness Campaign Outcomes: 1. Increase of 12% in people who can correctly identify a rip 2. Decrease in over-confidence in rip identification from 43% to 39% 3. Increase of 6% for hazard perception of coastal swimming

Stop. Look. Plan. Thousands of people are caught in rips every year, and too many of them drown. Before you cross the line, STOP to check for rips. LOOK for other dangers. PLAN how to stay safe.

Draw the line at beachsafe.org.au

swimming attitudes and behaviours, risk perceptions and strategies, rip current identification and safety, information needs and sources, and interventions. The qualitative research also explored reactions to specific campaign concepts, and the qualitative findings helped to shape the subsequent questionnaire used in the quantitative component. The quantitative research phase was carried out from 6-27 November 2015. This component comprised an online survey of n=1,094 swimmers and waders, followed by comprehensive analysis of the data. Given the geographic spread of the Australian coastline, Ipsos SRI used a representative sample of Australian swimmers and waders, involving the application of non-interlocking quotas according to the following demographic characteristics: gender, age, state, and area. Weighting was then applied to the sample to ensure the representativeness of the data was maintained. Data illustrated in figures may not always add up to 100% due to rounding. References R. Brander, D. Dominey-Howes, C. Champion, O. Del Vecchio, and B. Brighton (2013): “Brief Communication: A new perspective on the Australian rip current hazard” Natural Hazards and Earth System Sciences 13, 1687–1690, 2013. Ipsos Social Research Institute (2016) Swimming and Wading Report 2016. Ipsos: Sydney

Data correct at 24 July 2018. Changes may occur at a later date. © 2018 Surf Life Saving Australia This publication is copyright. Except as expressly provided in the Copyright Act 1968 and the Copyright Amendment Act 2006, no part of this publication may be reproduced, stored in any retrieval systems or transmitted by any means (including electronic, mechanical, microcopying, photocopying, recording or otherwise) without prior permission from Surf Life Saving Australia. For enquiries concerning reproduction, contact SLSA on: phone 02 9215 8000; email: info@slsa.asn.au Every attempt has been made to trace and acknowledge copyright, but in some cases this may not have been possible. Surf Life Saving Australia apologises for any accidental infringements and would welcome any information to redress the situation. Acknowledgements Surf Life Saving Australia wishes to thank Frederic Anne (Omnipoll) and Anika Martin (Graphic Design) for their contribution to this report. 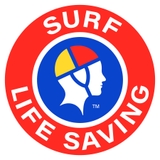