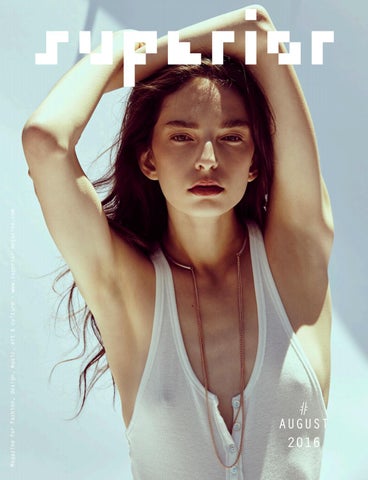 ...and meet creative people from the scenes of fashion, design, lifestyle, art & culture

Dear readers, It’s summer time and a lot of people are on vacation. Nevertheless we are presenting our SUPERIOR MAGAZINE August issue. As a review on Berlin Fashion Week read our articles about GREENSHOWROOM & ETHICAL FASHION SHOW BERLIN and DER BERLINER MODE SALON. We also present the designer WATARU TOMINAGA whom we met after his show at MERCEDES-BENZ FASHION WEEK BERLIN. All articles come along with a lot of photos we took during Berlin Fashion Week. Our fashion editorials come this time from ARYA SHIRAZI, HÜSNE AFSAR and R. PERRY FLOWERS.

Each season, ELLE collaborates with MercedesBenz Fashion Week Berlin to present one of the industry’s newest talents. This season, young Japanese designer WATARU TOMINAGA was selected, after winning the “Première Vision Grand Prix” at Hyères Festival.

After studying Applied Art in Textile at Tokyo’s Musashino Art University, Wataru Tominaga then moved to London to study Fashion Print at the prestigious Central Saint Martins. It is there that he developed the collection that got him the most significant reward from Hyères, which he then showed at the Mercedes-Benz tent in Berlin. For SUPERIOR MAGAZINE Tom Felber met Wataru Tominaga in the Mercedes-Benz VIP Lounge after his fashion show.

# Wataru Tominaga, thank you for meeting us. What kind of feeling emerged from presenting at the Mercedes-Benz Fashion Week Berlin? Because it was my first show, I was a bit nervous about doing the show. But I had a lot of support and help from my press company and Mercedes-Benz, so it was all fine.

# How did you feel after the show when everybody was giving you that big applause and the reactions to the show were so good? I didn’t get much of the reactions yet, but I think they were quite good. And I hope everyone enjoyed the show. # Have you ever been to Berlin before? I actually have been here many times, I can’t even remember how often. I do have a lot of friends living in Berlin, who I have visited many times. And I have been working for a fashion brand here for the last three months as well.

# And how do you like the city? I really like the city because of its many young artists and creative people. And what I find very interesting is that there is a lot of unisex fashion at the Fashion Week Berlin and an interesting audience as well. # You were born in Japan but studied in the UK. How come did you decide to study in London? Well, when I was little I was reading this one comic book, which was about a guy who went to study fashion design in London. I really liked the story and enjoyed drafting fashion. Since then, I wanted to become a designer one day. London is a very creative city so I just decided that I want to go there. # How old were you when you moved to London? I wasnâ&#x20AC;&#x2122;t that young anymore because I studied textile design in Japan first. By the time I actually moved to London I was 23 years old.

# Do you still live in London? Yes, right now I am living in London. Because I am planning some collaborations with French brands I will possibly move to Paris soon, but I donâ&#x20AC;&#x2122;t have any long-term plans.

# Where do you get the inspiration for your designs from? Basically from everywhere, but I am somehow influenced by fashionâ&#x20AC;&#x2122;s own history. Rather than art or paintings, looking at the developments in fashion, different materials and styles; working with them to create new mixtures and styles is what inspires me most. # So you like to play with different materials and styles? Yes, I like to mix it up.

# Today at your fashion show we saw a firework of colours. Can you tell us a bit about the new collection? As I mentioned I am very interested in different materials and colours. In London I studied fashion and prints, so I decided to add some more materials and to use them and bright colours together with different techniques to create men’s and women’s wear. My initial idea was to unify the male and female wardrobe to make them into one collection. # Do you prefer colourful and bright designs over monochromic and dark looks? I like colourful things in general, as I think colours make people happier and encourage them to celebrate their lives. I personally don’t see the need for monochrome things. Why don’t we go for the maximum in fashion and in our lives?

# What happened after you won the “Première Vision Grand Prix” at Hyères Festival? A lot of things happened. For example, I was invited to do this fashion show. And I’m looking forward to collaborations with Petit Bateau or Chanel’s Métiers d’Art within the next time.

# When will we see your next collection? Next year I hope.

Thank you very much for the interview.

Supported by the Fashion Council Germany, DER BERLINER MODE SALON promotes made-inGermany fashion to the global market. Christiane Arp, editor-in-chief of German Vogue and president of the Fashion Council Germany, and Marcus Kurz, managing director of creative agency NOWADAYS, are behind this initiative as they have recognized the need for such an event. They felt German designers needed a platform to present their artistry and extend their customer audience. The Kronprinzenpalais’ royal walls and garden were chosen to host this prestigious event. In a group exhibition, 40 designers were carefully selected to exhibit the best of their spring/summer 2017 collections. Among them, some of German fashion’s icons such as Augustin Teboul, Dawid Tomaszewski, Marina Hoermanseder, Malaikaraiss, ODEEH and Vladimir Karaleev but also labels like 22/4 Hommes Femmes, Brachmann, FELDER FELDER and Unützer who participated in the group exhibition for the first time. With a range of materials from cashmere (Allude who returned to their classic black cashmere sweater No. 11100, “simply perfect”, Iris Von Arnim or Antonia Zander), silk, to vegetable-tanned leather (PB 0110’s signature), the Salon exhibited designers that could offer something to all fields of the international fashion market. Styles also differed from classical work wear to more trend oriented: Escada or Sminfinity both displayed high-end elegant classic clothing, while Augustin Teboul presented their typical rock but feminine looks. Once again, the unique Benu Berlin exhibited her monochrome

looks that consist of fringes and strings of fabrics, intertwined with each other to create dazzling pieces of art. This season’s highlights were Iris Von Arnim’s futuristic installation, ODEEH’s room where exclusive insight into their runway show previously held, with the inclusion of the catwalk’s model board, Talbot Runhof’s recreation of their atelier and 22/4 Hommes Femmes’ exceptional materials. The latter, presenting as part of Der Berliner Mode Salon for the first time, had a “Please use flash” sign as it would in fact enhance the label’s designs. 22/4 understood the importance of new technologies, as its mannequins had their face covered with iPads where visitors could watch their latest runway show in Paris, and its textiles changed colour when photographed with flash. On the Kronprinzenpalais’ top floor, this season again, the Vogue Salon completed the exhibition and gave the opportunity to emerging German designers to exhibit their newfound talent to national and international press. 10 designers not only presented garments, but also fashionable lifestyle accessories: room perfumes, makeup accessories and vases. The Fashion Council Germany, also sponsoring this Salon, hopes that these new German designers could develop this market to a further extent. They have thus started a mentoring program via the Council, with which they coach emerging German designers and present them as artists to look out for. In September 2015, two designers benefitted from

this mentoring program: Marina Hoermanseder and Nobi Talai. Having received advice in their creative, production and marketing fields, the designers have presented their Autumn/Winter 2016 and Spring/Summer 2017 collections in January and June as part of the Vogue Salon’s group exhibition. Both designers brought innovation to their designs: Nobi Talaei by mixing what appear to be simple silhouettes with complicated drapes and folds, while dealing with the complex subject of ethnical blend, and Marina Hoermanseder’s signature orthopedic elements mixed with high fashion, which already gave her an icon status. DER BERLINER MODE SALON now constitutes a key destination during Berlin’s biannual fashion weeks. High-end German designers are each season carefully selected to offer the Salon’s visitors the best of made-in-Germany fashion. Luxury and forward thinking are fundamental in order to export German fashion abroad and have it significantly part of international fashion.

These fairs have in fact the aim to prove that sustainable fashion can be high end, luxurious fashion where trends and style meet quality and good ethics. â&#x20AC;&#x153;At GREENSHOWROOM and ETHICAL FASHION SHOW BERLIN, which is taking place for the tenth time, we welcome the trendiest ecofashion brands and exciting newcomersâ&#x20AC;?, said Olaf Schmidt, Vice President Textiles & Textile Technologies at Messe Frankfurt. With brands from 30 different countries, from Japan to Sweden, this fairs demonstrated the greater concern from more and more countries to produce good fashion that respects the environment.

A highlight was LVMH CSR Young Talent Award winner CAMILLE BOILLET, who sent a model in a wheelchair down the runway, as a tribute to disabled brides who can still wear their dream wedding dress. The young designer reflects a lot on dressing everyone, no matter their differences, and hence giving the chance to all to wear sustainable fashion. The Salonshow indeed sought out to be different and mark our minds, as LANIUS x WELEDAâ&#x20AC;&#x2122;s models came out dancing and throwing flowers on the audience, or another way to experience the runway show.

Another highlight in the fair’s installations was Portuguese label NAJHA, whose cork shoes, bags and even trousers were breathtaking. Although cork is commonly used in accessories for its isolating qualities, NAJHA’s were skillfully put together to give an outstanding result. Also, Studio ELSIEN GRINGHUIS caught the eye with an arty lookbook very much in this season’s style and hence illustrating perfectly the idea that ethical fashion can be stylish.

After the Green fairs’ good results, Olaf Schmidt, Vice President Textiles & Textile Technologies at Messe Frankfurt explained that “The fashion industry understands the importance of sustainability as a dominant theme and takes our trade fairs as a fixed element of Berlin Fashion Week.” This is why these showrooms have become a key destination during fashion week, not only nationally but also renowned worldwide. Berlin can now be considered as a leader in sustainable fashion, presenting stylish and luxurious ethical garments – a model to follow. 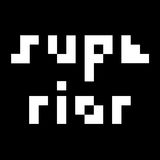 Exclusive articles related to BERLIN FASHION WEEK and FASHION EDITORIALS from across the world | SUPERIOR is an international MAGAZINE featu...

Exclusive articles related to BERLIN FASHION WEEK and FASHION EDITORIALS from across the world | SUPERIOR is an international MAGAZINE featu...