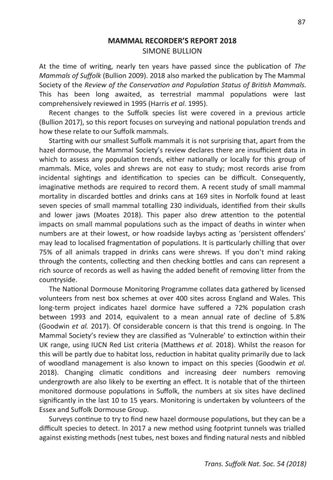 MAMMAL RECORDER’S REPORT 2018 SIMONE BULLION At the time of writing, nearly ten years have passed since the publication of The Mammals of Suffolk (Bullion 2009). 2018 also marked the publication by The Mammal Society of the Review of the Conservation and Population Status of British Mammals. This has been long awaited, as terrestrial mammal populations were last comprehensively reviewed in 1995 (Harris et al. 1995). Recent changes to the Suffolk species list were covered in a previous article (Bullion 2017), so this report focuses on surveying and national population trends and how these relate to our Suffolk mammals. Starting with our smallest Suffolk mammals it is not surprising that, apart from the hazel dormouse, the Mammal Society’s review declares there are insufficient data in which to assess any population trends, either nationally or locally for this group of mammals. Mice, voles and shrews are not easy to study; most records arise from incidental sightings and identification to species can be difficult. Consequently, imaginative methods are required to record them. A recent study of small mammal mortality in discarded bottles and drinks cans at 169 sites in Norfolk found at least seven species of small mammal totalling 230 individuals, identified from their skulls and lower jaws (Moates 2018). This paper also drew attention to the potential impacts on small mammal populations such as the impact of deaths in winter when numbers are at their lowest, or how roadside laybys acting as ‘persistent offenders’ may lead to localised fragmentation of populations. It is particularly chilling that over 75% of all animals trapped in drinks cans were shrews. If you don’t mind raking through the contents, collecting and then checking bottles and cans can represent a rich source of records as well as having the added benefit of removing litter from the countryside. The National Dormouse Monitoring Programme collates data gathered by licensed volunteers from nest box schemes at over 400 sites across England and Wales. This long-term project indicates hazel dormice have suffered a 72% population crash between 1993 and 2014, equivalent to a mean annual rate of decline of 5.8% (Goodwin et al. 2017). Of considerable concern is that this trend is ongoing. In The Mammal Society’s review they are classified as ‘Vulnerable’ to extinction within their UK range, using IUCN Red List criteria (Matthews et al. 2018). Whilst the reason for this will be partly due to habitat loss, reduction in habitat quality primarily due to lack of woodland management is also known to impact on this species (Goodwin et al. 2018). Changing climatic conditions and increasing deer numbers removing undergrowth are also likely to be exerting an effect. It is notable that of the thirteen monitored dormouse populations in Suffolk, the numbers at six sites have declined significantly in the last 10 to 15 years. Monitoring is undertaken by volunteers of the Essex and Suffolk Dormouse Group. Surveys continue to try to find new hazel dormouse populations, but they can be a difficult species to detect. In 2017 a new method using footprint tunnels was trialled against existing methods (nest tubes, nest boxes and finding natural nests and nibbled Trans. Suffolk Nat. Soc. 54 (2018)

hazel nuts). Footprint tunnels were found to be considerably more sensitive at detecting dormice in hedgerows and scrub and equally good in closed-canopy woodlands (Bullion et al. 2018). In 2018, thanks to an SNS bursary, footprint tunnels were deployed at six new locations containing suitable habitat where dormice could be present. No new records were achieved, but we are continuing the loan of equipment in 2019, so we would encourage anyone interested in taking part to get in touch. Although the National Bat Monitoring Programme and other field surveys provide useful data on relative changes in population size, The Mammal Society review indicates it is still not possible to reliably assess the population trends for most bats and that much more research is needed. Members of Suffolk Bat Group make significant contributions here. They continue to undertake valuable distribution surveys and their long-term monitoring of bat boxes and hibernation sites are important datasets. Hedgehogs were already becoming a less familiar sight when The Mammals of Suffolk was first published, but the latest research indicates that their UK populations have probably declined by at least a third since the millennium and using IUCN Red List criteria they are classified as ‘Vulnerable’. Rural hedgehog populations are declining more rapidly than urban ones (Wilson & Wembridge 2018). Since 2016, there has been a Suffolk Wildlife Trust Hedgehog Officer (funded for two years by Heritage Lottery Fund and British Hedgehog Preservation Society), who is working to reverse the decline of hedgehogs in Ipswich. As well as extensive community engagement, the project collaborated with Nottingham Trent University to help trial new methods for estimating hedgehog population densities in two different parts of the town. One of the study areas was located in a part of the town with primarily Victorian and Edwardian terraces with no greenspace, yet a surprising number of hedgehogs was found to be present. Whilst hedgehogs are naturally nocturnal, they were not detected on the nightly transects until after midnight and more frequently after 01:00, some four or five hours after sunset. This behaviour may help reduce the risk of hedgehog road deaths, but it also resulted in surveys taking place much later each night (or earlier each morning!) than originally anticipated. The decline of the once familiar water vole was highlighted through the National Water Vole Survey 1996-1998 (Strachan et al. 2000), which reported that water vole numbers had declined by 78% and there is thought to have been a further 50% decrease in numbers between 1998 and 2016 (Matthews et al. 2018). They are now considered as Endangered in England, Near Threatened in Scotland and Critically Endangered in Wales. The principle threats remain the same: loss of suitable habitat and predation by the American mink. As in other parts of the UK, there is a coordinated programme of mink trapping across Suffolk and around 3000 mink are known to have been caught in the county since records started 16 years ago. In 2018, a Suffolk Wildlife Trust project was undertaken to evaluate the effectiveness of mink trapping on Suffolk’s water vole populations, funded by The People’s Trust for Endangered Species. 141 transects, each 500m long, were surveyed

every 3km recording all riparian species on the rivers Stour, Gipping, Deben, Alde, Ore, Lark and Thorpeness Hundred. Excluding the latter river because the sample size was very small, water vole occupancy ranged from 35% on the Rivers Alde and Ore to 62% on the River Deben, which was very encouraging. Unfortunately, evidence of mink, largely from their footprints, was recorded at 23 sites, with the Gipping having the greatest number of records (A. Looser pers. comm.). The findings of this work indicate that whilst Suffolk rivers still support water vole, if mink trapping effort were to be reduced in future, water vole populations are likely to further decline significantly. During the above study, otter were also recorded on all the rivers apart from the Thorpeness Hundred, with the greatest percentage occupancy on the rivers Stour, Gipping and Lark. The Suffolk Otter Group (part of the Suffolk Mammal Group) has been undertaking some fascinating research using trail cameras for recording and monitoring otter populations at a number of sites. The Group has also been investigating otter diet from analysis of their droppings (spraints) at different locations and during different seasons and are working towards producing a new spraint analysis guide. Polecat were once common and widespread across Britain, but 19th and early 20th Century game-keeping resulted in them becoming confined to a core population in Wales and its borders. A subsequent recovery in numbers and expansion of their range meant that in 2008, a polecat was recorded in Suffolk for the first time in about a hundred years. In the last ten years there have been multiple sightings across the county, largely from road deaths and whilst many of these are from stock derived from hybridisation with feral ferrets, others display more typical polecat features. The national population is believed to now be four times higher since 1995 (Matthews et al. 2018), but there is concern that their numbers could be negatively influenced due to ingesting rodenticides carried by their rat prey. Rabbit numbers are believed to be declining nationally, primarily due to viral disease epidemics and this too may affect polecat by reducing prey availability. Numbers of the other Suffolk lagomorph species, the brown hare, are considered to be stable at present, although in 2018 there were similar concerns about another potential disease outbreak in the county. However, this was never fully confirmed. The real winners in terms of population increases are deer. The population and range of all species have increased in the last 20 years, particularly for the two nonnative species found in Suffolk: Chinese water deer and Reeves’ muntjac. Whilst deer can have a beneficial effect in helping maintain habitat mosaics, at higher numbers all species can have a detrimental effect through browsing and grazing of vegetation. Consequently, it is now necessary to either control deer numbers or exclude them from the most sensitive areas. Pest control has led to the widespread eradication of black rat in Great Britain and they are described it as ‘critically endangered, possibly extinct’ (Matthews et al. 2018). However, this species, also known as the ‘roof rat’ for its climbing ability, can be difficult to eradicate. A population at the Ipswich Docks was first recorded in 2014