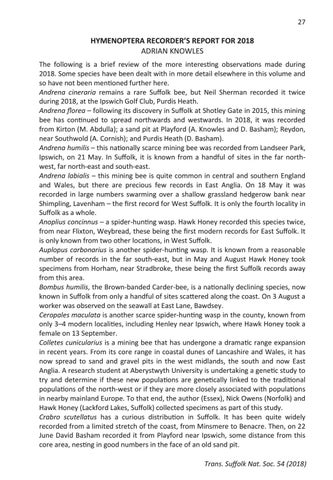 HYMENOPTERA RECORDER’S REPORT FOR 2018 ADRIAN KNOWLES The following is a brief review of the more interesting observations made during 2018. Some species have been dealt with in more detail elsewhere in this volume and so have not been mentioned further here. Andrena cineraria remains a rare Suffolk bee, but Neil Sherman recorded it twice during 2018, at the Ipswich Golf Club, Purdis Heath. Andrena florea – following its discovery in Suffolk at Shotley Gate in 2015, this mining bee has continued to spread northwards and westwards. In 2018, it was recorded from Kirton (M. Abdulla); a sand pit at Playford (A. Knowles and D. Basham); Reydon, near Southwold (A. Cornish); and Purdis Heath (D. Basham). Andrena humilis – this nationally scarce mining bee was recorded from Landseer Park, Ipswich, on 21 May. In Suffolk, it is known from a handful of sites in the far northwest, far north-east and south-east. Andrena labialis – this mining bee is quite common in central and southern England and Wales, but there are precious few records in East Anglia. On 18 May it was recorded in large numbers swarming over a shallow grassland hedgerow bank near Shimpling, Lavenham – the first record for West Suffolk. It is only the fourth locality in Suffolk as a whole. Anoplius concinnus – a spider-hunting wasp. Hawk Honey recorded this species twice, from near Flixton, Weybread, these being the first modern records for East Suffolk. It is only known from two other locations, in West Suffolk. Auplopus carbonarius is another spider-hunting wasp. It is known from a reasonable number of records in the far south-east, but in May and August Hawk Honey took specimens from Horham, near Stradbroke, these being the first Suffolk records away from this area. Bombus humilis, the Brown-banded Carder-bee, is a nationally declining species, now known in Suffolk from only a handful of sites scattered along the coast. On 3 August a worker was observed on the seawall at East Lane, Bawdsey. Ceropales maculata is another scarce spider-hunting wasp in the county, known from only 3–4 modern localities, including Henley near Ipswich, where Hawk Honey took a female on 13 September. Colletes cunicularius is a mining bee that has undergone a dramatic range expansion in recent years. From its core range in coastal dunes of Lancashire and Wales, it has now spread to sand and gravel pits in the west midlands, the south and now East Anglia. A research student at Aberystwyth University is undertaking a genetic study to try and determine if these new populations are genetically linked to the traditional populations of the north-west or if they are more closely associated with populations in nearby mainland Europe. To that end, the author (Essex), Nick Owens (Norfolk) and Hawk Honey (Lackford Lakes, Suffolk) collected specimens as part of this study. Crabro scutellatus has a curious distribution in Suffolk. It has been quite widely recorded from a limited stretch of the coast, from Minsmere to Benacre. Then, on 22 June David Basham recorded it from Playford near Ipswich, some distance from this core area, nesting in good numbers in the face of an old sand pit. Trans. Suffolk Nat. Soc. 54 (2018)

Crossocerus binotatus is a small digger wasp. It is known from only three modern (i.e. post-Morley) records, the third being Hawk Honey’s capture at Lackford Lakes – a first for West Suffolk. Evagetes pectinipes – this nationally endangered (RDB1) spider-hunting wasp has recently undergone a significant range expansion in south-east England, reaching Suffolk by 2016. In 2018 it was recorded three times: Hawk Honey took specimens at Henley, near Ipswich, and Sutton Heath, whilst the author caught a female at Purdis Heath, also near Ipswich. Hylaeus pictipes is one of the smaller so-called yellow-faced bees and it is a scarce Suffolk species. On 25 June, Hawk Honey took two females from the Suffolk Wildlife Trust’s Lackford Lakes nature reserve. Lasioglossum pauperatum is a very small mining bee. It went unrecorded in Suffolk from 1899 until 2017, when it was seen at Flatford Mill. On 28 June, Hawk Honey caught a female at Horham near Stradbroke. Methocha articulata females are wingless and rather ant-like in appearance. There are scattered records along the Suffolk coast. On 1 June, Neil Sherman recorded a female from the Ipswich Golf Course at Purdis Farm. Nomada ferruginata is a cuckoo-bee, laying its eggs in the nests of the spring-time mining bee Andrena praecox. It is considered to be endangered nationally (RDB1) but there are some signs that it may be becoming a little easier to find. In Suffolk, it has been recorded three times in the last four years, most recently at Horham, Stradbroke, by Hawk Honey. Osmia bicolor is a solitary bee that nests in old snail shells and is therefore found widely across Breckland, where the base-rich soils favour snail abundance. On 18 May, the author took a female at Shimpling, near Lavenham, at the same location as the Andrena labialis mentioned above. This is only the second Suffolk record away from the Breckland grasslands that it favours. Pseudomalus auratus is a small, brightly coloured ruby-tailed wasp or cuckoo-wasp (Plate 4). Following a capture at Horham by Hawk honey, it is now known from three modern county records, with David Basham finding a dead specimen in a house at Valley Close, Ipswich in 2017. Stelis phaeoptera – this cuckoo-bee was recorded in East Suffolk for the first time, when Alan Cornish recorded it from his garden at Reydon, near Southwold. Stelis punctulatissima – this cuckoo-bee was recorded in East Suffolk for the first time, when Alan Cornish recorded it from his garden at Reydon, near Southwold. Symmorphus connexus is one of the potter/mason wasps. It was recorded by the author from Lackford Lakes on 25 June, this being only the second recent record of this species in Suffolk. Adrian Knowles Jessups Cottage London Road Capel St Mary IP9 2JR