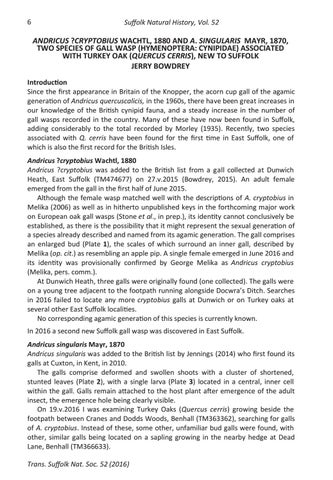 ANDRICUS ?CRYPTOBIUS WACHTL, 1880 AND A. SINGULARIS MAYR, 1870, TWO SPECIES OF GALL WASP (HYMENOPTERA: CYNIPIDAE) ASSOCIATED WITH TURKEY OAK (QUERCUS CERRIS), NEW TO SUFFOLK JERRY BOWDREY Introduction Since the first appearance in Britain of the Knopper, the acorn cup gall of the agamic generation of Andricus quercuscalicis, in the 1960s, there have been great increases in our knowledge of the British cynipid fauna, and a steady increase in the number of gall wasps recorded in the country. Many of these have now been found in Suffolk, adding considerably to the total recorded by Morley (1935). Recently, two species associated with Q. cerris have been found for the first time in East Suffolk, one of which is also the first record for the British Isles. Andricus ?cryptobius Wachtl, 1880 Andricus ?cryptobius was added to the British list from a gall collected at Dunwich Heath, East Suffolk (TM474677) on 27.v.2015 (Bowdrey, 2015). An adult female emerged from the gall in the first half of June 2015. Although the female wasp matched well with the descriptions of A. cryptobius in Melika (2006) as well as in hitherto unpublished keys in the forthcoming major work on European oak gall wasps (Stone et al., in prep.), its identity cannot conclusively be established, as there is the possibility that it might represent the sexual generation of a species already described and named from its agamic generation. The gall comprises an enlarged bud (Plate 1), the scales of which surround an inner gall, described by Melika (op. cit.) as resembling an apple pip. A single female emerged in June 2016 and its identity was provisionally confirmed by George Melika as Andricus cryptobius (Melika, pers. comm.). At Dunwich Heath, three galls were originally found (one collected). The galls were on a young tree adjacent to the footpath running alongside Docwraâ&#x20AC;&#x2122;s Ditch. Searches in 2016 failed to locate any more cryptobius galls at Dunwich or on Turkey oaks at several other East Suffolk localities. No corresponding agamic generation of this species is currently known.

In 2016 a second new Suffolk gall wasp was discovered in East Suffolk. Andricus singularis Mayr, 1870 Andricus singularis was added to the British list by Jennings (2014) who first found its galls at Cuxton, in Kent, in 2010. The galls comprise deformed and swollen shoots with a cluster of shortened, stunted leaves (Plate 2), with a single larva (Plate 3) located in a central, inner cell within the gall. Galls remain attached to the host plant after emergence of the adult insect, the emergence hole being clearly visible. On 19.v.2016 I was examining Turkey Oaks (Quercus cerris) growing beside the footpath between Cranes and Dodds Woods, Benhall (TM363362), searching for galls of A. cryptobius. Instead of these, some other, unfamiliar bud galls were found, with other, similar galls being located on a sapling growing in the nearby hedge at Dead Lane, Benhall (TM366633). Trans. Suffolk Nat. Soc. 52 (2016)

Samples of the galls were collected and in a few days produced both male and female (Plate 4) adults, which were identified using Melika (2006) as Andricus singularis. The identity of the gall was confirmed by Malcolm Jennings from a digital image. These records represent the first occurrence of A. singularis in Suffolk and the first British occurrence outside of Kent. Discussion Quercus cerris is not native to Britain, being a native to Southern Europe where it survived the Ice Ages in glacial refugia. It was first introduced to Britain as an ornamental in the C18th (Mitchell, 1979). Since then it has been planted widely (see Sanford & Fisk (2010) for the Suffolk distribution and status of Q. cerris). The late C20th and early C21st have seen many new gall wasps which have arrived in Britain from Continental Europe. Of these, most of the oak gallers have two separate generations alternating between Quercus robur, Q. petraea and their hybrid and Q. cerris (e.g. Andricus aries, A. gemmeus, A. quercuscalicis) or, with both generations associated with Q. cerris (e.g. Pseudoneuroterus saliens). There is good evidence that these species, together with several others, have apparently colonised naturally by migration from the Continent, their westerly progress having been monitored across Europe, although in some instances, accidental, human facilitated introduction cannot be entirely ruled out. The widespread distribution of Q. cerris in Britain has meant that these gall wasps have been able to establish populations outside of their natural range and the natural range of their host tree. The majority of oak cynipids (Cynipini) have alternating sexual and asexual generations. The life cycle is said to have been closed when both generations are known and proved experimentally. No oak gall wasps are currently known that have a life cycle comprised solely of a sexual generation (Stone et al. 2008), implying that both A. cryptobius and A. singularis must have alternate, asexual generations, either currently unrecognised, or already known but not, as yet, linked to these two sexual generations. As the European oak galls are relatively well known, it is probable that the asexual galls of A. cryptobius and A. singularis might be cryptic and therefore easily overlooked. Captive breeding might provide a route to discover the alternate generations of these gall wasps, but to induce the formation of galls experimentally is not easy, as conditions have to be suitable for mating to occur and the correct host plant, at the right stage and with the appropriate plant organ (e.g. catkin, acorn), must be present. The situation is further complicated by the fact that recent DNA studies of adult gall wasps do not always support the species concepts as understood from morphological characters used in identification keys. Acknowledgements I would like to thank Dr George Melika and Malcolm Jennings for their assistance with determining the identities of the galls and gall wasps described above and staff at National Trust, Dunwich Heath for their assistance and for permission to collect invertebrates. Trans. Suffolk Nat. Soc. 52 (2016)