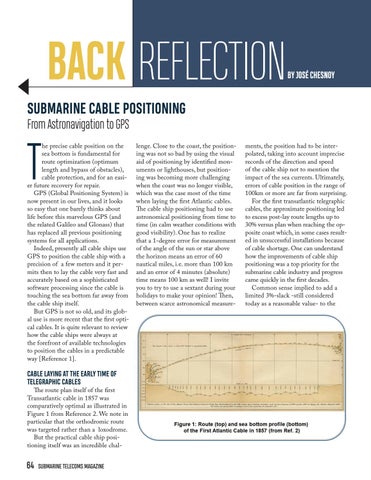 he precise cable position on the sea bottom is fundamental for route optimization (optimum length and bypass of obstacles), cable protection, and for an easier future recovery for repair. GPS (Global Positioning System) is now present in our lives, and it looks so easy that one barely thinks about life before this marvelous GPS (and the related Galileo and Glonass) that has replaced all previous positioning systems for all applications. Indeed, presently all cable ships use GPS to position the cable ship with a precision of a few meters and it permits then to lay the cable very fast and accurately based on a sophisticated software processing since the cable is touching the sea bottom far away from the cable ship itself. But GPS is not so old, and its global use is more recent that the first optical cables. It is quite relevant to review how the cable ships were always at the forefront of available technologies to position the cables in a predictable way [Reference 1].

CABLE LAYING AT THE EARLY TIME OF TELEGRAPHIC CABLES

The route plan itself of the first Transatlantic cable in 1857 was comparatively optimal as illustrated in Figure 1 from Reference 2. We note in particular that the orthodromic route was targeted rather than a loxodrome. But the practical cable ship positioning itself was an incredible chal-

lenge. Close to the coast, the positioning was not so bad by using the visual aid of positioning by identified monuments or lighthouses, but positioning was becoming more challenging when the coast was no longer visible, which was the case most of the time when laying the first Atlantic cables. The cable ship positioning had to use astronomical positioning from time to time (in calm weather conditions with good visibility). One has to realize that a 1-degree error for measurement of the angle of the sun or star above the horizon means an error of 60 nautical miles, i.e. more than 100 km and an error of 4 minutes (absolute) time means 100 km as well! I invite you to try to use a sextant during your holidays to make your opinion! Then, between scarce astronomical measure-

ments, the position had to be interpolated, taking into account imprecise records of the direction and speed of the cable ship not to mention the impact of the sea currents. Ultimately, errors of cable position in the range of 100km or more are far from surprising. For the first transatlantic telegraphic cables, the approximate positioning led to excess post-lay route lengths up to 30% versus plan when reaching the opposite coast which, in some cases resulted in unsuccessful installations because of cable shortage. One can understand how the improvements of cable ship positioning was a top priority for the submarine cable industry and progress came quickly in the first decades. Common sense implied to add a limited 3%-slack -still considered today as a reasonable value- to the