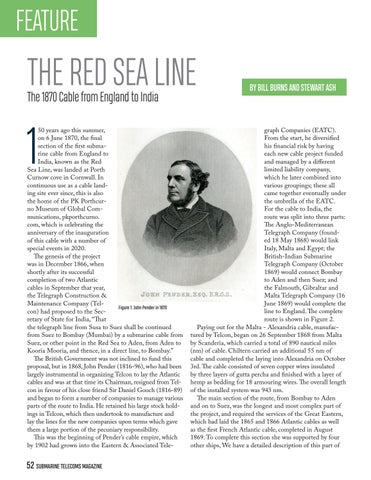 THE RED SEA LINE The 1870 Cable from England to India

50 years ago this summer, on 6 June 1870, the final section of the first submarine cable from England to India, known as the Red Sea Line, was landed at Porth Curnow cove in Cornwall. In continuous use as a cable landing site ever since, this is also the home of the PK Porthcurno Museum of Global Communications, pkporthcurno. com, which is celebrating the anniversary of the inauguration of this cable with a number of special events in 2020. The genesis of the project was in December 1866, when shortly after its successful completion of two Atlantic cables in September that year, the Telegraph Construction & Maintenance Company (TelFigure 1: John Pender in 1870 con) had proposed to the Secretary of State for India, “That the telegraph line from Susa to Suez shall be continued from Suez to Bombay (Mumbai) by a submarine cable from Suez, or other point in the Red Sea to Aden, from Aden to Kooria Mooria, and thence, in a direct line, to Bombay.” The British Government was not inclined to fund this proposal, but in 1868, John Pender (1816-96), who had been largely instrumental in organizing Telcon to lay the Atlantic cables and was at that time its Chairman, resigned from Telcon in favour of his close friend Sir Daniel Gooch (1816-89) and began to form a number of companies to manage various parts of the route to India. He retained his large stock holdings in Telcon, which then undertook to manufacture and lay the lines for the new companies upon terms which gave them a large portion of the pecuniary responsibility. This was the beginning of Pender’s cable empire, which by 1902 had grown into the Eastern & Associated Tele-

BY BILL BURNS AND STEWART ASH

graph Companies (EATC). From the start, he diversified his financial risk by having each new cable project funded and managed by a different limited liability company, which he later combined into various groupings; these all came together eventually under the umbrella of the EATC. For the cable to India, the route was split into three parts: The Anglo-Mediterranean Telegraph Company (founded 18 May 1868) would link Italy, Malta and Egypt; the British-Indian Submarine Telegraph Company (October 1869) would connect Bombay to Aden and then Suez; and the Falmouth, Gibraltar and Malta Telegraph Company (16 June 1869) would complete the line to England. The complete route is shown in Figure 2. Paying out for the Malta - Alexandria cable, manufactured by Telcon, began on 26 September 1868 from Malta by Scanderia, which carried a total of 890 nautical miles (nm) of cable. Chiltern carried an additional 55 nm of cable and completed the laying into Alexandria on October 3rd. The cable consisted of seven copper wires insulated by three layers of gutta percha and finished with a layer of hemp as bedding for 18 armouring wires. The overall length of the installed system was 943 nm. The main section of the route, from Bombay to Aden and on to Suez, was the longest and most complex part of the project, and required the services of the Great Eastern, which had laid the 1865 and 1866 Atlantic cables as well as the first French Atlantic cable, completed in August 1869. To complete this section she was supported by four other ships, We have a detailed description of this part of