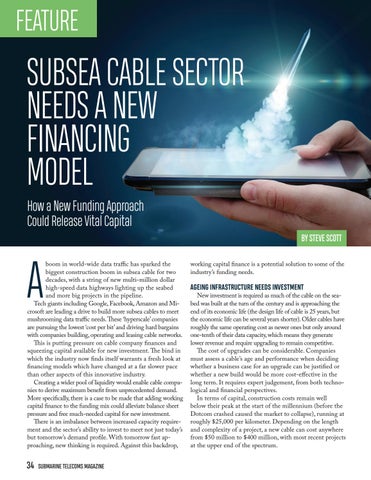 boom in world-wide data traffic has sparked the biggest construction boom in subsea cable for two decades, with a string of new multi-million dollar high-speed data highways lighting up the seabed and more big projects in the pipeline. Tech giants including Google, Facebook, Amazon and Microsoft are leading a drive to build more subsea cables to meet mushrooming data traffic needs. These ‘hyperscale’ companies are pursuing the lowest ‘cost per bit’ and driving hard bargains with companies building, operating and leasing cable networks. This is putting pressure on cable company finances and squeezing capital available for new investment. The bind in which the industry now finds itself warrants a fresh look at financing models which have changed at a far slower pace than other aspects of this innovative industry. Creating a wider pool of liquidity would enable cable companies to derive maximum benefit from unprecedented demand. More specifically, there is a case to be made that adding working capital finance to the funding mix could alleviate balance sheet pressure and free much-needed capital for new investment. There is an imbalance between increased capacity requirement and the sector’s ability to invest to meet not just today’s but tomorrow’s demand profile. With tomorrow fast approaching, new thinking is required. Against this backdrop,

working capital finance is a potential solution to some of the industry’s funding needs.

New investment is required as much of the cable on the seabed was built at the turn of the century and is approaching the end of its economic life (the design life of cable is 25 years, but the economic life can be several years shorter). Older cables have roughly the same operating cost as newer ones but only around one-tenth of their data capacity, which means they generate lower revenue and require upgrading to remain competitive. The cost of upgrades can be considerable. Companies must assess a cable’s age and performance when deciding whether a business case for an upgrade can be justified or whether a new build would be more cost-effective in the long term. It requires expert judgement, from both technological and financial perspectives. In terms of capital, construction costs remain well below their peak at the start of the millennium (before the Dotcom crashed caused the market to collapse), running at roughly $25,000 per kilometer. Depending on the length and complexity of a project, a new cable can cost anywhere from $50 million to $400 million, with most recent projects at the upper end of the spectrum.