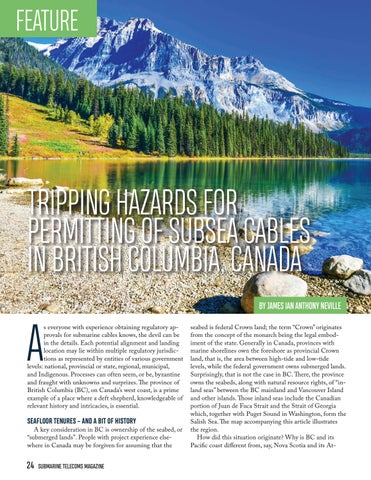 s everyone with experience obtaining regulatory approvals for submarine cables knows, the devil can be in the details. Each potential alignment and landing location may lie within multiple regulatory jurisdictions as represented by entities of various government levels: national, provincial or state, regional, municipal, and Indigenous. Processes can often seem, or be, byzantine and fraught with unknowns and surprizes. The province of British Columbia (BC), on Canada’s west coast, is a prime example of a place where a deft shepherd, knowledgeable of relevant history and intricacies, is essential.

SEAFLOOR TENURES – AND A BIT OF HISTORY

A key consideration in BC is ownership of the seabed, or “submerged lands”. People with project experience elsewhere in Canada may be forgiven for assuming that the

seabed is federal Crown land; the term “Crown” originates from the concept of the monarch being the legal embodiment of the state. Generally in Canada, provinces with marine shorelines own the foreshore as provincial Crown land, that is, the area between high-tide and low-tide levels, while the federal government owns submerged lands. Surprisingly, that is not the case in BC. There, the province owns the seabeds, along with natural resource rights, of “inland seas” between the BC mainland and Vancouver Island and other islands. Those inland seas include the Canadian portion of Juan de Fuca Strait and the Strait of Georgia which, together with Puget Sound in Washington, form the Salish Sea. The map accompanying this article illustrates the region. How did this situation originate? Why is BC and its Pacific coast different from, say, Nova Scotia and its At-