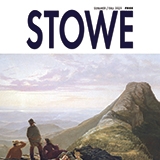 The Vermont Community Newspaper Group (VTCNG) is a media company based in the picturesque and bustling town of Stowe in the mountains of central Vermont.

The Stowe Reporter, part of VTCNG, has published the Stowe Guide & Magazine twice a year since the late 1960s. It started as a 4-by-9-inch visitors guide and phone directory for the Stowe community, and expanded to its current size in 1994.

Every year since 2010, the magazine has received first place honors at the New England Newspaper & Press Association’s Better Newspaper Competition in the niche publication category.

Green Mountain Weddings/Stowe Weddings has an annual circulation of 7,000. The magazine is mailed to select subscribers of the Stowe Reporter weekly newspaper, and has limited distribution at select Vermont welcome centers as well as direct distribution at bridal shops and suppliers, inns and resorts, clothing and jewelry shops, reception sites, local chambers of commerce, florists, bakeries and more.