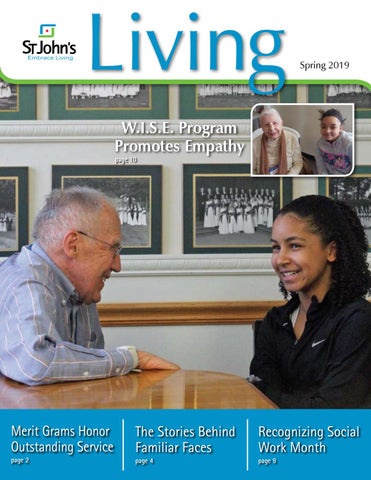 The Stories Behind Familiar Faces

Merit Grams: Recognition for Impactful Work Vision St. John’s will lead and inspire a shift in society’s views of elderhood by embracing and celebrating life’s experiences.

Hundreds of times over the past few years, St. John’s residents, their

family members, and even fellow team members have taken the opportunity to acknowledge an employee or group of employees for exemplary service. Most of these testimonials are communicated through the Merit Gram program, which provides anyone who is compelled to recognize an employee a formalized way to acknowledge a positive experience. To recognize a St. John’s staff member or a team of employees, you can receive a Merit Gram at the concierge desk of any St. John’s community or through St. John’s Work Life Department. Completed forms can be returned to the Work Life office at St. John’s Home. The following are just a few examples of recent Merit Grams we have received.

Celeste Mbuyee and Nesha Nixon We recently received a note from St. John&#39;s Meadows resident Jim Braker giving thanks for the care his wife received during a recent rehabilitation stint at St. John&#39;s Home. In addition to expressing &quot;thanks for the good care your team provided,&quot; the Brakers took time to acknowledge two particular members of the Dahlia neighborhood: &quot;Celestine Mbuyee, whose quiet, caring manner showed respect to a patient that was very reassuring and much appreciated. For her, this did not seem just a &#39;job&#39; but an opportunity to render a caring manner.&quot; Additionally, &quot;Nesha Nixon demonstrated a splendid combination of personal caring and overseeing and supervising the nursing staff while on shift. Amidst the whirlwind of responsibilities she was prompt to respond, demonstrating wisdom and respect for the patient.&quot;

Barbara Outerson and Yahaira Cisnero Brickstone resident Barbara Outterson recently wrote a glowing recommendation of an outstanding employee. “I would like to commend Yahaira Cisnero who has been providing housekeeping services for me for over one year,” Barbara writes. “Ms. Cisnero is prompt, reliable, thorough, and organized in her work. In addition, she thinks ahead and plans to include any project which needs doing. If I want her to add a task such as sweeping off the porch, she makes time to do it. Besides her work, she is a pleasant and cheerful presence in my home.” Barbara added.

Kenny Johnson It is not uncommon for one writer to pen Merit Grams in honor of multiple staff members. Thus was the case in February, when we received a handful of testimonials from Charles Jenkins—a family member of a resident living on the Lilac neighborhood at St. John’s Home. One of the employees Charles had great things to say about was shahbaz Kenny Johnson. He wrote: “Ken is courteous, helpful, (and) responsive to (resident’s) needs. He is a compassionate person. His outgoing, friendly personality is nice to see.”

There are times when we receive incredible, sweeping testimonials about the impact our work has on residents and those who are close to them. These notes reinforce the notion that St. John’s hires the most compassionate, caring people who rise to the occasion when helping others. Check out this touching tribute to St. John’s staff from the family of Carolyn Rosica:

wonderful stories chronicling the people who live, work, and volunteer at St. John’s. We find that the best way to describe just how great of a place St. John’s can be is to feature the people who make it such a vibrant community. Our “Faces of St. John’s” page tells the stories of dozens of people who continue to touch our lives. Here, you will find the story of Harriet Weiss, a recent recipient of rehabilitation services at St. John’s Home. You will learn about the special volunteer project that led to James Goldammer returning to St. John’s Meadows several years after his father—a former resident—passed away. You will meet Green House Home resident Carol Laniak, who says of her new surroundings: “I am really happy here. Just about everyone makes me feel at home.”

Take some time to get to know the incredible people that make St. John’s a truly unique place to be. See these great stories at stjohnsliving.org/story. Carol Laniak and son Mark

Five Star Improvements in Skilled Services St. John’s saw a significant, positive rise in clinical outcomes throughout 2018. The Center for Medicare and Medicaid Services (CMS) measure of “Quality of Resident Care” jumped from 3 to 5 stars. This rating takes in to account the outcomes from 31 clinical measures and the improvement speaks volumes about the standard of care achieved through the small homes model. The St. John’s Green House Homes in Penfield recently reached a 5-star overall CMS rating and was designated as a “Best Nursing Home” by US News and World Reports. Congratulations to all involved in the continuing clinical success! Learn more about the movement that is driving this success: stjohnsliving.org/small-homes-journey

t. John’s is grateful to all who contributed to St. John’s Foundation from August 1, 2018 through January 31, 2019. Your gifts support our vision of enhancing the lives of St. John’s residents through social programming, physical fitness activities, creative and recreational arts therapy, and spiritual programming. Donors who give a minimum of $500 per year to the Annual Fund are acknowledged as members of the Highland Park Society.

30th Annual Golf Tournament It is hard to believe that nearly three decades have passed since Ron Schroeder (pictured on right) served as chair for the first St. Johnâ&amp;#x20AC;&amp;#x2122;s Golf Tournament. The 30th edition of the tournament tees off on Monday, July 15 at Midvale Country Club. To get involved with this great event, contact Taylor Freitas, development manager, at 585-760-2464.

We strive to publish accurate recognitions and apologize for errors or omissions. To make a correction or a donation please call Taylor Freitas at 585-760-2464 or email tfreitas@stjohnsliving.org.

Celebrating Social Work Month Social workers and elder advocates play crucial roles in the success of St. John’s. They address the social and emotional needs of residents and their family members while connecting them with services and supports that help them thrive. During National Professional Social Work Month in March, we asked each of our compassionate professionals why they chose social work. To see their answers, visit stjohnsliving.org/swmonth.

New Learning Program Sparks Greater Empathy in Youth and Older Adults At first listen, the chatter sounds much like a

typical afternoon conversation in any sixth grade classroom in America. The discussions flow freely and it does not take long for the participants to find common ground. “Friendships are very important,” Gloria Stuhlmiller says to a student, who nods in agreement. “That’s what it’s all about.” As Gloria goes on, it becomes clear that this is more than just your average exchange between middle school students. “Friendships change, and sometimes you lose them. They get sick, they move away. It isn’t always easy.” The Harley School in Pittsford is not a typical grade school, which explains why Gloria and five of her fellow residents from St. John’s Meadows are circled up with seven sixth graders on this Tuesday afternoon in a second floor classroom. The six older adults are the second group to be invited to participate in W.I.S.E. (Working Together: Student/ Senior Intergenerational Exchange), a program that started at the Harley School this past fall.

Harley is known for developing collaborative educational opportunities for students to make their community a better place; including the awardwinning hospice course that nearly half of the school’s senior student population volunteers for each year.

Sybil Prince—a psychiatric social worker who joined the school in January 2018—developed and implemented W.I.S.E. as a way to give younger students a meaningful experience collaborating with older adults, while progressively setting and meeting goals based on their weekly interactions. “The idea is to help them (the students) become more aware of what it is like to be an older adult and to feel more comfortable conversing with them,” says Prince, who also oversees the hospice class through Harley’s Center for Mindfulness and Empathy Education. Each 10-week trimester gives students a unique opportunity to interview older adults from St. John’s. The goal is to give students a platform to allow them to better relate to and understand people from vastly different backgrounds. As Prince was creating the curriculum for W.I.S.E., she envisioned St. John’s as the potential source for participants in their seventies, eighties, and nineties. Her previous role working as a geriatric care manager around the Rochester community brought her to St. John’s regularly, where she noticed a unique spirit of cooperation. Prince worked closely with another social worker—Chantel Foster—now resident life director at St. John’s Meadows. According to Foster, this new program was uniquely aligned with the type of intergenerational programing St. John’s was already offering. “Sybil had hoped to bring about a collaboration with a senior community to deepen

mutual learning and understanding for the students,” says Foster. “I had been dreaming about new ways to partner with children in an intergenerational program.” Within a matter of weeks, the two social workers were planning for a fall launch. When Don Hornburg looks back at his career, he separates his work history into three parts. After being pushed into an early retirement after working in the science and business fields, Hornburg spent 17 years as substitute teacher with the Hilton School District. “I enjoyed the teaching the most,” he says, referencing his ability to share his own personal stories and relate to students. “Kids like something different, and I was a different kind of teacher.” As he takes the three-mile bus ride to the Harley School every week, Hornburg finds that he is once again able to influence the learning experience of students in a positive way. “We’re at an age where we aren’t as able to get around and do things as much as we once were,” Horburg says. He enthusiastically participates in W.I.S.E. and believes the benefits of the program flow both ways. “I’m enjoying these kids. I really get a lot of out of this. And I think it’s really beneficial for them to interact with us older people. So many young people don’t have their grandparents around.” W.I.S.E. fills a certain gap for the participating St. John’s residents as well. Several of these older adults report

that their own grandchildren and great-grandchildren are often spread across the country, giving them less time to spend with them. This meaningful activity gives them the opportunity to interact with this next generation of school children and maybe even provides greater sense of purpose in their lives. Prince cannot help but smile when she sees St. John’s residents walk through the school’s entryway. “I love the idea of bringing residents here—getting them out and having them come be a part of our school environment,” she says. However, she insists that St. John’s residents who travel to the Harley School every week are by no means passive contributors to a school project. “Everything the students do the elders do as well. They all help each other and learn from each other.”

Follow St. John’s in the News St. John’s residents, employees, and programs have been the focus of several news stories over the past few months. These features have garnered media attention through a variety of local news outlets as well as with national publications like McKnight’s Long-Term Care and LeadingAge Magazine. Check out stjohnsliving.org/in-the-news and catch up on all of the great stories!

Hawthorne Renovations Near Completion The past year has brought a world of change for the Hawthorne, including the granting of a license to provide enhanced assisted living services to residents needing a greater level of care. A series of resident-focused renovations will be completed this spring. To catch up on the progress of the Hawthorne modernization project, visit stjohnsliving.org/Hawthorne-renovations.

This semi-annual publication highlights news and feature stories across the St. John's spectrum of senior services. 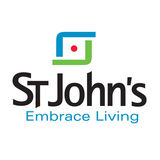