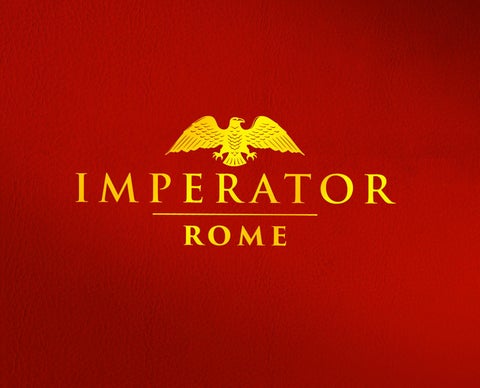 AVE, IMPERATOR FAN S As you read this book, it will be over twentyfive years since I began my career in the game-development industry. Iâ&#x20AC;&#x2122;ve worked as a programmer, game-designer, studiomanager and penultimately as the executive leader of multiple studios before ending up as a creative director on the studio I founded. In the autumn of 2017 it had been over four years since I worked on a game hands-on for a longer period of time - not since the development of EU4 had I been involved in the core architecture and design of a new title. Then, when I saw the development of our new tools and technologies, I just knew I had to make a game again. Not just as a director; I wanted to program it and design it as well. We had received requests from our fans to revisit the Roman era, and I felt that this era would be ideal for a new grand strategy game. One that could include characters, politics, pops, management, warfare, trade, religion and all other mechanics we have grown to love in PDS titles.

With a new Rome Game, I intended to create a Magnum Opus, the perfect grand strategy game, with a deep and detailed map. It was enormously ambitious, but the team we got together during the spring and summer turned out to perform amazingly, and announcing the game on stage at PDXCon 2018 was a great highlight. The biggest challenges we had was to make sure all the features we envisioned would fit together and be immersive enough. We worked very iteratively and some core features kept changing on a monthly basis until we were happy with them. Today, we have a game we are really happy with, and with the Paradox model, we will see the game grow deeper and better over the years, like a good wine!

Intro, Vision & Art Style pages 5-10 A strong Empire needs a solid foundation. In this chapter, we share our initial concepts and the vision behind Imperator: Rome.

Interface & Icons pages 11-30 A closer look at the interface. As your main tool in any GSG, weâ&#x20AC;&#x2122;ve striven to enrich it with beautiful details and artwork of the era.

Units, Buildings & Ships pages 59-94 A look at the cultures and nations of ancient history. Through research and development, weâ&#x20AC;&#x2122;ve brought these legendary nations back to life.

T h e World Map pages 95-116 Imperator: Rome features the most detailed and advanced world map ever in any Paradox game. Here, we take a closer look at the underlying mechanics.

Last Words & Reflections pages 117-120 A reflection on the great journey of making Imperator, and a look forward at things to come.

I. VISION AND ART STYLE

VISION In Imperator: Rome we return to the Roman era, to the time of the Roman Republic. The game spans from 304 BC to the start of the Imperial Era, covering Rome’s rise to power, as well as the wars of the Diadochi, the successors to Alexander the Great’s empire. Our vision centered around the concept of ‘glorious history’. Ancient history is a tale of states vying for power, tribes uprooting to move to richer lands and the rise of great empires. We wanted to have this concept of ‘glorious history’ refl cted in all aspects of the game: Music, Art, GUI, down to even interface sounds. In our game, players should experience the Roman era as a time of splendour and confli t, as they forge their chosen nation into a great empire of their own. Imperator: Rome asks a tintillating question - Will your name go down in the legends of history, or will your empire crumble and fade into the sands of time? Ave, Imperator!

Our vision was to keep the game focused on the aesthetic of a glorious future, since this is an age of states vying for power, tribes uprooting to move to rich lands and the rise of great rulers and empires.

ART STYLE When developing the art style for Imperator: Rome, we settled on a few pillars to guide our work. We wanted to represent the splendor of Rome, immersing the player in an aesthetic of the Hellenistic period with bright and warm colors and light. While being warm and bright, we wanted to avoid oversaturating the world. Marble, reliefs and the traditional red of the Roman Republic are elements we’ve worked into the UI and general feel of Imperator while playing. The goal from the beginning was to keep the visuals historically authentic, meaning that certain aspects that might read as typically Roman were still outside the scope of the era we’re depicting. A good example is the segmented plate armor the Romans are known for equipping, the so-called ‘lorica segmentata’. Th s armor is one of the most well -known visuals associated with the Romans and very prominent in most modern media, but only came into use during the Imperial era, rather than the Republican one. Thus, we chose to omit it from our game. Balancing the familiar artistic tropes of Romans in the mediawith our desire for historical fid lity was a key consideration when making I:R.

We chose an aesthetic that would represent the splendour of Rome. Bright, warm colours and light, punctuated with Roman crimson accents in the GUI and game. P. 8 | A R T B O O K |

HAN NIB AL IN TH E AL PS In one of the greatest feats of arms in the ancient world, Hannibal of Carthage took an army of over 40,000 men (with about 40 elephants) across an Alpine pass into Italy in 218 BC. In an effort to surprise the Roman army, Hannibal fought through Spain to the Rhone River and then asked his men to drag horses, supplies and elephants up an icy pass. His African and Spanish troops were unaccustomed to the cold, and estimates of Carthageâ&#x20AC;&#x2122;s casualties vary. Mere weeks after this strenuous action, Hannibal routed a Roman army at Trebia. His elephants would not survive the winter, but this feat still resounds through history.

CHARACTERS With Imperator we’ve introduced a new, more advanced, portrait system. It’s predecessors had portrait systems that used 2D images, but we’ve moved one dimension up to full 3D characters. What this allows us to do is create more memorable and dynamic portraits than in earlier games, as well as feature a much bigger variation of appearances. At the core of this new character interface is a true DNA system, generating characters that inherit traits and looks from their family. The first step as we were figuring out what system we wanted was to create a set of conceptual character portraits. These are the two characters you can see on the next page, though they are not game-opimized. They served as a visual target for our ingame portraits, and helped us coordinate creative vision and style across the art departments. We decided to go for a fairly realistic, slightly idealized style with a warm color palette to match the feeling of grandeur and the visual appearance of the rest of the game.

In Imperator, character portraits feature a plethora of hair styles, clothing, eye colours and facial features - allowing us to generate truly unique characters. This system also ties into gameplay: As your characters age, you will see them grow more wrinkled and elderly. In Imperator, you can follow a patrician son through his life from childhood and see the very same man as he’s become an old wizened senator. A lot of effort was put into making our new system capable of representing the many and widely different cultures of the game’s era. From the germanic tribes in the north to Dravidians in southern India, we spent a lot of time creating clothing and hairstyles to make sure each culture got it’s own, distinctive look.

Early on in development we designed two concept characters to give an idea of how we would approach portraits in Imperator: Rome

UNITS IN IMPERATOR As in our previous titles, armies on the map are represented by a single unit. To show off the new graphical qualities of our Jomini engine, weâ&#x20AC;&#x2122;ve enhanced the level of detail in all aspects of our unit design. This means unit models have considerably improved lighting and textures, but it also heralds advances on the animation and sound design fronts. With our new animation system, soldiers will now engage in actual animated combat - with both armies attempting to parry and dodge eachother. Rather than flailing into the void like in older titles, we strove to make combat in Imperator entertaining and visceral to watch, as you anxiously see the victory bar sling back and forth in a decisive battle.

In Imperator, every culture’s unit features distinctive shield and cloth patterns. This helps player tell similar cultures apart from foreign agressive, and makes all armies visually distinct. Stylistically, Imperator has moved towards a more realistic lighting model, first introduced in games like Hearts of Iron and Stellaris. The ‘PBR lighting system’, as it is sometimes called, allows for realistic reflection and diffusion properties of armor and cloth, bringing ancient armor and shields to live.

With our improved animation system and the added fidelity of the Jomini engine, units will now directly strike at each other. Watching battles from the world map will be much more fun and visceral in Imperator.

INVAS ION OF DOVER What we know now as Great Britain was only a vague land of savage farmers to most Romans. Julius Caesarâ&#x20AC;&#x2122;s invasion of Britain in 55 BC was meant to land at Doverâ&#x20AC;&#x2122;s natural harbor. Dissuaded by the sight of a line of British warriors waiting on the clifftop, he waited until the best opportunity and the best location. He eventually found a beach a few miles from the cliffs. The landing was still opposed by British warbands and chariots, but eventually the great conqueror was able to set up a fort. Despite his might, Caesar was unable to establish a lasting presence in Britain.