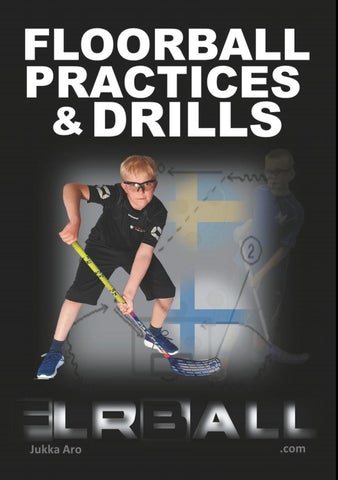 Floorball practices and game Floorball has always been a quick game requiring individual skills combined in a team play. Today the pace of the floorball game and the speed in performance and the reduced time for decision making is the big difference compared to earlier. Everything goes a little bit faster and quicker out in the rink and so does the thinking and decision making as well for the players. This will also change or put different types of demands on you as a floorball coach, you need to work with frequency and speed in execution of the drills, or build the drills in that way that these components are included, the time to do and act on things decreases all the time and will continue to decrease. Although in todays society we face a situation where the activity level among children is dropping dramatically, which naturally affects the physical capacity. A recent study in Finland shows that even active children in sports teams just pass the bar for recommended activity level. The goal for a 12-year-old and older is to train 18 hours a week (be physically activated, in other words not just organized training). The surveying group (active athletic children) only average 13.4 hours a week, this means that a 16-year-old athlete will miss about 2,000 hours against the goal, important to remember when we start talking about the 10,000 hours 6

later. The lack of training and good physics also begins to appear to the team coaches. The poor or lack of basic physics of the children gives completely different types of challenges to the coaches in the team. The coach will find it difficult to, for example start teaching certain physical skill, if it is difficult to get down in a squat position. Or to practice more advanced steps of skills, if both physics and coordination are several years after the actual age. Looking for underlying causes for the inactivity is not particularly difficult? ... or is it that children today have completely different types of talent and skills with them and that the coaches have not understood it yet? Today the young players will have a well-trained and quick brains â&#x20AC;&#x153;thanks toâ&#x20AC;? all console and mobile games, they have practiced to read the surrounding in a game in fraction of a second and base their decision and next move on that. This is an advantage, even if itâ&#x20AC;&#x2122;s not many times seen that way. The backside is of course the lack of physics, due to all hours spent in front of a screen, instead of being spontaneously physically active (running, climbing, playing outdoor games, floorball etc.). Therefore in many drills at least in the beginning of the book there is a big focus also on the physics, sometimes purely focusing on the running skills, coordination and body control.

In floorball you do not only perform a repetitive "locked movement", but floorball is about a combination of interlinked movements and skills. We can take an example, just before a scoring situation: Fast running forward (reaction speed, running speed), pass reception (eye-hand coordination), fake with lateral movement (decision making, eye-hand-body coordination, balance and weight transfer), shot in motion (decision making, speed, explosive force, balance and weight transfer). Floorball is about interconnected movement patterns where the various mental and physical skills are linked together and used simultaneously. That is why this way of thinking also needs to be included in the planning and design of floorball drills and off-season practices, together with situations that reduce the time for performing a skill. One way to reduce the time to perform a skill is of course to use 1 vs 1 situations or competition, another way is to reduce the practice space, to perform the drills in a smaller surface with faster speed. Small areas increase the speed in mind and execution. Reduced space will also mean less players queuing and waiting, and therefore you will increase the number of repetitions a player makes during a practice, 10 000 hours is required to become a â&#x20AC;&#x153;masterâ&#x20AC;? on what you do or 10 000 repetitions to automatize a movement. This thinking is the base for all the floorball drills in this book, many active players, working on a limited space and with 8

limited time in order to face todays requirements in floorball, quick action and quick decisions. About the drills All the drills are drawn, so you can use it on different parts or in different sizes of the training area (full rink or as a small station). The two first main chapters focus more on the basic skills and the later ones will have more advanced skill, game, passing and shooting drills, but still mixed with some basic drills, using the basic skills in game situations or more advanced game sequences. I have chosen not to define an age when you could or should use the drills, since itâ&#x20AC;&#x2122;s more connected to the maturity of you players, sometimes a 7-year old can perform a drill on 12-year level or it could be the opposite. The 12-year old need to start with more basic drills. Sometimes there isnâ&#x20AC;&#x2122;t a shot included in the end of the drill, to focus more on other skills (passing, movement etc.), but itâ&#x20AC;&#x2122;s easy for you just to add on the shot moment if you want. Some drills will reoccur in different chapters or with a slightly different purpose.

Like I already mentioned the key is to perform the drills with time limit preferably on a small surface, to improve the execution speed, but also the mind speed (decisions) Below you have some examples of how you can split up the training area into stations where you run different drills. Example of how to split up the practicing area from 1 to 8 stations.

On the next page you can see an example on how to place the drills to make the maximum usage of the training area and to activate as many players as possible to get the possibility to do many repetitions and practicing instead of queuing and waiting. The example includes some drills from the beginning of the book and some from the later part.

In the previous example, the seven stations are to be seen as â&#x20AC;&#x153;individual stationsâ&#x20AC;? and the players rotate between these on your decision. What you also can do with the drills in this book is to connect some stations, in this example I have changed the purpose of an offensive drill (40) to be a defensive break out drill and connect it to the next station and drill (51). The drill 40 could also be located in the middle area as a quick turnover practice also to not lose one station.

Next some explanations on how you should see and understand the different symbols used in the drill drawings, although each drill has also a short explanation.

Skill drills basic 1 These floorball drills are created to make the best use of the practicing area during a practice, the drills are split up to small parts on the surface, so you can have many active players at the same time. Use these drills without ball first and then after few repetitions bring along the ball. The symbols donâ&#x20AC;&#x2122;t always show you to bring the ball along in these drills, but do it!