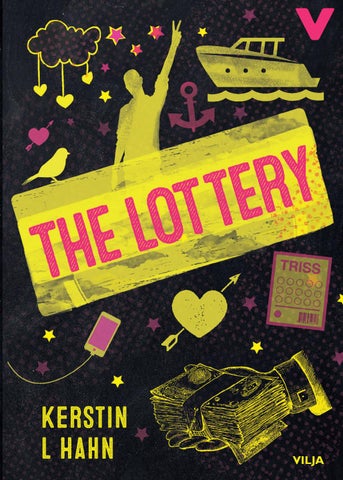 Friday the Thirteenth Viggo is sitting on the bus. It’s Friday the thirteenth, an unlucky day. But work is done for the week. That’s nice. Now, Viggo is going to meet Jack and have a beer. If it were sunny, we could find a place with outdoor seating, Viggo thinks. He looks out the bus window. The sky is grey. It’s windy. 3

We’ll have to sit inside the pub as usual, Viggo thinks. But it’ll be nice to have a beer, as usual. Or three, four, five beers … as usual. Viggo thinks about his dad. Out on the island where his dad lives, it’s probably sunny. It’s usually sunny there even when it’s cloudy in the city. This time of year, Dad is usually working on the boat. He’ll put it in the water soon. Dad is probably painting it and fixing it up, having a beer on the dock. Viggo would rather be drinking a beer on the dock than going to the pub. 4

Let it go, Viggo thinks to himself. Sitting here wishing he was on the island. Itâ&#x20AC;&#x2122;s Friday! He and Jack will go to the pub, have some fun, maybe meet some girls.

At the Corner Store Viggo gets off the bus at Brunnsparken. He checks the time on his cell phone. He has ten minutes before meeting Jack. Two girls, probably around 18 years old, walk past. They walk arm in arm, and their perfume smells sweet. Viggo watches them walk past. Theyâ&#x20AC;&#x2122;re not the type to look at him. They probably think Iâ&#x20AC;&#x2122;m an old man, Viggo thinks. 6

He’s thirty years old now. Thirty plus, really. Viggo walks into the corner store. He takes a pack of gum and puts it on the counter. You have to smell good in case you meet a pretty girl, he thinks. – Anything else? says the woman behind the counter. – Nope, Viggo says, taking his wallet out of his pocket. But he drops it and all of the coins fall out onto the floor. They jingle and roll away. 7

Viggo mutters to himself. He bends over and picks up the coins. The woman behind the counter smiles. – It’s Friday the thirteenth, after all, she says. That’ll be fifteen kronor. – What? Viggo asks. – For the gum, says the woman. – Oh, right. Well … I’ll take a scratch-off lottery ticket, too. – Even though it’s Friday the thirteenth? The woman behind the counter grins at him. Viggo nods and smiles faintly. – Yeah, even though, he says. 8

At the Pub Viggo and Jack are standing at the bar. It’s crowded and the music is loud. Jack takes a big swig from his glass. It’s his third beer. He’s well on the way to getting drunk, as usual. He leans toward Viggo almost screaming in his ear. He tells him something about the supervisor at his job. Viggo isn’t listening. He’s tired. 10

It’s Friday after all. His job at the warehouse is hard work: lifting boxes, unpacking, marking prices, and unpacking more. Viggo closes his eyes. He sees boxes and shelves on the inside of his eyelids. – Hey! Are you asleep? Jack nudges Viggo. – Come on, Viggo, don’t be so damn boring. Here, have another beer. Jack puts a fresh glass in Viggo’s hand and clinks his own against it. – And now, Jack says, it’s time to start the hunt. Check out the girls in the corner over there. 11

Two girls are sitting at a table in the corner of the pub. They’re really cute, maybe 25 years old. They each have a glass of wine in front of them. Jack pokes Viggo’s arm. – I’ll take the blond, he says. You can have the redhead. They’re both pretty, right? Jack walks toward their table. Viggo wishes they were at a quieter place. Somewhere he could talk in a normal voice. This has never come easily to Viggo. 12

Quick one-liners, sarcasm, joking around. – May we join you? Jack doesn’t wait for an answer. He just pulls out a chair at the girls’ table. He’s a little unsteady, but smiles broadly. He’s good-looking, with his brown hair and those dark eyes that seem to be able to charm every girl. – If you buy us a drink, says the blond. – Oh, so there’s a fee for sitting here? Jack jokes, sitting down. – Uh-huh, says the girl, and it’s not cheap. 13

She smiles, teasing him. – And here I am, broke, Jack says. He clinks his glass lightly against hers. Then he leans forward. – We’ll solve that, he says. It’s Viggo’s treat. Isn’t that right, Viggo? You owe me a beer. Sit down, man. Jack pulls out a chair for Viggo. Then he turns back to the blond again. He says something, and she laughs. 14

Viggo says hi to the redhead. She’s pretty. She has curly hair and faint freckles across her nose. – Sorry about my friend, Viggo says. He gets like this when he’s drunk. – And you, what are you like when you get drunk? asks the redhead. She smiles over the rim of her glass. What should he say? What would Jack say? Some quick, witty response? What? Viggo just shrugs his shoulders. Jack turns his head and puts his arm around Viggo’s shoulders. 15

– Viggo turns into a tiger, he says. A tiger on the hunt … Jack nudges Viggo. – Isn’t that right, Viggo? – A tiger? Like, endangered, you mean? says the redhead. Her eyes sparkle. – So maybe we should call a zoo? – And put Viggo in a cage? Jack laughs. No, he’s not that dangerous. Jack and the girls laugh. Viggo smiles. But it feels like they’re laughing at him.