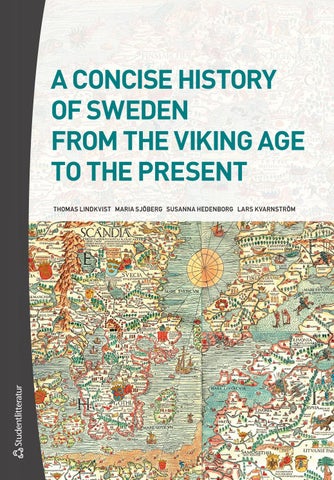 Copying prohibited This book is protected by the Swedish Copyright Act. Apart from the restricted rights for teachers and students to copy material for educational purposes, as regulated by the Bonus Copyright Access agreement, any copying is prohibited. For information about this agreement, please contact your course coordinator or Bonus Copyright Access. Should this book be published as an e-book, the e-book is protected against copying. Anyone who violates the Copyright Act may be prosecuted by a public prosecutor and sentenced either to a fine or to imprisonment for up to 2 years and may be liable to pay compensation to the author or to the rightsholder. Studentlitteratur publishes digitally as well as in print formats. Studentlitteratur’s printed matter is sustainably produced, both as regards paper and the printing process.

What is Sweden today?  8

The geography of Sweden  68 Power and politics  77 People and the economy  93 Communications  101 Faith and knowledge  105 Concluding remarks  114 Portrait: Queen Christina and the marriage issue  116 A Closer Look: Cities and urbanization  120

About the Authors  227 Recommended reading  229

This book is for anyone who is curious about Sweden and would like to know more about its history. The book provides an overview of political, social, economic, and cultural developments from the end of the 10 th century up to the 2010s. However, what has been regarded as the country of Sweden has not always been self-evident. The country’s geographical boundaries haven’t always been the same. When this story starts, there was no single Sweden. Instead there were a number of smaller dominions with no established hierarchy. From the end of the 13th century, Finland became integrated in the Swedish realm, and in the 17th century the southern and western provinces of modern-day Sweden were conquered, as well as territories in northern Germany and the Baltic countries. Wars and peace settlements brought constant border adjustments, and it was not until 1809, when Sweden lost Finland in a war with Russia, and after 1905, when the union with Norway was dissolved, that the country took on its current territorial boundaries. The book comprises four chronologically ordered chapters. The dividing lines between them are not clear cut. Chronological divisions are merely the historians’ way of imposing order on myriads of people and events, and they can be set up in many ways. In this case, the first chapter spans the Viking Age into the 16 th century. The theme of the chapter is the emergence of Sweden as a kingdom. The second chapter continues up to the early 18 th century and traces the main features of Sweden’s road to being a ©  T H E AU T H O R S A N D S T U D E N T L I T T E R AT U R

Great Power – and how this Great Power quickly collapsed. The third chapter takes us up the 1860s. The theme here is Sweden’s coming to terms with ancient authorities and privileges, culminating in a substantial parliamentary reform: the abolition of the Diet of Estates. This paved the way for new hierarchies. The fourth chapter deals with modernity, parliamentary democracy, and Sweden’s evolution into a welfare state, but it also takes up the last few decades’ privatization of social insurance. Each chronological chapter features a portrait of a personage who illustrates the spirit of the times: St. Bridget, Queen Christina, the scientist Carolus Linnaeus, and the politician Olof Palme. Besides the chronological surveys, there are special sections devoted to overarching trends in justice, demographic trends, and the emergence of cities. We have chosen to call these A Closer Look.

What is Sweden today? The Kingdom of Sweden is the official name of the country, which indicates that Sweden is a constitutional monarchy. The king is Sweden’s formal head of state but has solely ceremonial functions. The country is a parliamentary democracy where the Riksdag, that is, the Swedish parliament, passes laws, and the government executes the decisions of parliament. Parliamentary elections are held every four years, and the electoral system is proportional, with many parties to vote for. Since 1946 Sweden has been involved in the United Nations, and in 1995 the country became a member of the European Union, though, following a popular referendum, Sweden chose not to join the single currency of the Eurozone. Sweden is not a member of the NATO military alliance and has not participated in a war since 1814. On the other hand, Swedish troops have been engaged in peacekeeping efforts in the service of the UN, including action in Congo in the early 1960s and in Bosnia-Herzogovina in the 1990s. Since 2000 Sweden has sent soldiers to both Afghanistan and Mali on assignment from the UN. A country in the northern periphery of the world, Sweden 8

affirms its ongoing integration in world politics through its involvement in the UN. Sweden comprises the eastern part of the Scandinavian Peninsula, with Norway constituting the western part. In terms of area, Sweden is a large country. With its current borders, the surface area is 450,000 km2 , making Sweden the fifth largest country in Europe, after Russia, Ukraine, France, and Spain. In population terms, however, it is a relatively small country, with roughly 10 million residents (2017). This means that Sweden is relatively sparsely populated, and it has always been so. Since 1749, when statistics began to be kept, the population has steadily grown, but the increase has been relatively slow. Moreover, in the second half of the 19 th and the first decades of the 20 th century, a great many Swedes emigrated to America, which also contributed to the rather slow growth. The population is concentrated primarily in the southern parts of the country. About 80 percent of the population lives south of a line just north of Uppsala, and roughly 85 percent of the people live in urban environments. Currently the population is concentrated in the metropolitan areas surrounding Stockholm, Göteborg (Gothenburg), and Malmö. Sweden is an elongated country, from south to north. It’s nearly 1,600 km from the southernmost point, Smygehuk, to the northernmost, Treriksröset. Sweden is a northern country, with a large part of its landmass north of the Arctic Circle. Despite the great distance between north and south, Sweden is a relatively homogeneous country in cultural, economic, and social terms. Socially and economically, in comparison with other parts of the world, Sweden can be seen as a rich country – the life expectancy is above 80 years – and assets are relatively evenly distributed. As in its Nordic neighbors, gender equality is especially advanced. In terms of climate, Sweden is better off than corresponding latitudes of America and Asia, owing to the Gulf Stream. This is the warm ocean current that runs from the Caribbean Sea along the North American east coast and then turns northeast across the Atlantic toward Europe. This means that northernmost Europe, ©  T H E AU T H O R S A N D S T U D E N T L I T T E R AT U R

not least Norway and Sweden, has an uncommonly mild climate for its latitude. The climate is characterized by Sweden’s proximity to the sea and the prevailing westerly winds, and it can be described as temperate and humid. The mildest climate is found in the south and on the large islands in the Baltic Sea, Öland and Gotland. The climate is somewhat cooler in the north, in particular in the mountainous areas along the border with Norway. The average annual precipitation is 600–700 mm, though with regional variations. It rains most in southeastern Sweden and in parts of the mountains in the north. The driest areas are the large Baltic islands, Öland and Gotland. Sweden’s geographic conditions set the parameters for other societal features, which has always been the case. Waterways were long the most efficient transport routes, and today water resources help supply energy and provide households with clean water. Deposits of iron, copper, and silver played a major role in the medieval economy and constituted the foundation of Sweden’s industrialization. The same can be said for the country’s forest resources. Sweden can be divided into three major regions – Götaland, Svealand, and Norrland, which in turn are divided into historically important provinces. These provinces have been significant in the country’s administration and taxation, but nowadays their greatest role involves matters of identity. Their administrative function has been superseded by counties (in Swedish: län). Götaland is the southernmost part of Sweden and was originally a term for the two provinces of Västergötland and Östergötland along with Dalsland and Småland. Later on, the island of Öland came to be included, as were provinces that haven’t always been Swedish: Skåne, Blekinge, Halland, Gotland, and Bohuslän. Svealand is the historical name of the land of the Sveas, the middle part of Sweden, provinces around the lakes Mälaren and Hjälmaren – Uppland, Södermanland, Västmanland, and Närke – plus Värmland and Dalarna. 10

Norrland is the name of the northern two thirds of Sweden, with less than one quarter of the current population. It also includes Jämtland and Härjedalen, provinces that belonged to Denmark-Norway up to the middle of the 17th century. Sweden’s natural geography is varied. Agricultural areas are most extensive in the south, while forests dominate in the north. Sweden is a generally forested country. Conifers cover major parts of the country, including the south, where deciduous forests used to be considerably more widespread. Plains are relatively limited, with the most extensive ones in Skåne and Halland, as well as in Östergötland between Lake Vättern and the Baltic, in northern Västergötland between the lakes Vänern and Vättern and around the lakes Mälaren and Hjälmaren. The natural fertility of the plains has made them the most densely populated areas. In the north there is a large narrow mountainous area along the border with Norway, with peaks that sometimes exceed 2,000 meters. From this mountain chain, several major rivers flow eastward toward the Gulf of Bothnia. The southernmost of these rivers, Dalälven, is in many respects a boundary for the harsher clime in the north, with a lack of certain trees that are common further south, such as oaks. Dalälven is also an important social border. North of the river it was difficult for any aristocracy to gain a foothold.

A CONCISE HISTORY OF SWEDEN FROM THE VIKING AGE TO THE PRESENT This book is for anyone who is curious about Sweden and would like to know more about its history. The book provides an overview of political, social, economic, and cultural developments from the end of the 10th century up to the 2010s. The book comprises four chronologically ordered chapters. Each chronological chapter features a portrait of a personage who illustrates the spirit of the times: St. Bridget, Queen Christina, the scientist Carolus Linnaeus, and the politician Olof Palme. Besides the chronological surveys, there are special sections devoted to overarching trends in justice, demographic trends, and the emergence of cities.