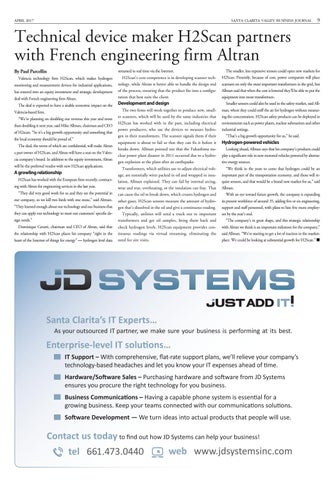 Technical device maker H2Scan partners with French engineering firm Altran By Paul Parcellin Valencia technology firm H2Scan, which makes hydrogen monitoring and measurement devices for industrial applications, has entered into an equity investment and strategic development deal with French engineering firm Altran. The deal is expected to have a sizable economic impact on the Valencia-based firm. “We’re planning on doubling our revenue this year and more than doubling it next year, said Mike Allman, chairman and CEO of H2scan. “So it’s a big growth opportunity and something that the local economy should be proud of.” The deal, the terms of which are confidential, will make Altran a part owner of H2Scan, and Altran will have a seat on the Valencia company’s board. In addition to the equity investment, Altran will be the preferred vendor with new H2Scan applications.

A growling relationship H2Scan has worked with the European firm recently, contracting with Altran for engineering services in the last year. “They did very good work for us and they see the potential in our company, so we kill two birds with one stone,” said Altman. “They learned enough about our technology and our business that they can apply our technology to meet our customers’ specific design needs.” Dominique Cerutti, chairman and CEO of Altran, said that the relationship with H2Scan places his company “right in the heart of the Internet of things for energy” — hydrogen level data

streamed in real time via the Internet. H2Scan’s core competence is in developing scanner technology, while Altran is better able to handle the design end of the process, ensuring that the product fits into a configuration that best suits the client.

Development and design The two firms will work together to produce new, smaller scanners, which will be used by the same industries that H2Scan has worked with in the past, including electrical power producers, who use the devices to measure hydrogen in their transformers. The scanner signals them if their equipment is about to fail so that they can fix it before it breaks down. Allman pointed out that the Fukushima nuclear power plant disaster in 2011 occurred due to a hydrogen explosion at the plant after an earthquake. Transformers, which utilities use to adjust electrical voltage, are essentially wires packed in oil and wrapped in insulation, Allman explained. They can fail by internal arcing, wear and tear, overheating, or the insulation can fray. That can cause the oil to break down, which creates hydrogen and other gases. H2Scan sensors measure the amount of hydrogen that’s dissolved in the oil and give a continuous reading. Typically, utilities will send a truck out to important transformers and get oil samples, bring them back and check hydrogen levels. H2Scan equipment provides continuous readings via virtual streaming, eliminating the need for site visits.

The smaller, less expensive sensors could open new markets for H2Scan. Presently, because of cost, power companies will place scanners on only the most important transformers in the grid, but Allman said that when the cost is lowered they’ll be able to put the equipment into more transformers. Smaller sensors could also be used in the safety market, said Allman, where they could sniff the air for hydrogen without measuring the concentration. H2Scan safety products can be deployed in environments such as power plants, nuclear submarines and other industrial settings. “That’s a big growth opportunity for us,” he said.

Hydrogen-powered vehicles Looking ahead, Allman says that his company’s products could play a significant role in new motored vehicles powered by alternative energy sources. “We think in the years to come that hydrogen could be an important part of the transportation economy, and those will require sensors, and that would be a brand new market for us,” said Allman. With an eye toward future growth, the company is expanding its present workforce of around 35, adding five or six engineering, support and staff personnel, with plans to hire five more employees by the year’s end. “The company’s in great shape, and this strategic relationship with Altran we think is an important milestone for the company,” said Allman. “We’re starting to get a lot of traction in the marketplace. We could be looking at substantial growth for H2Scan.” ■