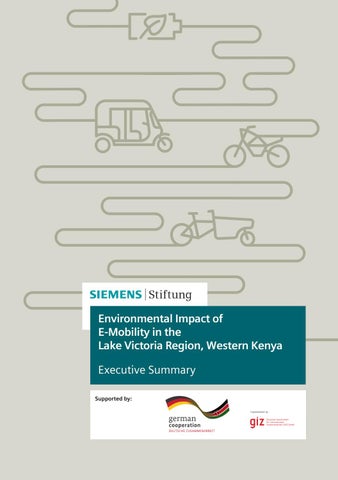 Executive Summary E-mobility in rural Sub-Saharan Africa has become a huge development opportunity and a perfect tool in the fight against air pollutions and climate change. In collaboration with its local implementation partner, WeTu, Siemens Stiftung has piloted an incubation program for e-mobility technology solutions factoring production, charging infrastructure and innovative business models in the Western Region of Kenya. As the rural economy utilizes two- and three-wheeled vehicles, light transport vehicles and fishing boats, it presents an opportunity to leapfrog conventional mobility to sustainable alternatives. Although environmental benefits such as Greenhouse Gas (GHG) abatement can be assumed from e-mobility based on renewable energy, it is crucial to quantify and accurately represent these benefits with data. Siemens Stiftung, with support from the German Development Cooperation, mandated this study on the environmental impact of e-mobility in the Lake Victoria Region in Western Kenya. The objective

of the study is to establish the GHG abatement potential as well as any other environmental benefits accruing from the adoption of e-mobility through a fleet assessment of the conventional two-, threewheelers and diesel outboard engines. This included a review of the policy landscape, highlighting existing policies aiding the shift and offering insight on future policy considerations needed for sector growth as well as an in-depth understanding of the impact of EVâ&amp;#x20AC;&amp;#x2122;s on energy demand. An assessment of carbon trade through government COÂ˛ compensation instruments and the voluntary mechanisms also contributed to the findings of the study. The study , which was carried out in Siaya, Migori and Homa Bay Counties from March to September 2020, incorporated a crosssectional design using both quantitative and qualitative approaches including primary data collection through key informant interviews (KIIs) with relevant stakeholders and focused group discussions (FGDs) and secondary data through literature review .

Fleet Assessment and Green House Gas Modelling The boundaries set for the Greenhouse modelling included: a regional geographical boundary accounting for three counties of Homa Bay, Migori and Siaya; the accounting only factors in the fleet numbers reported within the counties thereby excluding trans-county travelling. Emissions were determined only at the use phase, that is, the GHG emissions associated with fuel switch or adoption of EVs and emissions associated with charging electric alternatives. A bottom-up approach was used to estimate the GHG emissions as stipulated in Intergovernmental Panel on Climate Change guidelines for mobile combustion. 2-WHEELERS The fleet assessment estimated a total of 88,845 two-wheelers for Mbita, Homa Bay and Migori Counties. Two-wheeler operators, more so those operating their fleet for public transport, reported an average distance of 175 km/day for the town services. The annual vehicle kilometres travelled was 54,600 km. The fuel economy was estimated at an average of 2.1 l/100 km. Considering only the tank to wheel emissions (TTW), the total COÂ˛

emissions from motorcycle use for the year 2019 was estimated at 250,042.08t. 3-WHEELERS The total fleet number for 3-wheelers for Migori, Homa Bay and Siaya was approximately 3,063. Three-wheelers reported an average daily distance of 175 km/day which amounted to 54,600 km annual vehicle kilometres travelled. The fuel economy or approximate fuel consumption was 3.71 l/100km. The total emissions from the 3-wheelers were estimated at 22,896 t for the year 2019. OUTBOARD ENGINES Through FDGs with Beach Management Units (BMUs) and secondary data sources, the total number of diesel outboard engines for the Kenyan Lake Shore were estimated as 15,031 boats. Fishermen reported operating for 20 days in a month with an average fuel consumption of 25 l/ day/. Emission values for fishing vessels was estimated using the default values as indicated in the Intergovernmental Panel on Climate Change Guidelines amounting to 319,732 tCOÂ˛ for Y2019.

Environmental Impact of E-Mobility ABATEMENT POTENTIAL FROM E-MOBILITY The current penetration rate for e-mobility in Kenya is negligible. However, with technological advancements, reduction in battery prices, higher future motorization rates and the current shift from fossil fuels, electric mobility presents a pathway for GHG abatement in the transport sector. To estimate the abatement potential, projections were made for two scenarios: i) business as usual (BAU) and ii) a partial electrified fleet with increasing e-mobility penetration rates. Due to the limitation in historical data for the diesel outboard motors and three-wheelers, scenarios assessing abatement potential were only considered for the 2-wheelers. The partial electrified fleet assumed penetration rates of 0%, 10%, 25%, 50% for the year 2019, 2029, 2039 and 2049. The total emissions from a BAU scenario over the period 2019 – 2050 was estimated at 13,028,717 tCO². However, with the penetration of e-mobility the estimate emissions reduce by nearly half to about 7,770,717 tCO². Therefore, the total abatement potential (tank to wheel) of shifting from conventional motorcycles to a partially electrified fleet was estimated as 5,258,001 tCO² for the period of 2019 – 2049.

BATTERY DISPOSAL Typically, the battery lifespan for mobility applications is approximately 15 years. Therefore, even with increased uptake of electric vehicles, bulk battery waste will likely feature as an issue in future rather than present scenarios. The growth of e-waste streams will also cascade into the growth of companies well equipped to handle e-waste. The current challenges with E-waste management in Kenya include the lack of legislation and infrastructure for e-waste management; absence of frameworks for end-of-life; no elaborate extended producer responsibility systems. The 2019 draft regulations on e-waste management partially intends to address these gaps. The disposal options include reuse, recycle or recovery. Since the end of life, batteries are at 70% capacity and can hold and discharge electricity for another 7 to 15 years, the study concluded that re-use of the batteries in second life applications is the recommended disposal method. Efforts to ensure successful disposal will include developing a take-back mechanism and consumer education on the need for proper disposal.

Policy and Legal Environment Policies are crucial enablers for overcoming market entry barriers. In Kenya, a number of early stage policies have been proposed and instituted to support the uptake of EV’s elements. The study highlights further policy solutions to existing barriers at the market’s nascent stage: I Expanding EV model availability through incentivizing manufacturers or offering mandates on production. The Kenyan government intends to offer financial incentives to enable investors to utilize more local content as well as supporting research and development to motivate innovation and technology acquisition. These incentives, though not explicitly elaborated, can include offering subsidies, low-interest or interest free loans for the set-up of manufacturing units, stamp and land registration charge exemptions or discounts and offering a discount tariff for power. II Improving EV cost competitiveness through exemptions and discounts on import duty of electric two and three wheelers, road tax, registration fees and state goods and service tax and exempt tax on parking fees. A reduction or tax emption of components such as battery

technologies will also play in tune to reduce the cost of locally manufactured EVs. III Accelerating EV deployment across the public and private fleets - Through a public leasing policy for the public sector, the government intends to expand access to locally manufactured vehicles which will encourage deployment of public EVs. The reduction of excise duty for high capacity vehicles is also expected to encourage the uptake of EVs. Financial incentives such as tax holidays for private companies operating EV fleets will also encourage the uptake of EVs. IV Developing charging infrastructure network include unifying charging standards and interoperability, streamlining the permitting and inspection process, integrating electric mobility zoning laws and land-use policies, defining a clear role of distribution companies, tariff design, permitting process and data privacy. V Raising public awareness – Mass communication and campaigns to raise awareness on the benefits of EVs will be necessary to drive demand.

Charging Infrastructure At present, setting-up of charging infrastructure in Kenya has been driven by private players in urban settings such as malls interested in attracting traffic to the business premises. Whereas energy utilities are best placed to build both public and private charging infrastructure, interviews with a KPLC representative indicated that the utility does not have the capacity to setup infrastructure. The study concludes that in this case the recommendation is to adopt a similar approach to India’s Regulatory Commission which has put forth a proposal of new business models for charging infrastructure

which allows for distribution companies to operate charging infrastructure. This could include: • Equipping residential buildings and parking spaces • Retro-fitting existing networks of petrol stations into charging stations • Swapping stations set-up by private actors to allow for cheaper electric two‑wheelers However, this must be accompanied by setting standards and enabling wayleave policies for infrastructure spearheaded by the energy regulatory authority, EPRA, KPLC and the Ministry of Energy.

Conclusions and Recommendations Based on the findings, the following are the key conclusions and recommendations: • Supporting policies are crucial enablers in creating enabling environment for the EV market. Notably, a reduction of excise duty for high capacity vehicles and establishing standards for EVs is a start point, however, government agencies need to develop policies offering both financial and non-financial incentives to spur growth and demand for the sector. Key considerations are policies which will enable the setting-up of charging infrastructure and lower tariffs that will carter to charging of electric alternatives. • Because of the increased uncertainty of the Carbon markets, there is a decline in the number of private sector players interested in selling Carbon credits. Consequentially, with consideration of a project’s size, scale and timelines, alternative schemes and sources of funding such as climate funds are more tenable as a financial resource. Any considerations for carbon trading in the voluntary markets will require a project developer match the project characteristics with the interest and the needs of that buyer. Most of the voluntary buyers are often motivated by the uniqueness, the story and the additional

benefits to the communities and their ecosystem such as conservation of wildlife in areas where such projects are developed. • The set-up of charging infrastructure in the rural areas, at this nascent stage, will fall on private actors. Ideally, KPLC is best placed to set-up charging infrastructure network but it is noted that they lack present capacity to carry out the task. Additionally, the grid reliability in the Western region is problematic and altogether unavailable for more remote areas. This presents an opportunity for mini-grid developers to set-up charging stations within areas for operation. • Streamlining sectoral coordination is necessary to advance the sector. Importation of EVs still encounters different challenges. There is no provision for prototype registration, under KRA and NTSA. All imported EVs are marked as Nissan Leafs while NTSA has no dropdown menu for EVs to separate them by vehicle type and segment. Developing a prototype registration for the different vehicles requires institutional coordination between NTSA, Ministry of Transport and KRA. Though there is goodwill to see the growth of the sector, the efforts at present are fragmented in each department.

With the financial support of German Development Cooperation, implemented by Deutsche Gesellschaft für Internationale Zusammenarbeit (GIZ) the results of the study ‘Environmental Impact of E-Mobility in the Lake Victoria Region’ are now published. The study seeks to establish the potential of Greenhouse Gas abatement in addition to any other environmental benefits accruing from the adoption of e-mobility. The findings have led to three fundamental recommendations. More information: https://www.siemens-stiftung.org/en/media/publications/?_sft_projects=impact 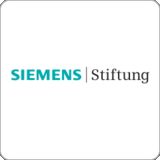