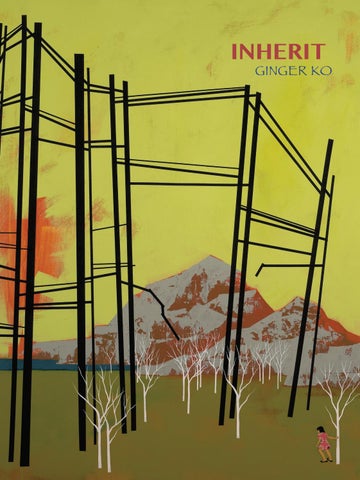 when I tumbled down the stairs lay with spittle across my face curdled whey-looking, why didnâ&amp;#x20AC;&amp;#x2122;t you ask after me then why did you keep your distance I hold it against her child looking up I nick my finger with the kitchen knife slicing crooked carrots child rounds her eyes at me astounded looks as if she would run away again as she did at my body she thought was dead palm-size egg of soft white soap

transl. Her mother pushed her out of the house and into beauty. Welts printed with palms, welts printed.

Men say we owe other men, or the world at large, the hum of culture and planetary heft. Photography has reached Jilin and I and my husband are the first to pose unsmiling. Plain collars. The husband still a boy, and looks younger still. He smudges the portrait with his restlessness.

I owe my small walls and the blank clacking of the Russian clock, so featureless the camera should magnify to view my considerations. From the edge. I owe my writing to the sounds of the world. The unseen space from which a mouse is shrieking.

transl. Her future husband’s parents travelled to find a physically sound daughterin-law and found her in China. The father invited her to lunch and asked if she wanted a chance at an education, to which she replied, “Of course!” He wrote her a student visa application at the restaurant table, and within months she was in America, a dull golden locket at her neck. She learned English and did not keep the first few pregnancies. She worked thereafter.

â&amp;#x20AC;&amp;#x153;Remember when you were married?â&amp;#x20AC;? he lunged and my teeth crowded back against my throat in fear rather than a dignified grotesque

a pilling and deflated bag of fur

transl. Her brother refused to feed their father after the assembly of the Politburo. She found herself a young, kind-hearted husband who opened and shut doors with a gentle consideration, who placed her breakfast on a tray in front of her bedroom door; it chilled and grayed before she awoke in the afternoons.

TO PURCHASE A FULL PAPERBACK COPY OF INHERIT GO TO: http://www.sidebrow.net/books/ inherit-ginger-ko