The Sacramento of Desire 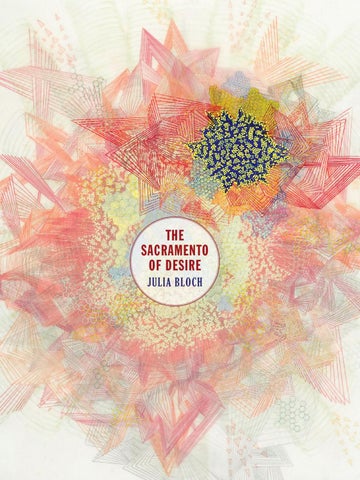 THE SACRAMENTO OF DESIRE JULIA BLOCH

Ovulept: the anthropogenic restructuring of ovulatory time by lungful emissions, endocrine disruptions, hazy particulates. Also: the reshuffling of markers of ovulatory time by thwarting, mediating, stalling, or occluding via market-based postures toward temporality as a condition for subjectivity or livedness or duration. Ovulation split into commodities: egg as service, mucus as surplus, odd cells and tissues, liquid channels of reproductive labor. Occluded from view by a small round word; no safe passage; it doesn’t last or stick; it sinks. A letter written in thick dark ink. Time measured by the slippage of a tiny physical object, by time congealed, by a bleeding sunset. A desirous incantation is repeated; so is an argument meant to persuade time to bend like a sentence. As feathers are not flowers and a toxic Sacramento sunset repeats and repeats until it doesn’t.

Or too soon whose womb rhymes with plot? â&amp;#x20AC;&amp;#x201D;Claudia Rankine

to write alongside, wait for the next adjective Wait for the next line; be not necessarily headed toward disaster. Not necessarily forwardthinking or rained down or stripped clean or subject to a ‘heavy’ infection. Not holding out for objects; more like drawing lines around the feeling in sugar, chalk-white and infuriating. Absent all that, to say the walls became ‘infected with color’ disturbs the logic of sight sense, but you knew that once you tore your retina

and got charged with error There’s mint on the tongue, but that taste isn’t written down anywhere. Ceramic chip lodged in the finger, glare coming off the lucite waiting room at the Hollywood WalkIn Clinic. Snip, snip. This is not some moment sailing toward the future. It’s not on paper, or lining a coffee table, scratched in ink, embedded in fiber or even starting to be a machine

and couldnâ&amp;#x20AC;&amp;#x2122;t, no matter how you tried, really be a machine Her head is filled with machines. One locks into her eyes as they rotate and refocus, and then the machine quits trying to be agency and starts to be machine. This joint is also made from bone â&amp;#x20AC;&amp;#x201D; the machine, desirous of being a flat plane? Made of words, again? Something else budding out from under that skin, like Jodorowskyâ&amp;#x20AC;&amp;#x2122;s flower? Or your eyes like a phoropter will it to be

as you snap your hands open Back in East Hollywood — I’m not trying to be angry or punchy or ‘in charge,’ just trying to tell the story. Around the corner from the elementary school, cacti stretch over the writing table like lamps, it’s easier to write with a low wall between the I and the you, to think about Leslie’s vessels before I am once again ‘completely’ driving to Bakersfield. Today there is only a temporary little wall of irritability. Red and textured, penning us in the road is killing my cycle

is lengthening Conjure the notion of a body to make another person. Or a body to make itself. Or a body to eat itself from inside. A body for drawing, for example, for moving in and out of the human area, which Alice says is over, yet there still is this body. Curtains of bodies covering each other and the earth. Crank the radio, air quality alert. Itâ&amp;#x20AC;&amp;#x2122;s quite a lot of driving from East Hollywood through Angeles National Forest past Lebec and Bakersfield to Delano and up toward Elk Grove and into Yolo County squirming wet valley to valley to valley has my seat turned red yet writhing all the time so you might as well

TO PURCHASE A FULL PAPERBACK COPY GO TO: http://www.sidebrow.net/books/ sacramento-desire-julia-bloch

The Sacramento of Desire