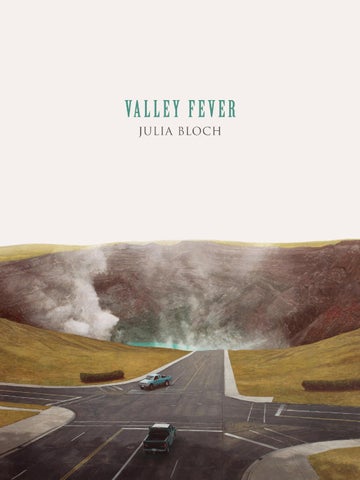 Compositionally, one could take this angle of the apartment and turn it to the greeny decay beyond the window, squirrel shouting on branch, paint lathered much younger than what it borders, silver spacing out the wall. Person at metal desk thinks Leonid showers must create a bright sort of clutter, that person tracks the motion of lead, an impatient eye submerges order under glass, arrows splinter the lead trucking in need through the fall. Dust of the heart and spine. Lead filtering a city.

Tipped futurity, ash as snowflake, a dress one gets laid in, a species of plastic that shines before an offtuned face, I mean your slackish mouth and the slightly separate set of strings it cuts itself on, tuned just a few degrees northwest toward this upper right hand, inherently clean. â&amp;#x20AC;&amp;#x153;They have a sea thereâ&amp;#x20AC;? the cabbie said on the way to the affective subway as I stroked your temporal bone.

Of bother. Smooth bowls in winter, winter on edge of something altering fast. At 18th Street, black pen hemmed into notebook, lady on bus says “Knock it off, the subway is down.” A clench that mimics the city, a building’s opposite account of glare. We choose the hit for envy’s sake. Seabirds are serene unless they’re flying. Stiff fingers in cold fog, a mouth working itself before a camera. The replacement, however. The lady says “I have a king, I have a king.” An animal moves inside the old wall that divides something living from something dying, no matter how many times we wash it.

A view from the train, as if a mixture of trees organized the water, or a face over the surface of a new set of structures in the water. One object hinges into another and we know it like ethicality, if only from a long view. There may be this view from a train, or the cooling effects of a train in winter inflecting sight, an altered tree, distance filtered from new structures, fibrous or laminate. I did hear on the radio about a “bad little cloud,” I did “click here to like this.” Then I watched the spilling trees.

Youâ&amp;#x20AC;&amp;#x2122;ve ornamented your hair with red shelves. The effect looks cluttered, but astronomical, the way a ship with no sails finds traction on waves like question marks. I am rather cold up here, I am parted by the hurrying world. Leave the commentary to busy laborers. Your battlestar betrays a melancholy slackening beneath its skirt.

I love a woman whose face is about to cry I don’t love it if she cries only if she is about to I’ve really only noticed this in the movies like Mimi Rogers in Lost in Space Like when a woman speaks and it catches in your throat Mimi Rogers holds the stylus, protests the departure I watch the globes at her throat orbit along a smooth blue line She is on the bed of wires Her hair rises over her collar like a sea I am sore sick at heart, I have almost long’d for woe

Fashioning that red cloud into the other museum. I am too old to remember that song. I mean in the way you do so fondly. I’m on the blind cellphone loosening the circuitry. Here’s a carbonized new decade and its ectopic embrace. Decades go on. We’ll catch up eventually. Meanwhile let’s overcook the food, let’s clutter up our salads and your upright face.