For Another Writing Back 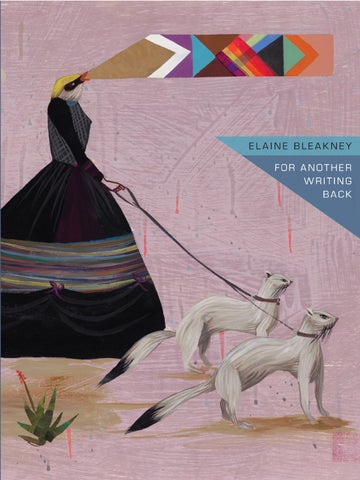 For Another Writing Back ELAINE BLEAKNEY

ACKNOWLEDGMENTS Thank you to the editors of At Length, Caketrain, Cutbank, The Volta, and Thermos for publishing selections from this work. Thank you to Jason Snyder, John Cleary, and Kristine Leja at Sidebrow for taking it on. To my family, teachers, friends, and friends lost, thank you for your generous, singular presences. To Endy. Ingrid. Paul: I cross that river just to be where you are.

This is the beginning of talking to you: deer in the yard. Every window in the house to see. The woman is out walking the dog. The man at night. All winter I saw the house on Cedar and its dilapidated twin, hidden by cypress. What I wanted first was solid and red but until I saw them both it wasn’t choosing. Then it was my blindness for one as the other hanging. I could almost see my pattern in the snow. Snow is right: slowing sight way down so our dog can walk us in. Her stepping clears us to each other. If it snowed all night the neighborhood is buried, awake. We go between two streets into the clutching trees and I lose her for a second. A boy we know lights up inside his house every time he hears the garbage truck. He sees the man swoop down, an arm at the curb. He sees his own house from the outside. He tells his mother he wants to be the garbage man when he grows up. This is Will: soon he will be almost too fast for us to see. For now he’s inside at home or at Danya’s. Where it’s not even knowledge about others. Maybe one or two facts. The woman who brings the mail in her truck: she waves or says something about I like that dog. I get to keep her, waving as she sifts for our house and our name.

Then in the same month the grass under the snow lightens and parts the darkest version of where we went quiet, driving to the store. The housewives on television gather in one of their houses to receive racks of clothes. Paul and I eat pizza, anxious for the moment when one turns to the camera. How they camera-speak is mean and approximate to what they say to each other as they fly through the clothes. I saw a hawk build her nest and Ingrid waited with me, sniffed around. A sediment of ice went in with us, cracked the grass where I wore snowshoes, boots with teeth. Someone making the show sharpens a question we donâ&amp;#x20AC;&amp;#x2122;t hear. The lake drifts over, hardening, and fresh ice falls through the warm, dark columns. I hold the leash. Ingrid goes out. Close to shore, I see the sound of my voice in a cropped, glassy wave. When I playback my poem on the computer later, I sound vain, defended. One of the housewives hides someone else on her face but the show doesnâ&amp;#x20AC;&amp;#x2122;t follow this as action.

When I get the mean woman at the checkout at Oleson’s Paul says think of how long they’re standing on their feet. They stand all day: he’s right. Then I also think there must be a place in their minds to float. One of them always smiles and I want to ask how it happened, if it’s the resin of some kind of work or was it born in her? My parents have money from my mother’s parents, and their parents before, who went in for railroads and oil. While my father’s father was the millwright, the one watching as if it would be endless — steel tubes needed from the #7 mill. My towheaded father and my mother in a pinafore dress are part of the river valley transported to where they happened to connect. And here. The phrase came from my father’s father: back of the hand. From my mother and my father how they set up, their time and its textures extended. When I have money worries, I pursue money, and then there’s some don’t worry conveyed. The woman at Oleson’s in this, all the women there and the swiping plastic card with us. What could I make within their care.

There was a spider hanging, stricken in its nest or another’s, when we first arrived. It was impossible to strike it out, about to try for work in the town. A spider makes a vulnerable portion to life. This one was far out in the path. As if we weren’t so exposed, we went out, stayed inside, read. Mornings I used coffee to write poems in the house. Living in a new town north of everywhere — at first, like going out to read landscapes. Then Paul got a substitute teaching job at the high school when the Spanish teacher started her maternity leave. I would go walking with her along Pabeshan. The lake tusked in its ice. At lunch, Paul would sit in the faculty lounge and come home with ideas about them. We would drive out for beers in Bellaire, define each other, play music, lose the best way home. At a certain point in every walk Ingrid would snag a branch to feel her own bad teeth. Then, turning the corner onto our drive, she’d skim into the banked snow. Swimming, I would yell, falsetto, swim: there isn’t much except how to be inside where our acts are deliberate, burning, and cause no one else pain.

The spider’s web stretched along yet indirect to the path. In all the images I returned to it. Sunlight fixed and a dune rising to our faces scratched with pine. I called it the moon. The spider’s body left in. It’s almost too random to bear, how I meet you, how you travel here. If you travel here in summer the town will turn to art shows. The same one, nearly every other week. Someone makes and plots all winter how she will get the summer people buying. Mostly cottage or sailboat paintings. I worked on my poems and sent them to places I could find on the internet, journals akin and apart to where I was. We go looking into these places. To judge. Then we turn on the radio and hear about the Green Beret who launched himself outside of us, his younger brother now joining up. Their parents in which house? Consistently, a drone we don’t hear. Our drone. Will you read on? For my tension, in your own interconnectedness. The deer caught up in the way I walked: woman with the dog, woman with the man, man with the dog, fawn in the yard, two, learning to walk. Their travel (seeing them) is listening.

When my mother gets to the house her mother is dying upstairs. She runs a bath for her. Why has no one clipped her nails? They clipped the hook in the tailbone where my neck hooked under the lake. Don’t touch me here. This is when the doula Mara turns Paul outside of me to say it’s time. Call Kristen now. Kristen is here in the dark with her stethoscope listening to him in my hips. She walks me back to the bathroom to the bed to the floor where we try dropping my body to help him down. Then it breaks. She takes the stethoscope out again to hear his heart. Time. Then the squat. Then the bed, hot. Paul scalded in me. Hot, wrote my friend Jennifer, hot, bomb, hot. I can’t shut Mara up: again, push, yes, this one, again. Kristen in her eyes my thought. Paul. The stink and winter outside. Kristen looking at Paul: how do we turn the heat up this isn’t fine and Paul running up to the box. Mara cheering shut up. Making Paul tea. It should have happened now? Paul updating into the phone shut up. Apple juice from a straw. Our dog under the table her bones heaped. Sip. What hours are. Now? Someone’s afraid. Someone in the room’s afraid. Kristen and Mara reading each other and Paul and then I’m pathetic. Then hope. Then another dim revolting wave.

I can’t animal I tell Kristen when she’s an eye. She knows he’s lodged. I don’t know or leave it says the tide. She’s reading me stay here okay. This is when there’s no one below. I can hear them. Dry and reading theirs to sleep. I don’t have to feel too far to prick the fear around us hours and hours. This baby’s coming. He’s not. I can see his hair says Mara. Then Kristen uses her fingers. Catheter. (When?) Wait don’t push now. I’m supposed to use the wave but it’s not right. He’s already made, can I go to sleep says my face into Kristen’s and she lets me have this one cold drop. Don’t mean it again or you’ll be fire. Push. Yes. I have to smear you Mara. There’s no one else in the storm or the house. I’m going to break your tea bone neck. Then Paul’s voice. Look. Look now. His brain falling out his brain between me now his shoulders and then Kristen’s on me suctioning out his nostrils mouth on his mouth. The placenta foals. We’re this? Then tucked on me his mouth he’s so. He’s so.

For Another Writing Back